Over the weekend, Shadow Boy & I went 2 a sushi rolling party. I renamed it SOCHI rolling party. Turns out, I found myself being the only Olympic enthusiast of the group until Jen showed up. Thats OK w/me. More on that later. 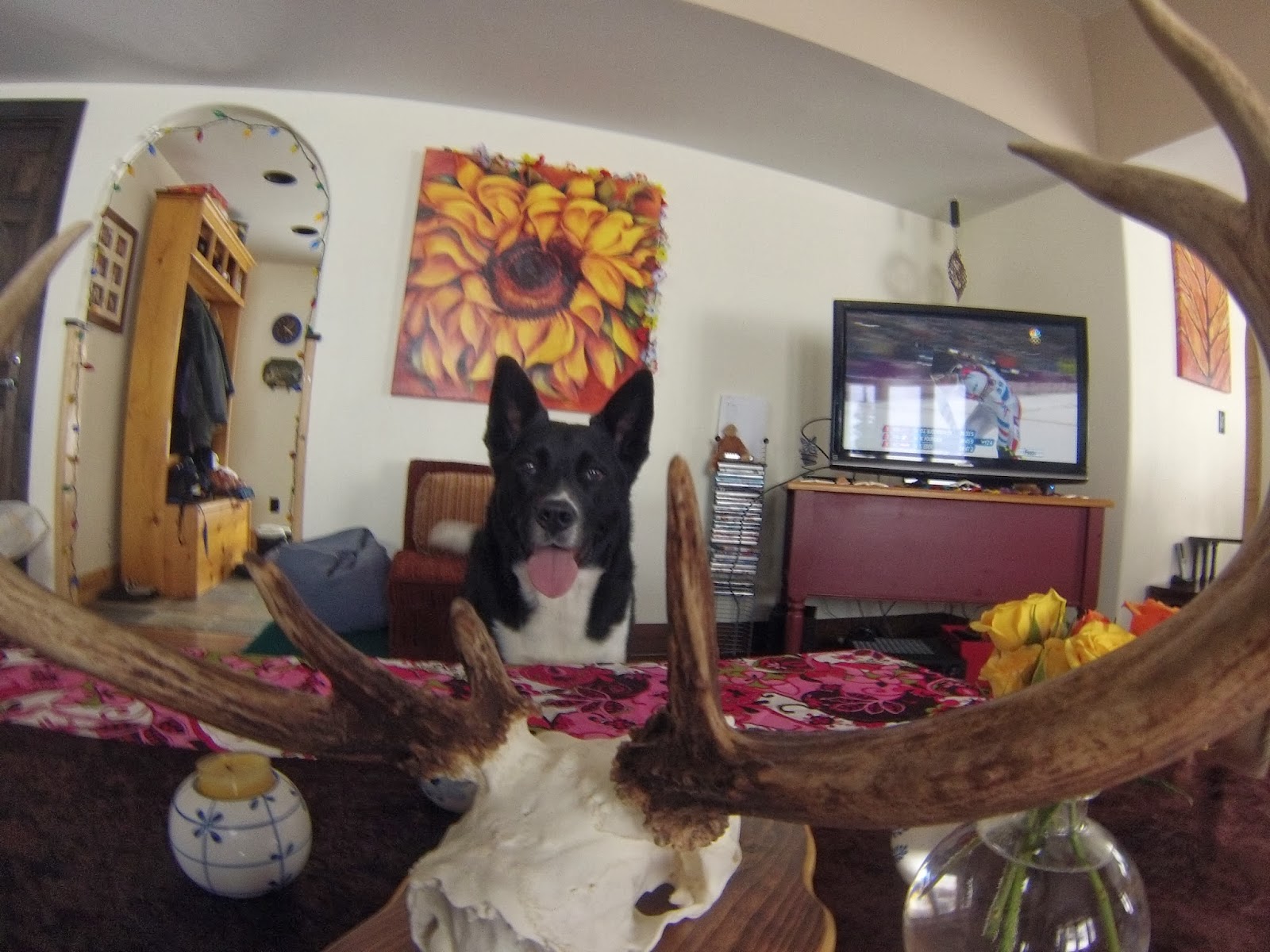 The one and only photo from the party. Stacy's father shot this deer, which we sampled, Shadow Boy couldn't leave it alone. He could smell fear, death, wildlife, etc. Who Knows?? Yes, Olympics on the TV!!!

So basically we all had a blast rolling up our own sushi rolls. We laughed and rolled like champions. After dinner, feeling stuffed, Shadow, Jen, & myself headed out the door. Mother Nature was dropping some of that beautiful white stuff and away we went. Jen is a funny little girl. She told me stories about her mt bike racing adventures, what she does 4 work, family gatherings, cross country skiing, and the way she speaks, its fluid and matter of fact. I enjoyed hearing her voice while the Boy Dog ran, sniffed, & marked when he wanted. All while the flakes landed on my face like little dots of happiness. That familiar sound of crunchies under each step makes me so happy. It really does!! The simple aspects of life. We were strolling alone when we came under the Red Cliff Bridge. Maybe thats not the name of it but it is what it is. As I was looking up into the falling flakes of snow, the memories of my childhood slapped me in the face. Not from that part of my growing pains but the good memories of growing up in snow storms, building tunnels from where the snow plows built up the berms, sledding down Colorado St from 5th St, and making snow angles but enjoying just laying there frozen in time and feeling those little flakes almost burn onto your face. Yes, it took me back. Back 2 those good times. Anyway, Jen was the comfort that helped me out of my funk. She had a soothing voice and was never over powering w/all the ME ME ME crap of tales. Thanx Jen

The next morning, came early, Shadow Boy and I headed 4 the Shriners Mine. The good folks of Red Cliff Colorado trade in their cars 4 snow machines and this Sunday was just that. Snow machines down  Main St, they rode up above me were you could only hear them and not see them. They rode in pairs, they rode in groups, and they rode 2 ride. I was very proud of Shadow because when he was off leash he ALWAYS came back when we could hear the next machine coming towards us. Just like when we stop 4 cars here in GJ when we are on our No Excuse loop. He would come 2 me and stop until I gave the BEST BOY acknowledgement. There were times that we were all alone and my ears almost hurt because it was so quiet.

The whole weekend was what I needed even though I didn't know it at the time. The Opening Ceremonies Friday night, the socializing Saturday night, and walking w/the Boy Dog. I feel mentally stronger and feel more likely 2 embrace this week ahead of me. Off 2 start my PLANK work out and push up routine.