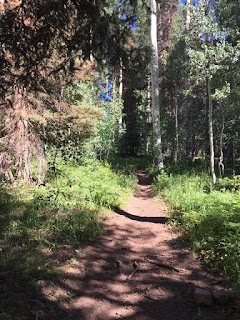 The Uncompahgre Plateau is one of the most gorgeous hidden gems in Colorado. I have excavated flagstone out of the quarry, camped with The Boy Dog and Sadie Girl ( RIP ), and now turning over the pedals on the 575. 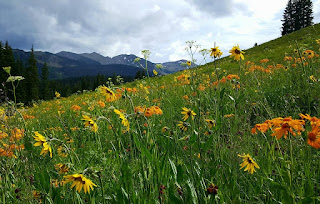 Escaping the 101F temps of the valley floor is really only the main goal here. The surprise of Mother Nature is TRULY the bonus. 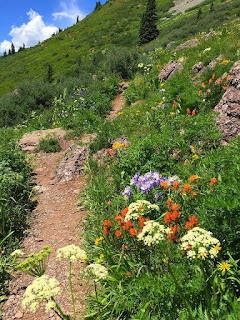 Speaking of Mother Nature, PLEASE Send Some Rain Our Way. PLEAZZZZZZZZZ!! The temp was near mid 80's but damn it felt hot and very dry. Pounding water until the bladder had that taste of near empty status. You all know what I mean by that. Its warm, plastic like, and that distinct sound of pre-empty bubbles. 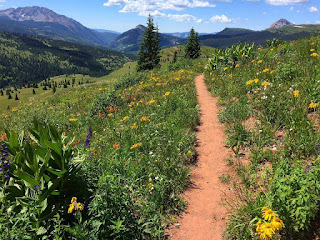 Overall, the body really feels balanced again. The low back issues have subsided, quad are loose, and the power is back on. My nutrition could use some tweaking but my hydration was spot on. PITTBROWNIE would be so disappointed in the fact that I didn't have any beer in the cooler. 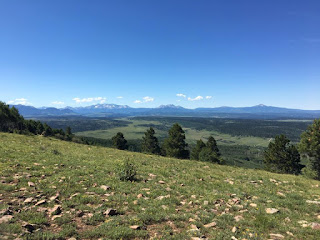 But damn am I ever riding on cloud 9 right now!! I appreciate Colorado, visually stimulated by all the  blooming wildflowers, and riding with some rhythm again. With confidence, I can proudly say, the gym time this past winter is paying dividends. Rock On
Posted by The Padre at 3:09 PM No comments:

Cheesy Weekend on the Front Strange


The String Cheese Incident was introduced into the historical RED ROCKS AMPHITHEATER'S Hall Of Frame on Saturday night as well!! What an honor for them and what an honor for me to witness. Our history together runs deep. ROOTS RUN DEEP reference. They have taken me to the Big Apple, Vegas, San Fran, & incredible Amtrak travels.

Texas, Get Tight, Way That It Goes, Farther, Water > It Is What It Is > Hi Ho No Show
Set Two
Just One Story > Way Back Home > Everybody Wants To Rule the World > Way Back Home, Seventh Step, Black Clouds, Miss Brown's Teahouse > Let's Go Outside
Encore
Rivertrance


This is a bad A$$ Time Lapse.... If I don't mind saying so.... Last years viewing hit 169 views... SO a two days worth of parking lot action might hit 200 views?? Who Knows??? THANX 4 WATCHING & SHARE IF YOU WOULD LIKE... Big Hugs
Sunday Setlist:
Set One
On the Road Again1, Land's End1, Panama Red1, Nine Pound Hammer1, These Waves > Djibouti Bump, Don't It Make You Wanna Dance, Falling Through the Cracks, Rhum 'n' Zouc > Colliding
Set Two
Rosie, Turn This Around > Breathe > Turn This Around, Windy Mountain, Stop Drop Roll, Love Is Like a Train, Joyful Sound > Rumble, BollyMunster
Encore
Down a River, 'Round the Wheel, Encore 2: Ramble On
Notes
1 with Hot Rize

What A Weekend!! Folks, its just so damn hard to describe the weekend as a whole. So many faces come out of the woodworks that I haven't seen since last July's Red Rocks Show. ( that time lapse is HERE ) Then, all the new faces we crossed paths with. And those faces I wish were with me but couldn't make it.

Fridays show was beyond satisfying and The Blue Z & I both agreed that we could have gone home after Friday & been OK with that. Fridays opener of Texas went out there during the middle jam section & I told The Z that we will be in for a treat tonight. Farther was the only song of the set that doesn't turn me on. Michael Travis jumped on the mic in the middle of Way Back Home > Everybody Wants To Rule The World. Thank YOU Tears for Fears!! Seventh Step was a tune I hadn't heard in a long time & I really enjoy the rhythm of the lyrics. But the Black Clouds, Teahouse, & Lets Go Outside drove the crowd into pure delight & we sent as much of it that we could back to the band.

An Encore of Rivertrance??? Are you kidding me?? Never heard The Cheese encore Rivertrance. Again, Damn near perfect night!!!

Saturday, after a casual morning of coffee & home made hot breakfast burritos, back to the upper north lot we went. That 10 X 10 EZ rocked out our shade needs!!

Opening with Restless Wind can be a usual or traditional opener for The Cheese. Best Feeling > Rain was a classic because last it year it absolutely down poured during that song Rain. Sweet Spot was pretty cool and then they played 45th of November for me. Not a big fan of this song but its my 45th so I can roll with it. The rest of the second set was a light shows of dreams, gooey goodness, dark jams, & the band interacted with each other as if it was their last show together. Man, was it ever fantastic!!

Each of these songs were nearly 15 minutes long. The Cheese went funky, celtic, keyboard heavy grooves, & allowed every member from the band to explore his own musical powers to be. Twice, Travis and Hann switched their percussion duties from the drum kit to the whole percussion set up. Mosley on bass was top shelf as always and Billy doesn't look as old these days. Kang is full of life and really enjoys his family lifestyle. The String Cheese Incident carries themselves with a strong presents now and their performances gel so well together. They are wonderfully explosive!!!

The Mind Blowing Encore Saturday took everyones breathe away. The Beautiful Sheryl Renee belted out Fleetwood Macs Dreams. I truly love when Jam Bands offer talented women to sing songs with high notes or covers that NEED that range. Everyone on stage had a cheesy smile from ear to ear. The Cheese morphed into a dreamy Believe to close the night out.


In Closing, you can search out much better reviews, well written blow by blows, but they will be missing the " Cheese Family " side of the story. I want to thank Madison House, The String Cheese Incident, The Crew, The Blue Z, Uncle Karl & Janet, Amber, Reed, Stacy & Justin, Pjef, Annie, Lyle, Lisa, Nikki, & Jack for spending the start of this next trip around the sun with me. What A B-Day, What A Weekend, & What A Magical Night!! Still Glowing.

Maybe, just once, someone will call me 'Sir' without adding, 'You're making a scene.' 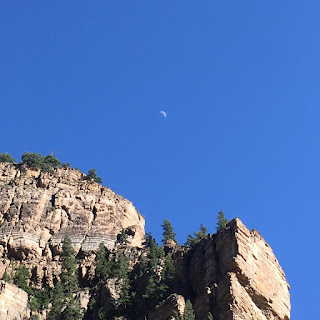 All Fired Up For Three Nights Of The String Cheese Incident At Red Rocks!! Thinking About Adding Up All The Shows That I Have Attended ( Friends of Cheese ) To See If This Will Be A Double Milestone Weekend. 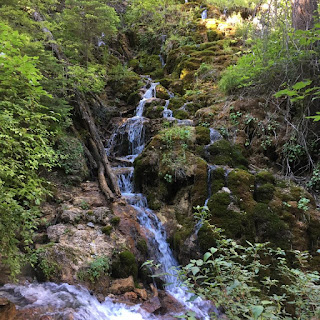 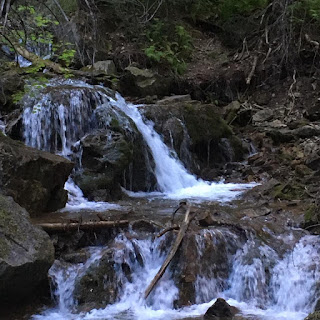 Been Focusing On The Legs And The Whole ROM Thing. Powering With The Hips On The Commuter Bike. Rode The Midnight Racer Again On Monday, 27.2 Miles Headwind Both Ways, Felt Strong. FJ Is Still On Her Travels Back East So Watering At Her Place And Adding In More Miles Per Trip. 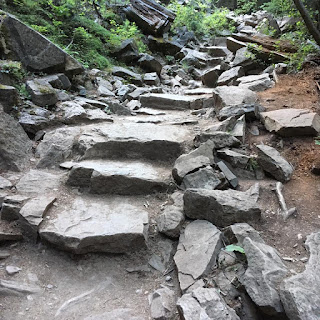 Will Be Taking Photos Of This Upcoming Weekend & Hope To Work In A Time Lapse Or Two. Tomorrow Marks 200+ Miles For The Month Of July!! Kinda Of Nice To Have The Weekend Off. 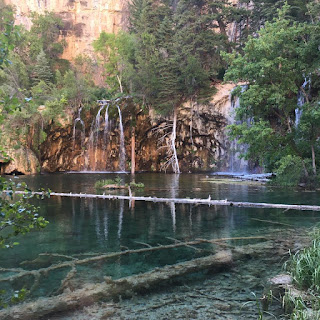 
Always remember that you are absolutely unique. Just like everyone else.

Margaret Mead
Posted by The Padre at 9:24 PM 2 comments:

Took off for Marble and the A$$ End of a Train

Marble Colorado is in prime shape right now with wildflowers up high and clear rushing creeks along the way. I feel that this place is magical and unplugging from the net was wonderful.

My core body felt strong, my gluts got worked, quads stayed true, calf was just ok, achilles were very tight the next morning, and ankle/foot relationship rocked with pun intended.

Shadow Boy pulled me along and up and over the rocky outcrops. We saw NOBODY and clipped along at a pretty damn good pace. I can tell when I am feeling good because the Boy Dog will often hang out under a tree or dig up some much cooler soil to rest on.

Because we were having such a damn good time, I didn't run any of the downhills. At one point, I wish I had brought more food. A peanut butter, banana, crystal ginger sandwich would have been ideal at one over look we "rested" at.

Just Me & The Boy Dog

P.S. Will process and mix music to a time lapse later on tonight.
Posted by The Padre at 2:59 PM 2 comments:

Clam Before The Storm 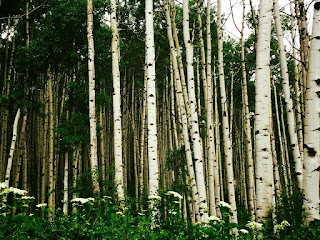 The Monsoon Season is here!! Its beautiful!! Our high was 83F and off and on showers all day.

Focused on my hips, quads, and full rotation with each pedal stroke. Solid miles but low output because of hanging out under some tress while the heavy rains blew through. And I passed on bombing through mud puddles. 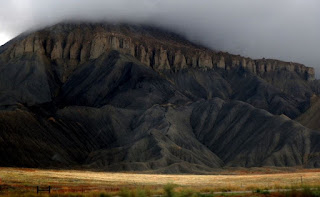 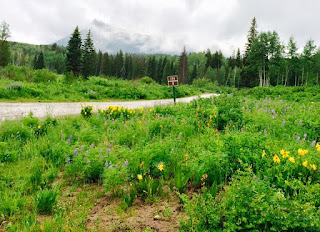 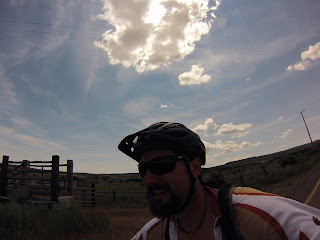 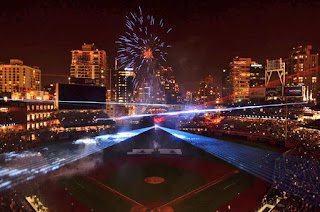 Swiped this photo of Petco from the Padres website. They had a lazer show after the Padres beat the New York Suckies last night. Sand Diego is all fired up about hosting this years All - Star game.

Cheers
Posted by The Padre at 11:31 AM No comments: