2day was my rest day…… SCORE…… I rode my commuter bike downtown 2 meet up w/the Western Slope Runners 4 their Thursday night run……. My Coach was there & wanted 2 have a little chat w/me….. As him & Patrick BLEW on by me during our Tuesday trail run, he noticed that I looked as if I was wondering around a dead concert…… "Thats not training." He says….. I had 2 laugh because its true…. I enjoy hiking & not much of a fan of suffering….. Just before everyone started showing up 4 the run, Tim took me on a "walk" around the block….. Dude, he can cruise & I had 2 fall forward ( run ) at one point 2 keep up…… He wants me 2 be able 2 cover a mile in 13min 4 a least 5 miles at that pace….. He explained how I will begin 2 notice what that pace will feel like….. He gave me tips on how 2 run hills during an event…… We worked on how 2 walk w/our hips in motion…. And it was amazing how quite his steps were compared 2 mine…… HINTS: footfeather is his blog & how I found him…… We didn't go all that far but I was winded & oh my peroneus longs muscles were on fire….. More stretching & way more water…… I was pleased 2 be back on the bike & rode w/a group of 3 gals while they ran the 5 mile route….. By the way, the Mighty Colorado River is ripping through town these days….. I enjoyed my ride, we all took turns talking about solving world problems, they asked me about my Ortho training, & we waved & smile 2 other runners & riders….. The river trail was quite busy & that makes me smile….. So 2day I will hit the track & walk the 440 at a 4:30 per lap pace 4 a solid 60min…… Tim wants me 2 really concentrate on hip movement, feeling the pace, & notice what I notice….. I am looking 4ward 2 this training day & should hit 3 miles or more by doing this….. We Shall See……  HAPPY FRIDAY FOLKS
Posted by The Padre at 9:30 AM No comments:

Feeling Stronger…… On the schedule was a 45min walk around the track so that I could "notice" the 4:50 per lap pace….. I took Shadow Boy & got busted…. No Dogs on the track….. So we went on downtown & I was amazed at how full the bars were 4 a Wed night….. My legs are feeling so much better….. No pain in my ribs….. My posture was better & didn't need 2 remind myself….. My right hammie was tight 4 some reason……. Felt like I accomplished everything on my agenda PLUS volunteered at the Vet….. Jim Herrington is tiling his dog kennels…. We are far from finished but worked 4 awhile last night….. Feels good 2 give back…. I am booked until Monday…. I will try & update my training over the next few days

Day #1 of my Epic Journey 2Wards The Lead King 25K 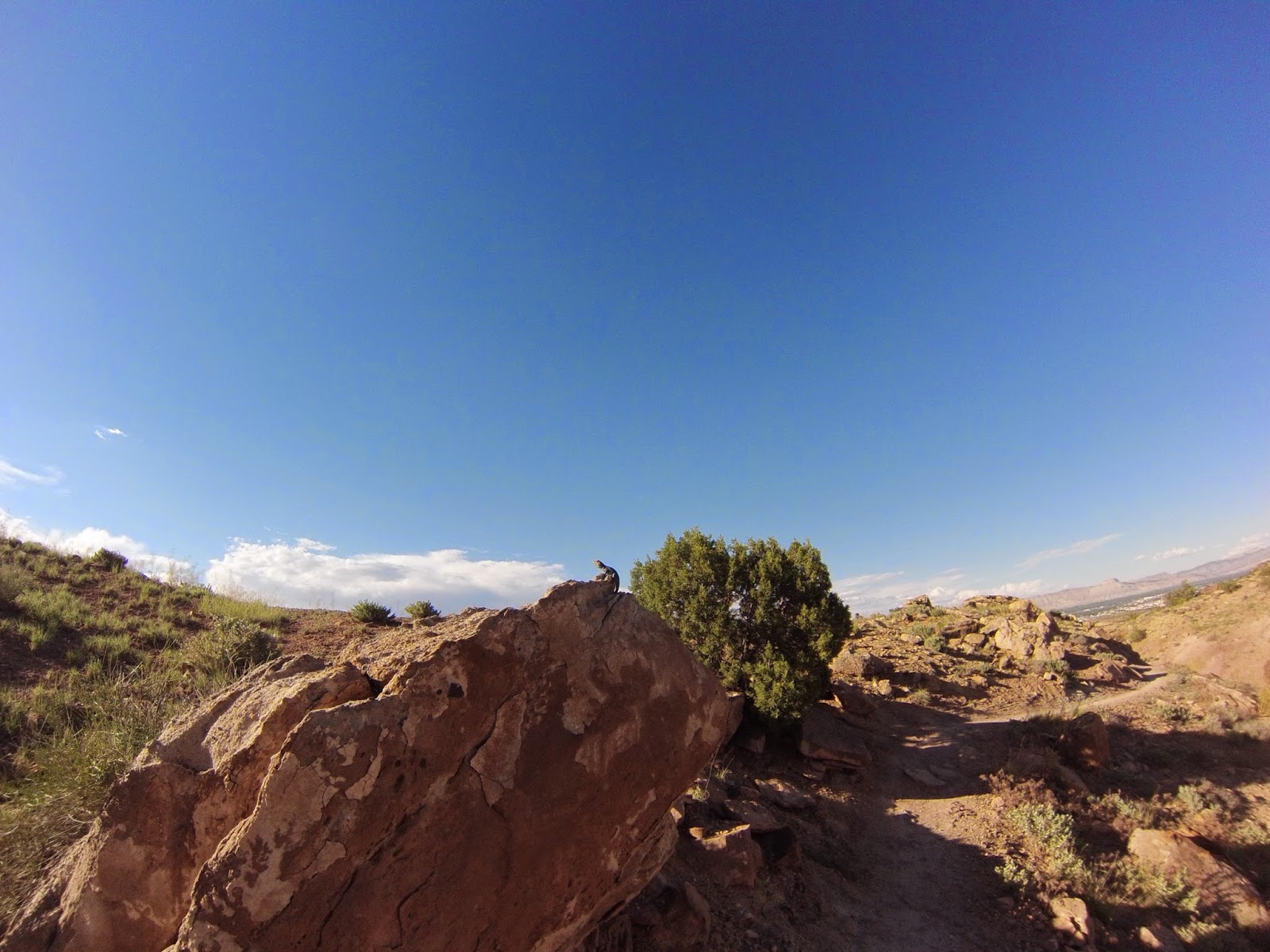 On The Schedule 2day Was A 60min Walk 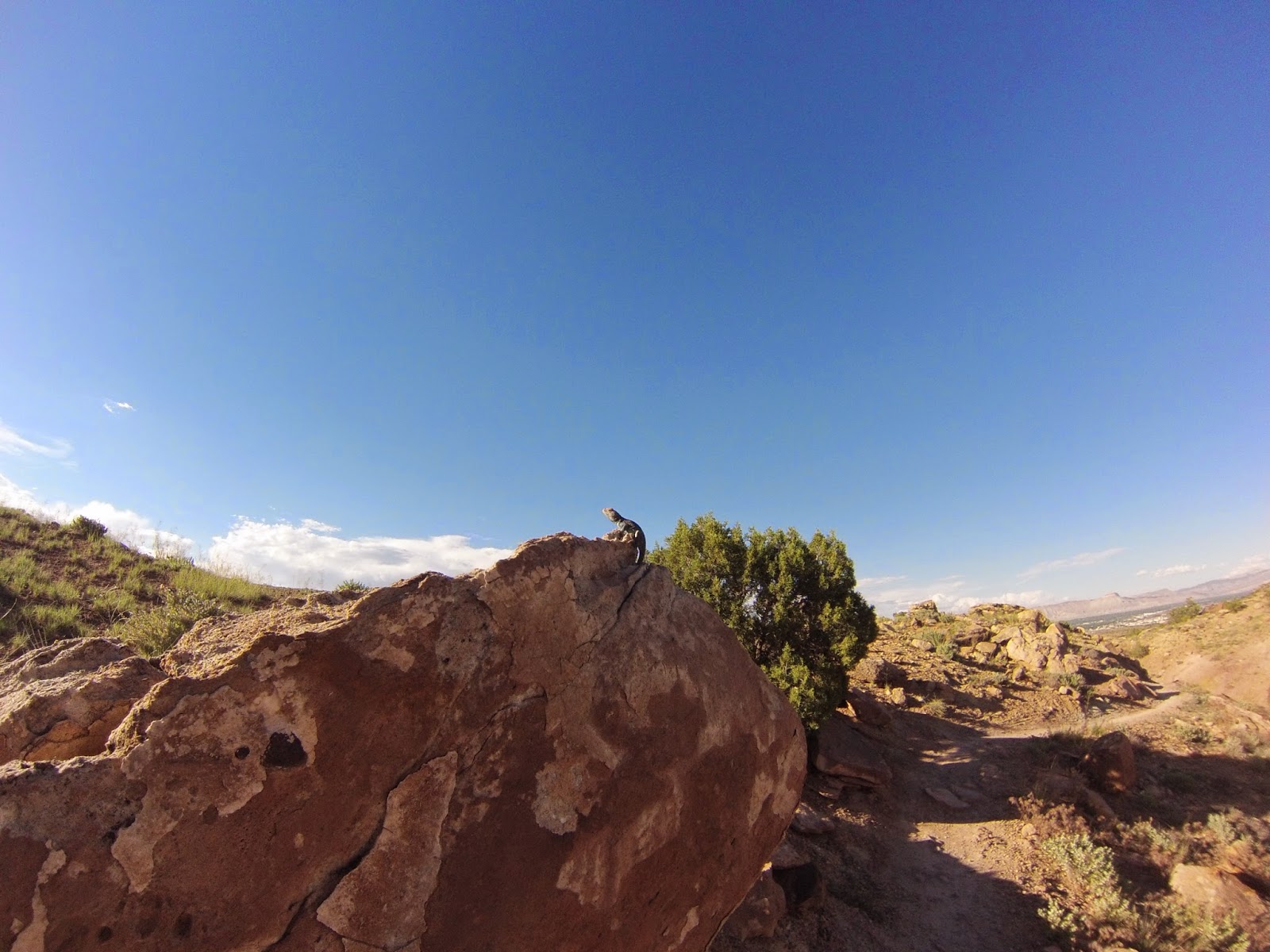 SO I jumped on the commuter bike & headed 4 the Lunch Loops 2 meet up w/the Western Slope Runners. I noticed my left quad wasn't as smooth on the ROM end of things. I backed off almost all power & reminded myself that it is only the beginning of the ride & beginning of a wonderful journey 2wards a huge goal. The ride 2 the Lunch Loops took me 25:49 & that includes all red lights & what nots. 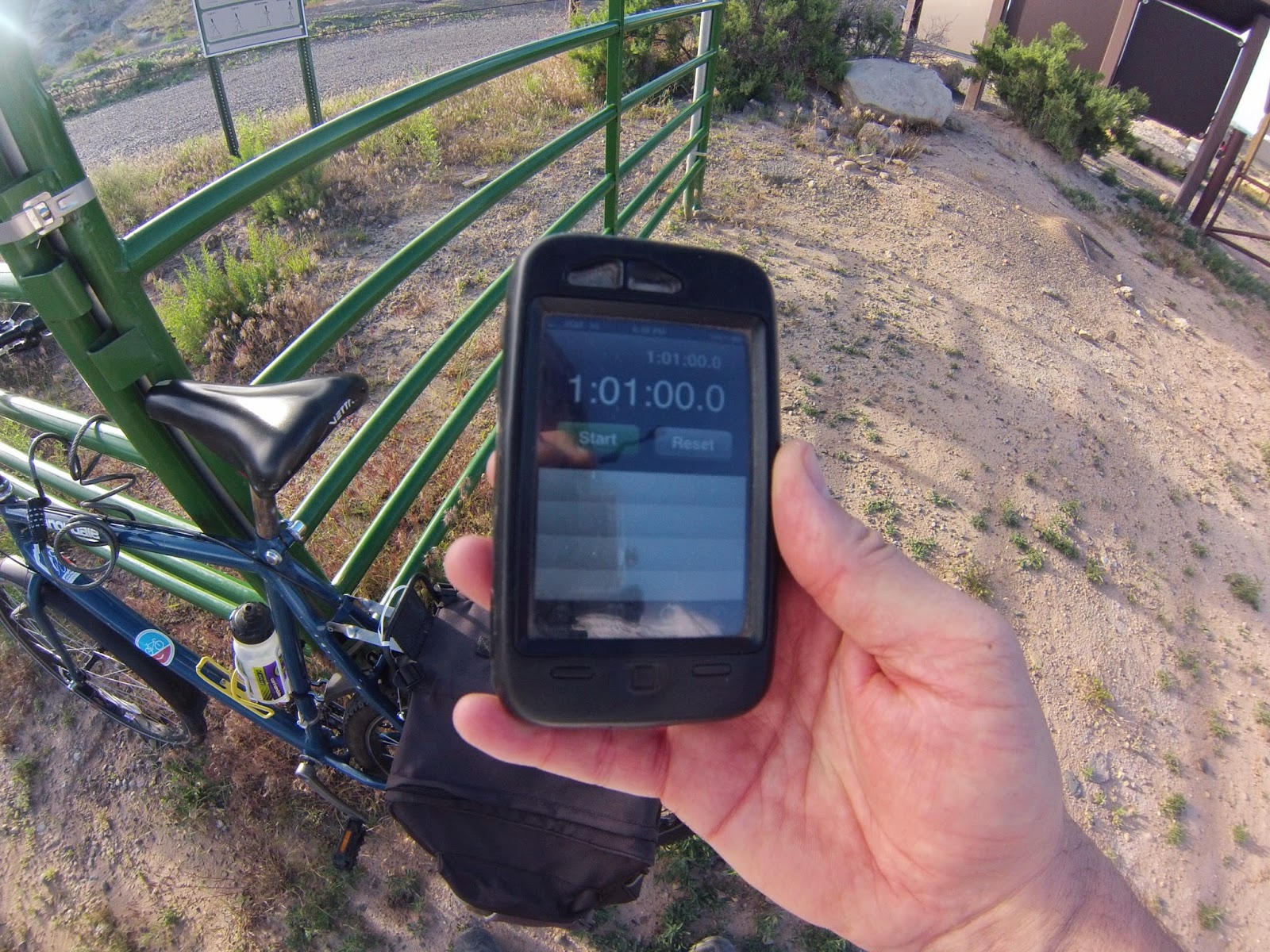 After a relaxing uneventful ride, legs felt better after warming up, it was time 2 lock up the bike, & get moving. I headed up Pet-K-Kes &that trail  intersected w/the main Tabeguache Trail. Their map claim appox 3 miles & that took me 38:25 & I was quite pleased by this. I wasn't running, not killing myself, just hiking on up the trail. Totally stoked on how my body felt, temps were around 83F, & my overall attitude was upbeat 4 sure. I couldn't believe my eyes when I looked at the time as I finished. I nailed the 1hr walk like my schedule asked of me 4 the day. 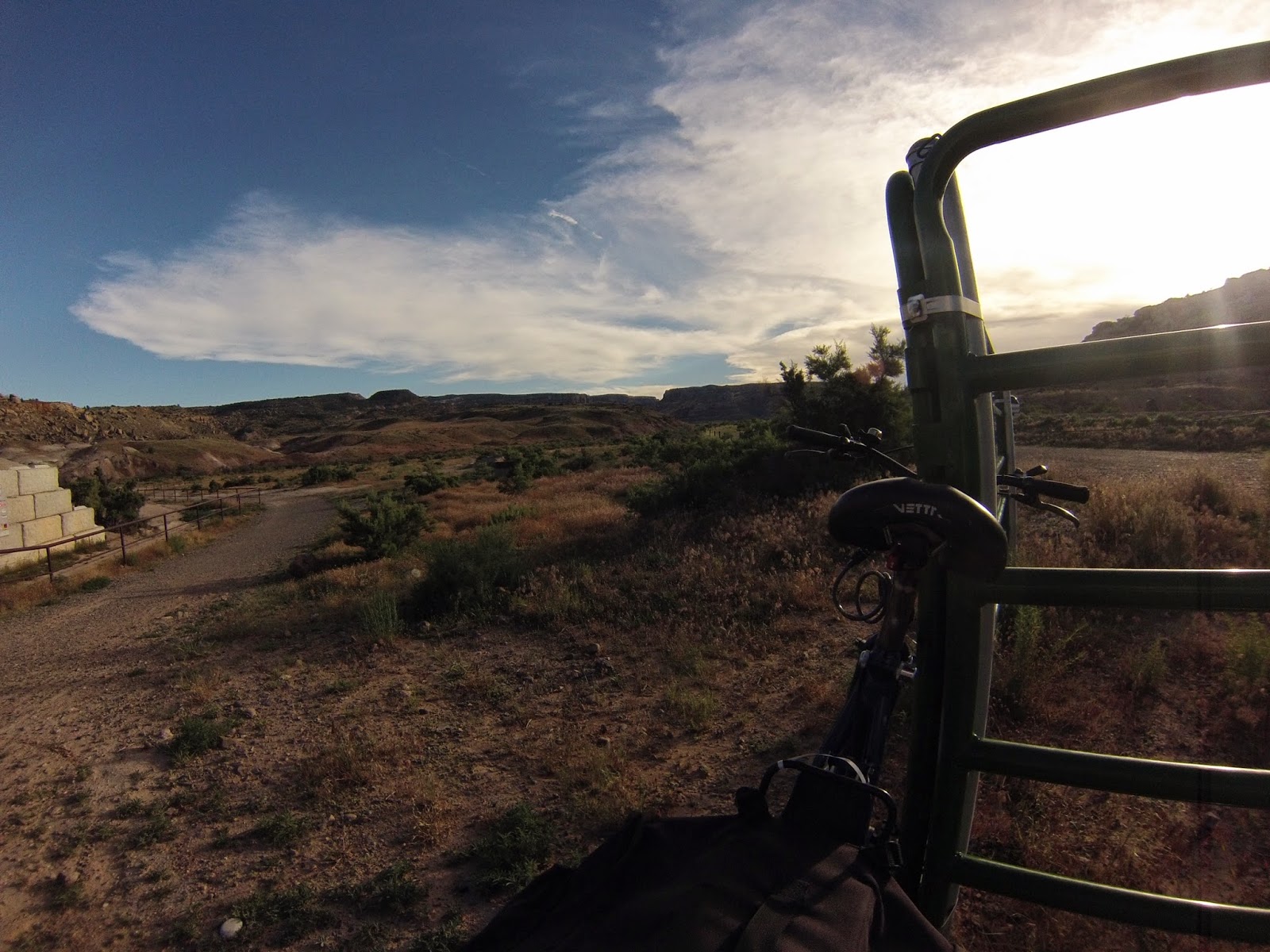 Unlocked the bike & off 2wards the city I rode. Mostly downhill & the traffic wasn't as bad by this time. I noticed that my legs weren't 100% but not failing by any means. I defiantly wasn't going 2 push it OR over due it. So I just rode & sipped water when I wanted. Rode back in an easy 23:03. 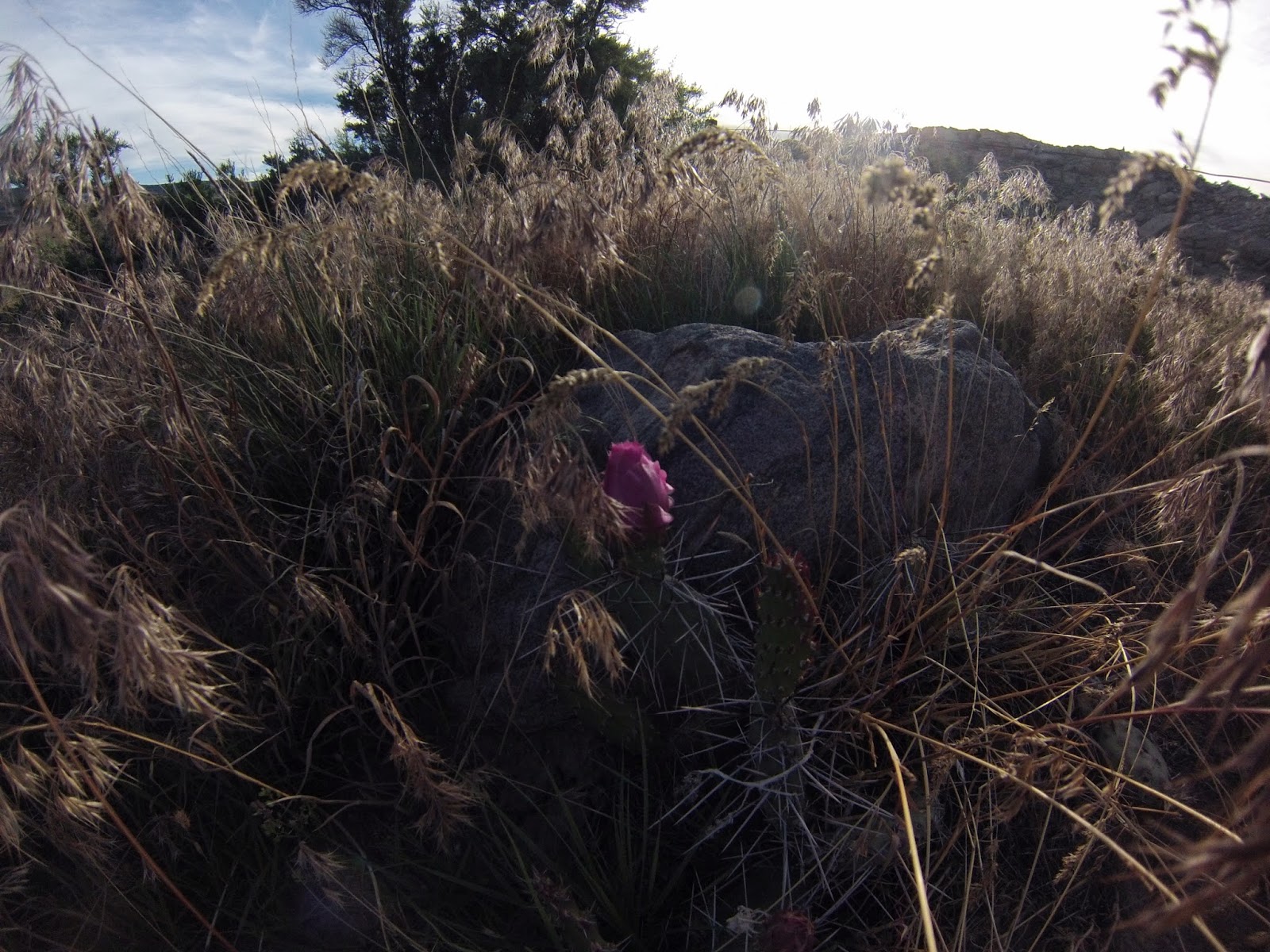 
Uncle Karl hooked me up w/about 6hrs of new music………. Shadow Boy & I have a few miles 2 cover this weekend…… I am so stoked right now…… The trails are so beautiful this time of year….. Flowers are full of colors…… Mother Nature might throw down some lightning bolts……. Cloud cover in the high desert…… On the agenda, Miles & Miles Of Single Track & The Cheese…… Photos will be posted soon….. Happy Running Folks
Posted by The Padre at 10:28 AM No comments: 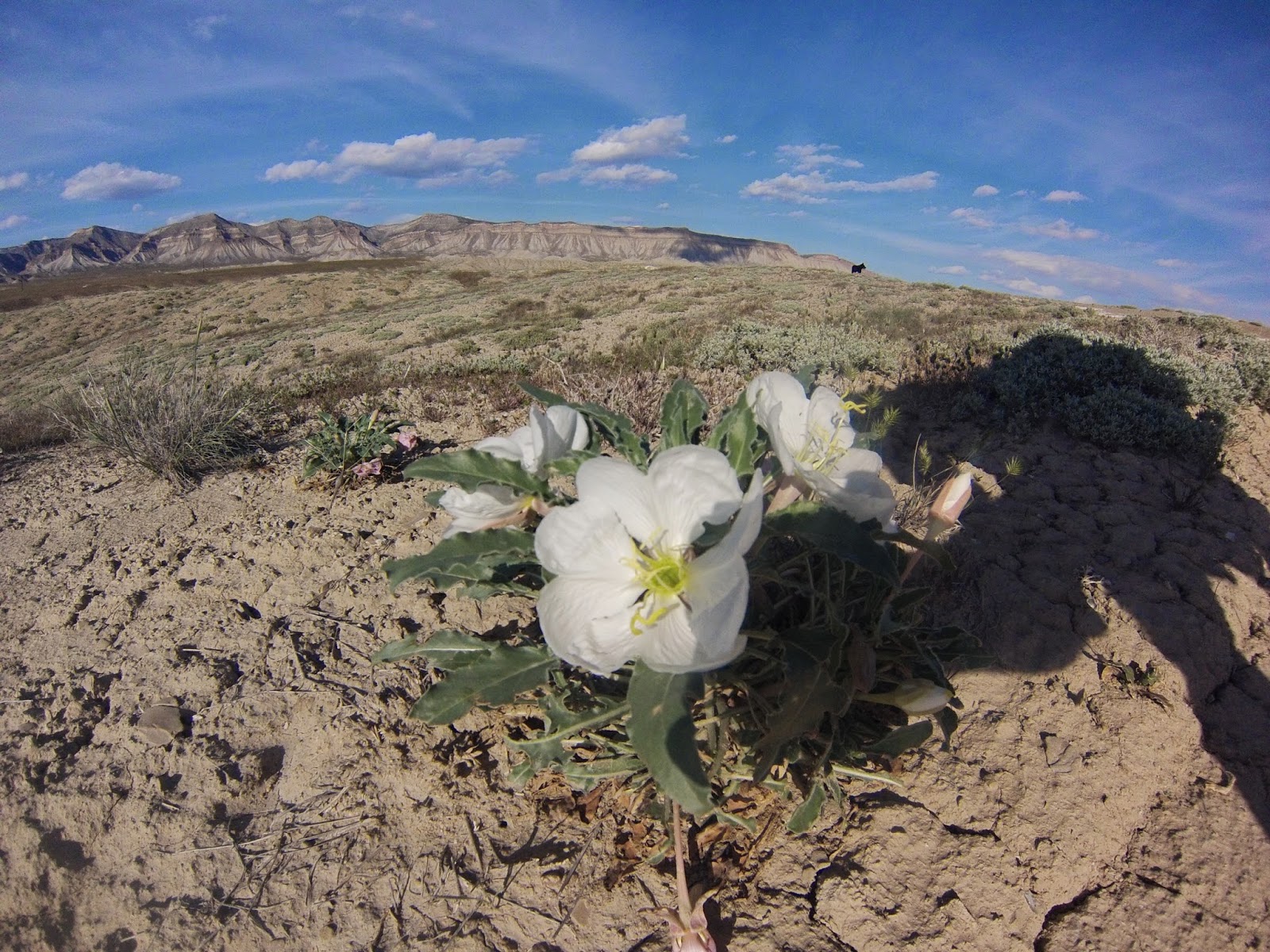 I have really enjoyed the photos from around the Western States of the US of blooming desert flowers. Started low on the globe w/AZ folks sharing. Then UT mades a statement or two. Now, sharing a very small representation from the Grand Valley. 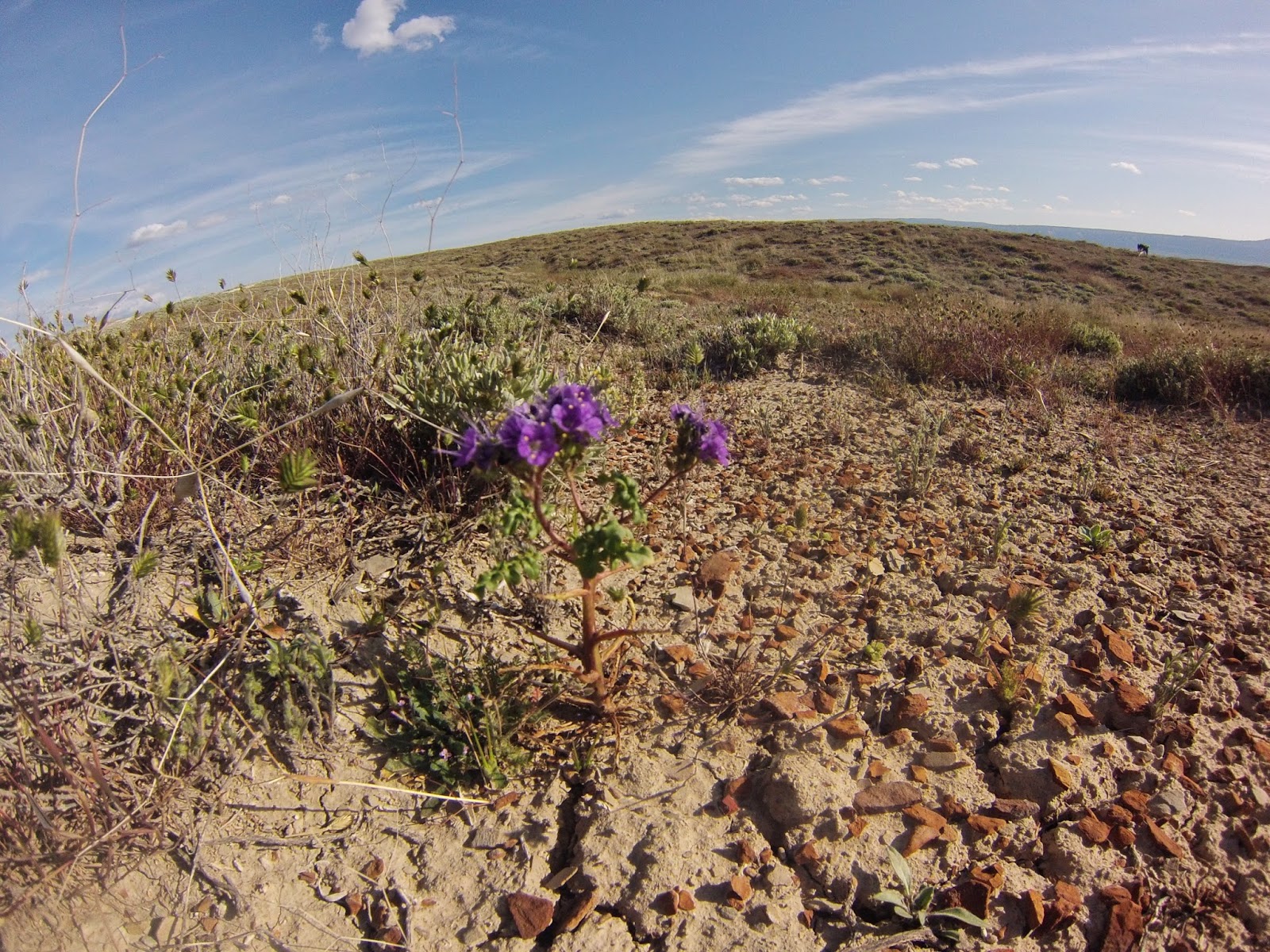 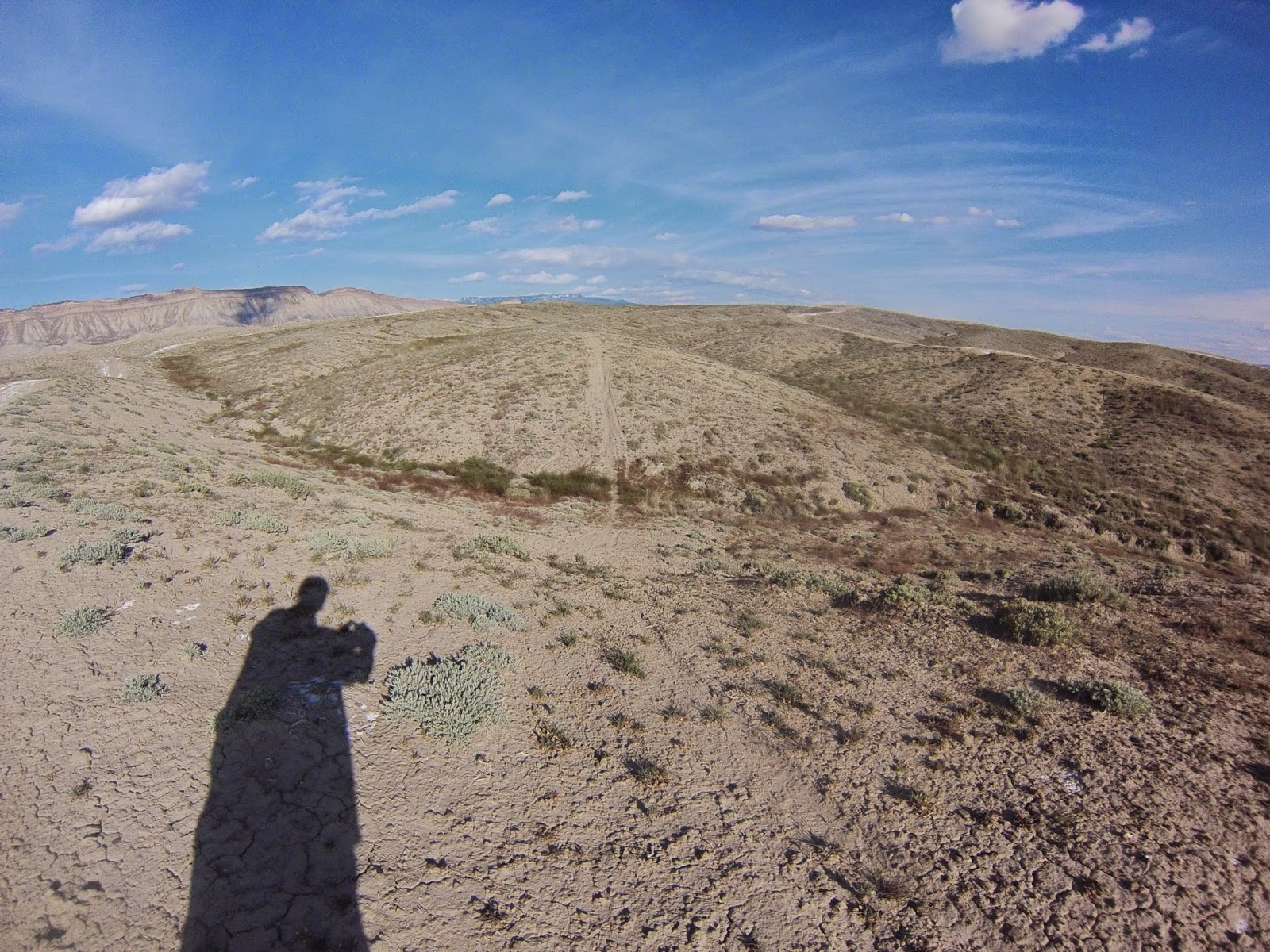 What a sunrise 2 start the day, but my day starts w/belly rubs on Shadow Boy. Every morning goings like this & I give him more reassurance of love & happiness. Then, it was a stretching morning w/Mr Sun. 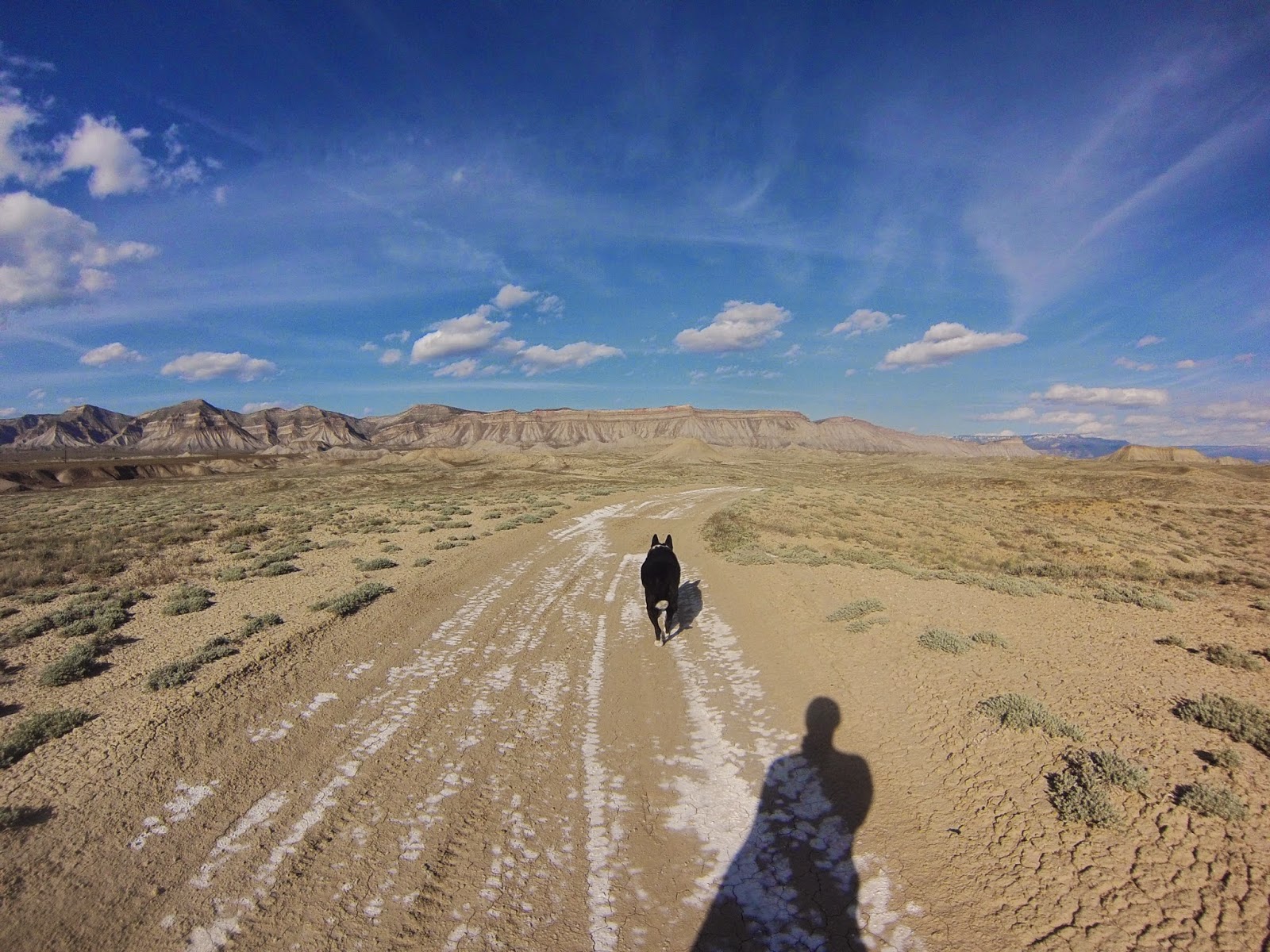 My day was so beautiful. I meet up w/a wonderful happily married couple, rode my commuter downtown under Colorado Bluebird Skies, & took the Boy Dog out 27 1/4RD for a trail run. 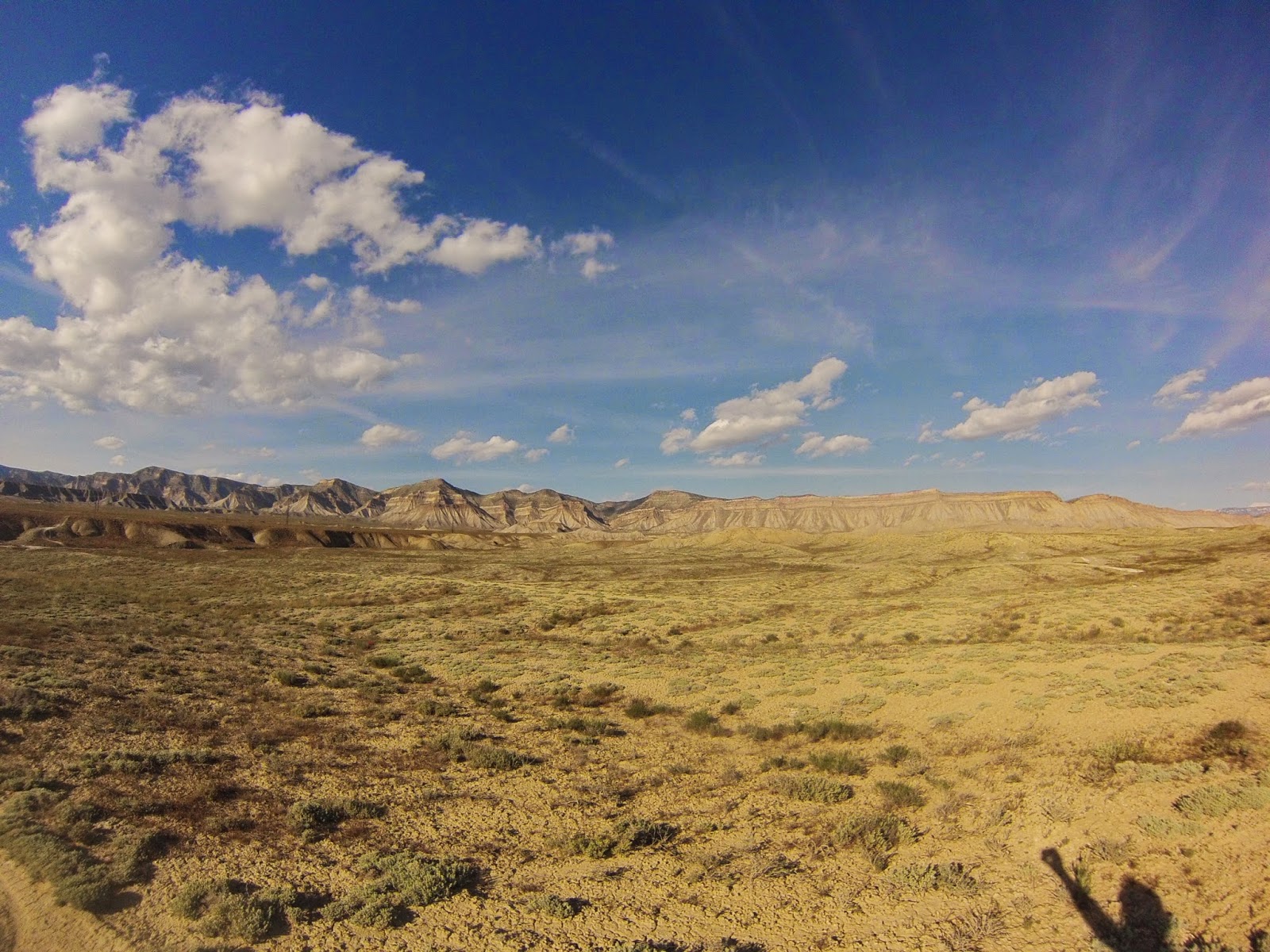 This was my 1st run in weeks. Many of you know that a month ago, breathing was almost unbearable let alone running, biking, swimming,etc. Todays run was more 4 the Boy Dog anyway. I opened up w/a relaxed walk but at a solid pace. Once I was on a flat ridge, I checked my posture over & over while I fell forward. What do you know, I am running… 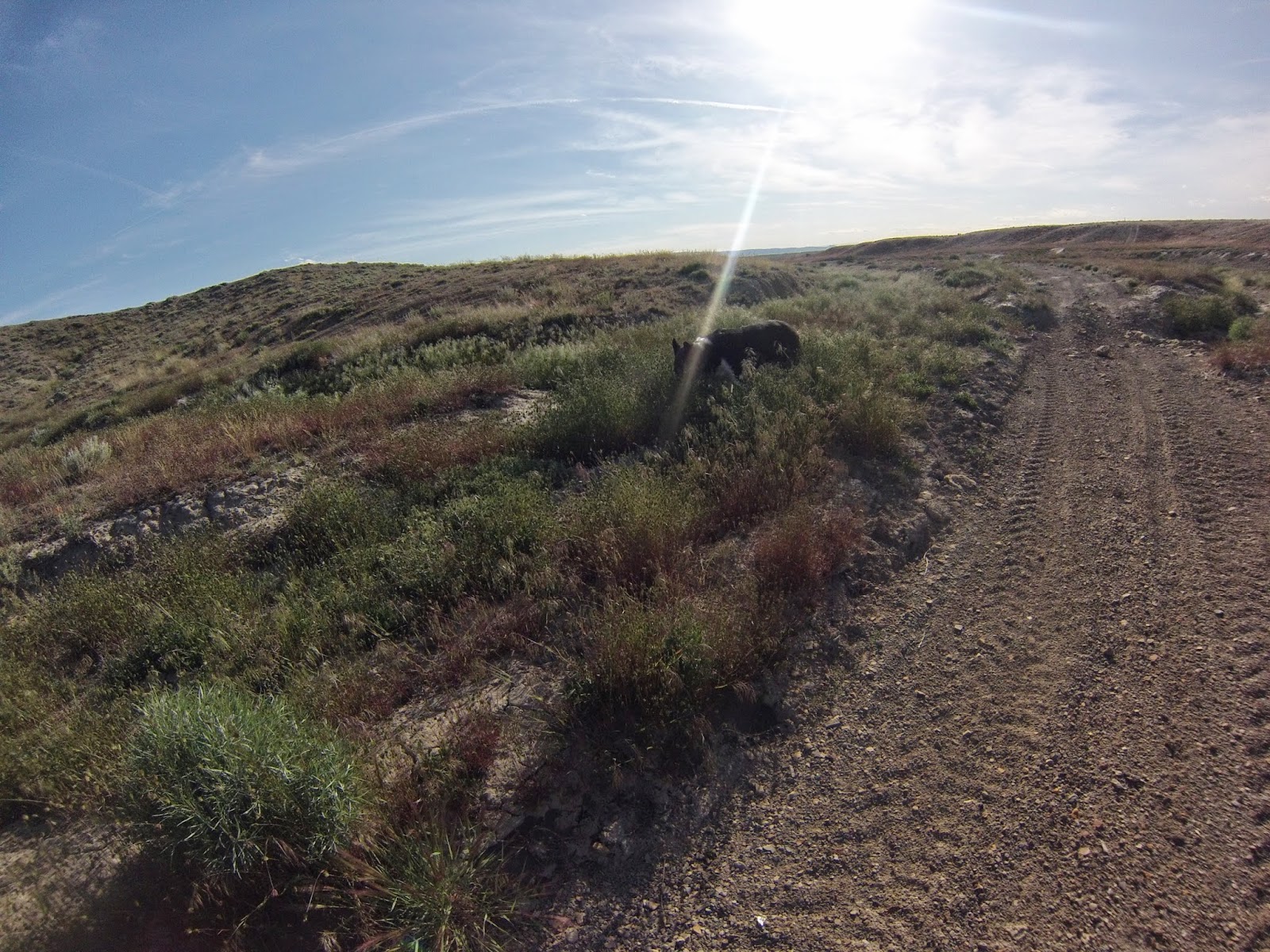 …. And so pleased to be running, releasing all the junk in my mind, opening up, & leading w/my heart. The ground was so soft & my body was surprisingly loose w/each stride….. 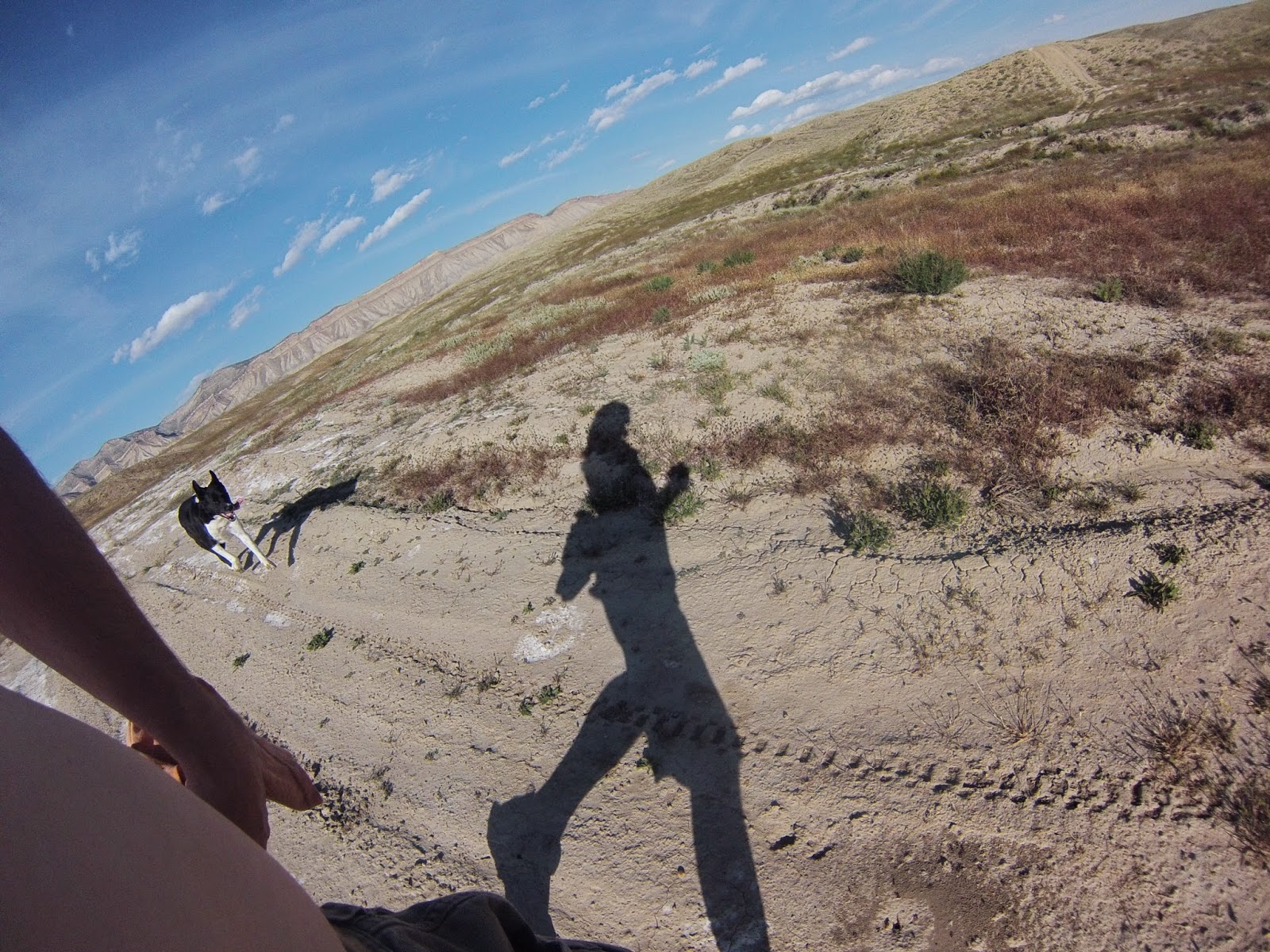 ……….very pleased w/how I felt after a month off. My hips were open & the ROM was there. Shoulders were creeping up But it was easily corrected. Now, I wasn't running like my hair was on fire. Easily could have held a conversation & sometimes I was talking to Shadow Boy. We both like that….. 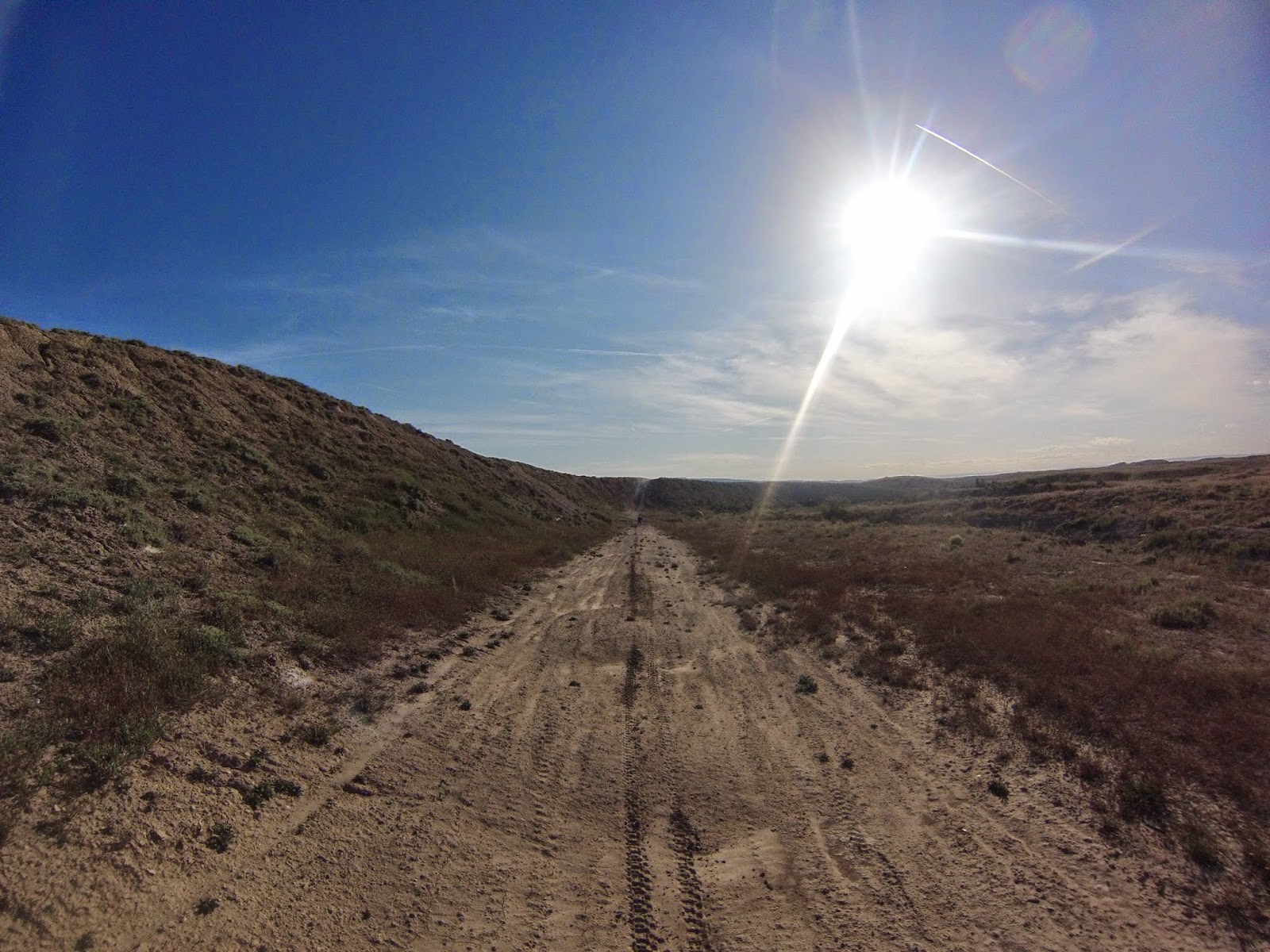 ………...I really like this hill & kinda miss it. I was running up this & looping back to this spot for my hill repeat workouts last March. Plus, the Boy Dog saw a rabbit about 3 years ago in the ditch off to the right & he checks this area constantly. I have been w/him on a ridge up and over this one & I will see it roll around in his head that THIS IS THE SPOT & away he goes. Funny Like That He Is

I really didn't feel all that winded after this outing. While Shadow cooled down some, I stretched my legs pretty well. Rolled both ankles & did 2 sets each of ABC's. Him & I drank more water & walked around this little area. He kept a close eye on me as he wasn't going to get left. Once we were home, I form rolled my legs, we ate well, more water, & now its shower & bedtime for Bonzo. I will catch the Full Moon before I drift off……. 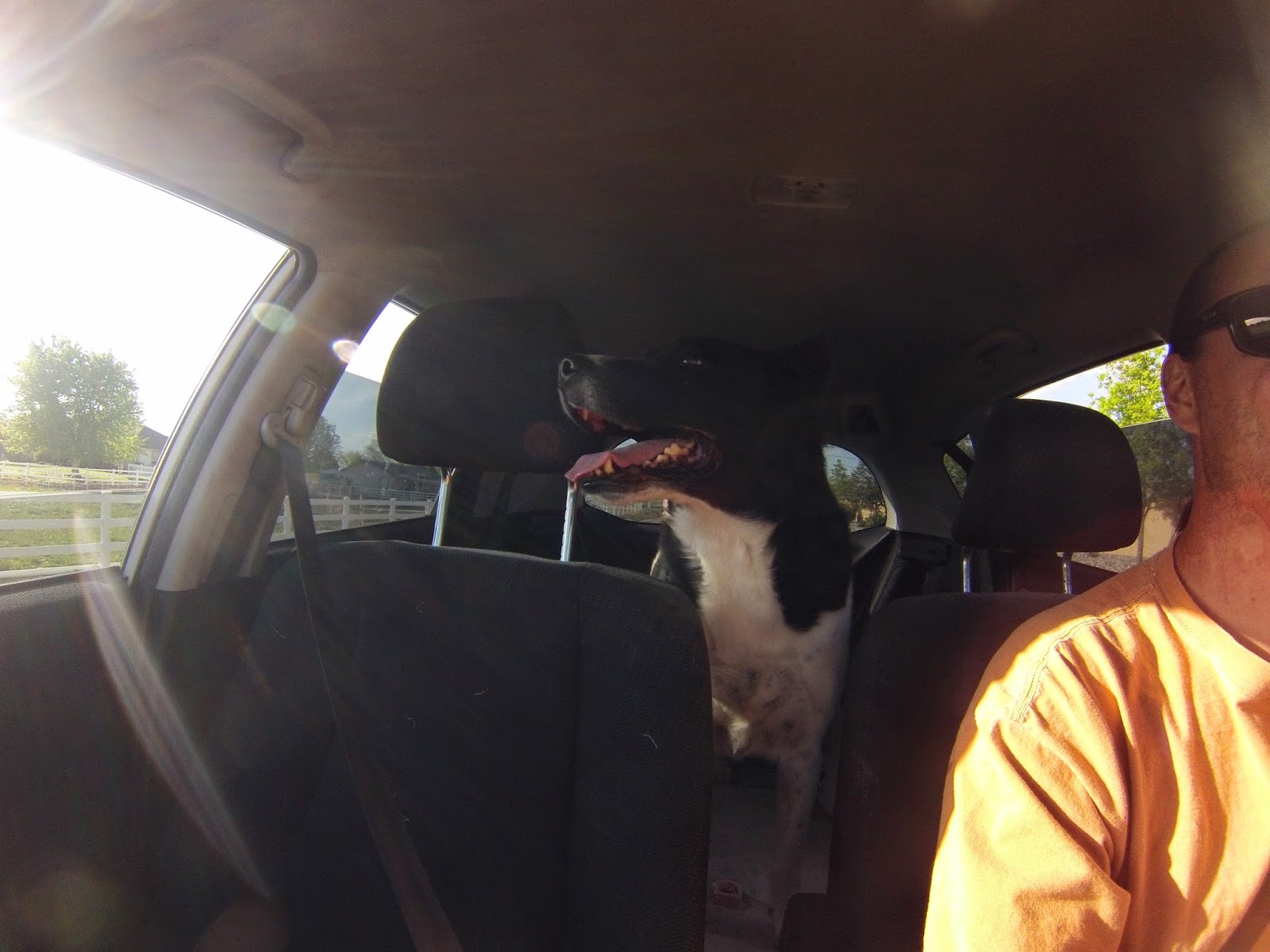 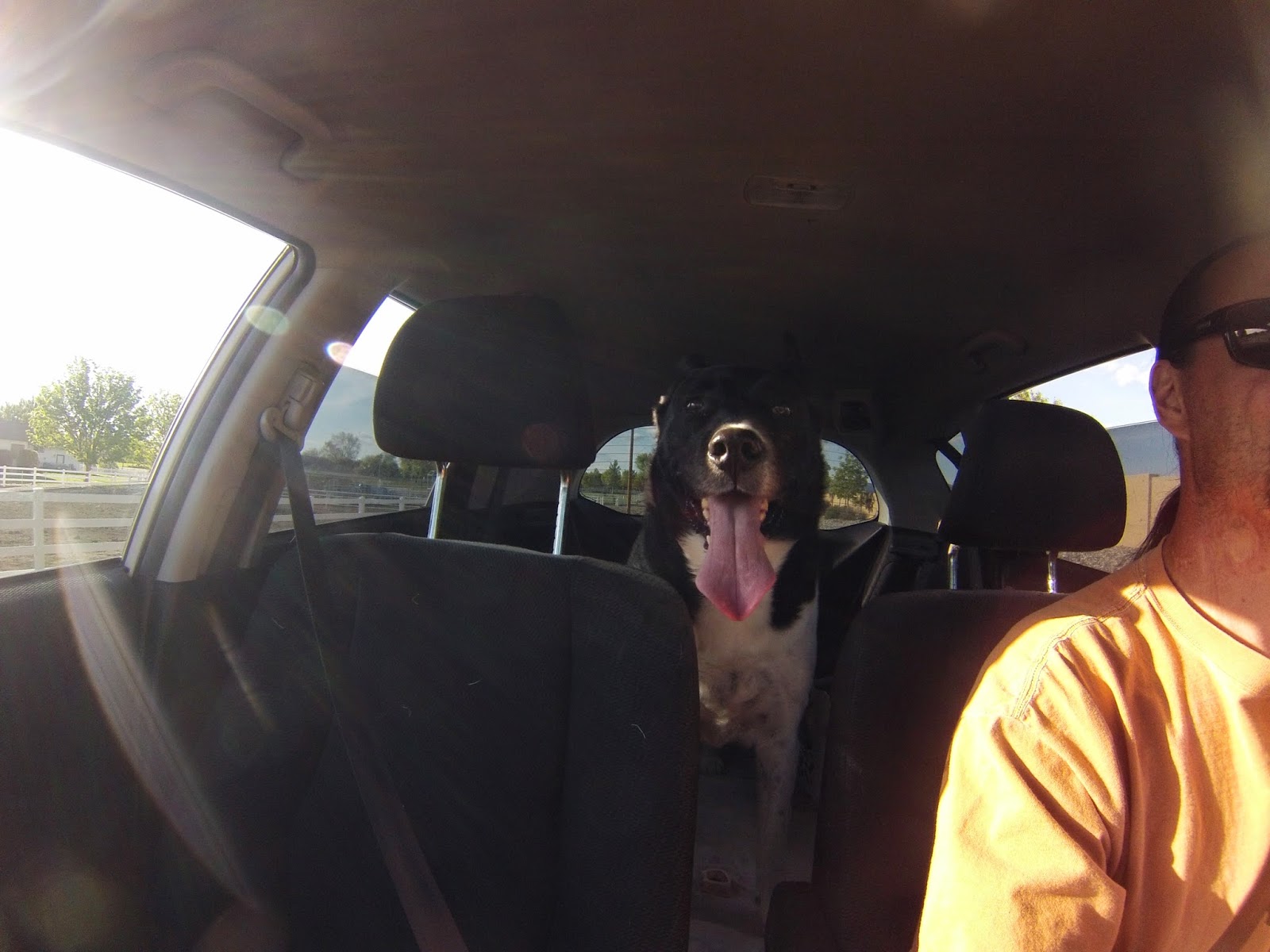 These last two photos are from a 2 second time lapse that I am working on. I rolled out of the desert way slow & hand held the GoPro. The video is pretty funny but needs music. Should be posting it soon.

My weekend started on Thursday, didn't know it at the time, but it did. Shadow Boy & I went down 2 Edgewater Brewery & started early. Walking that is. The brewery was packed & they had a band outside & it was crazy loud. Shadow doesn't dig loud sounds. Him & I took off early before the group was meeting, updates, etc.

After walking the 5K at a pretty good clip, I sat in w/Robin & Tim, that lead 2 a job offer helping set up downtown 4 the Music & Art Fest. Thats right up my alley!! I have been locating spots 4 vendors 4 years. Got the customer service down.

Friday was an early start, chalk in hand, measuring out 10 X 10, 10 X 20, & a few 10 X 15. Some have power, some on the north side, & Mr Sun felt Gr8 when it came out. Saturday was another early start w/the 1st running of the Beat Beethoven 5K. Awesome idea!!! I think the song was the 5th movement but I know it was 30min long. A funny young P.E. teacher dressed as Beethoven & paced the group 2 finish exactly at the end of the song. If you beat Beethoven, they gave you a surprise. Plus, it was the 1st event!!! I helped time, saw more friendly faces, & enjoyed the atmosphere.

May 10th was National Train Day, so we headed down 2 the train depot, letting the cookie express our visions. Apparently, GJ is pretty low key about this event, unlike The Golden Spike in other regions of America. The poster read that at 3:45pm there would be old cars on the track & a raffle of sorts. Well, The Dude & I were the only ones there 4 it. SH&T FIRE!!! 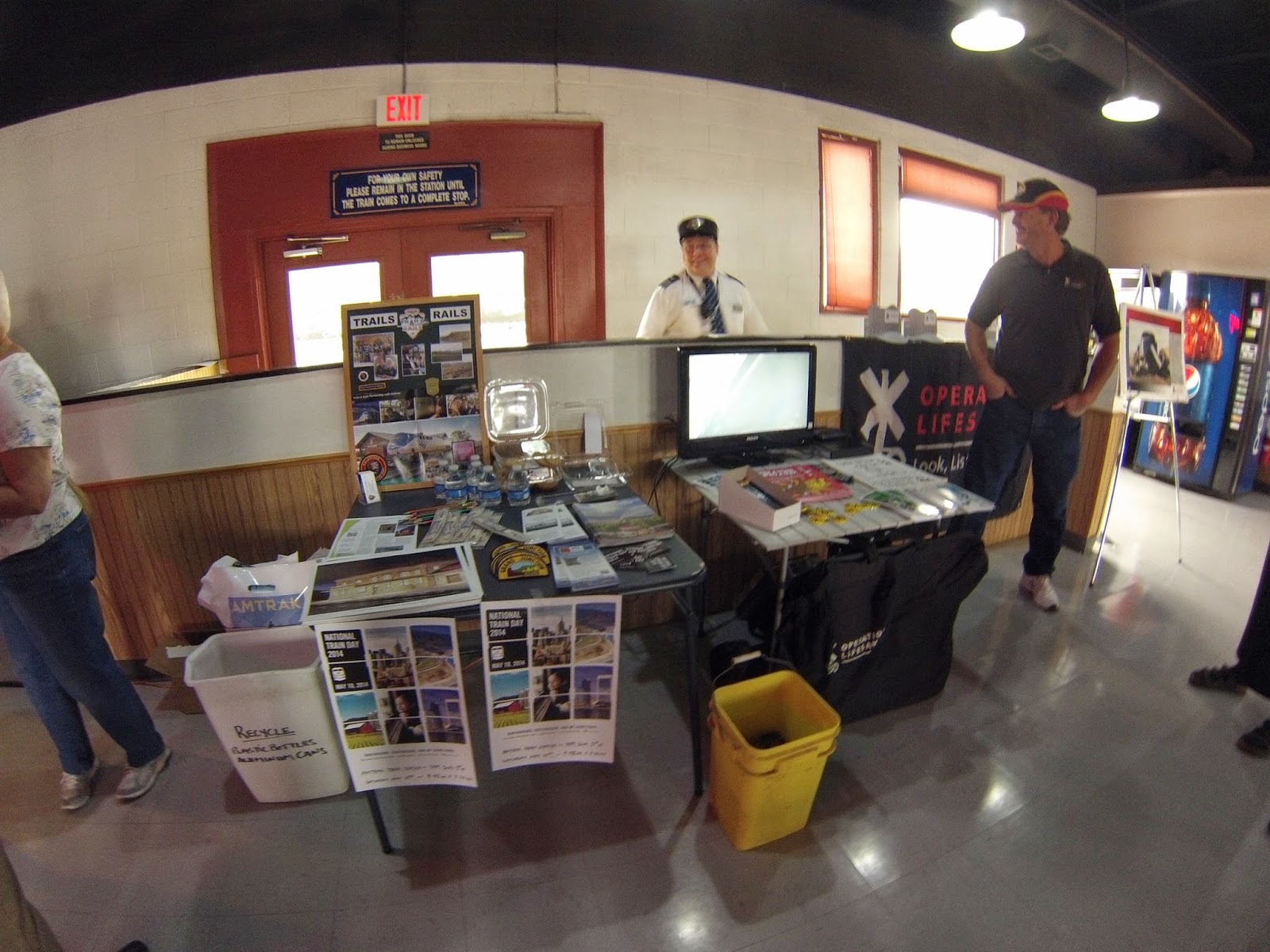 The photo above is a display table of free goodies & the gent on the right is volunteering his time 2 educate SAFTEY 3rd. He told me that he has been an engineer 4 12yrs. Score!! 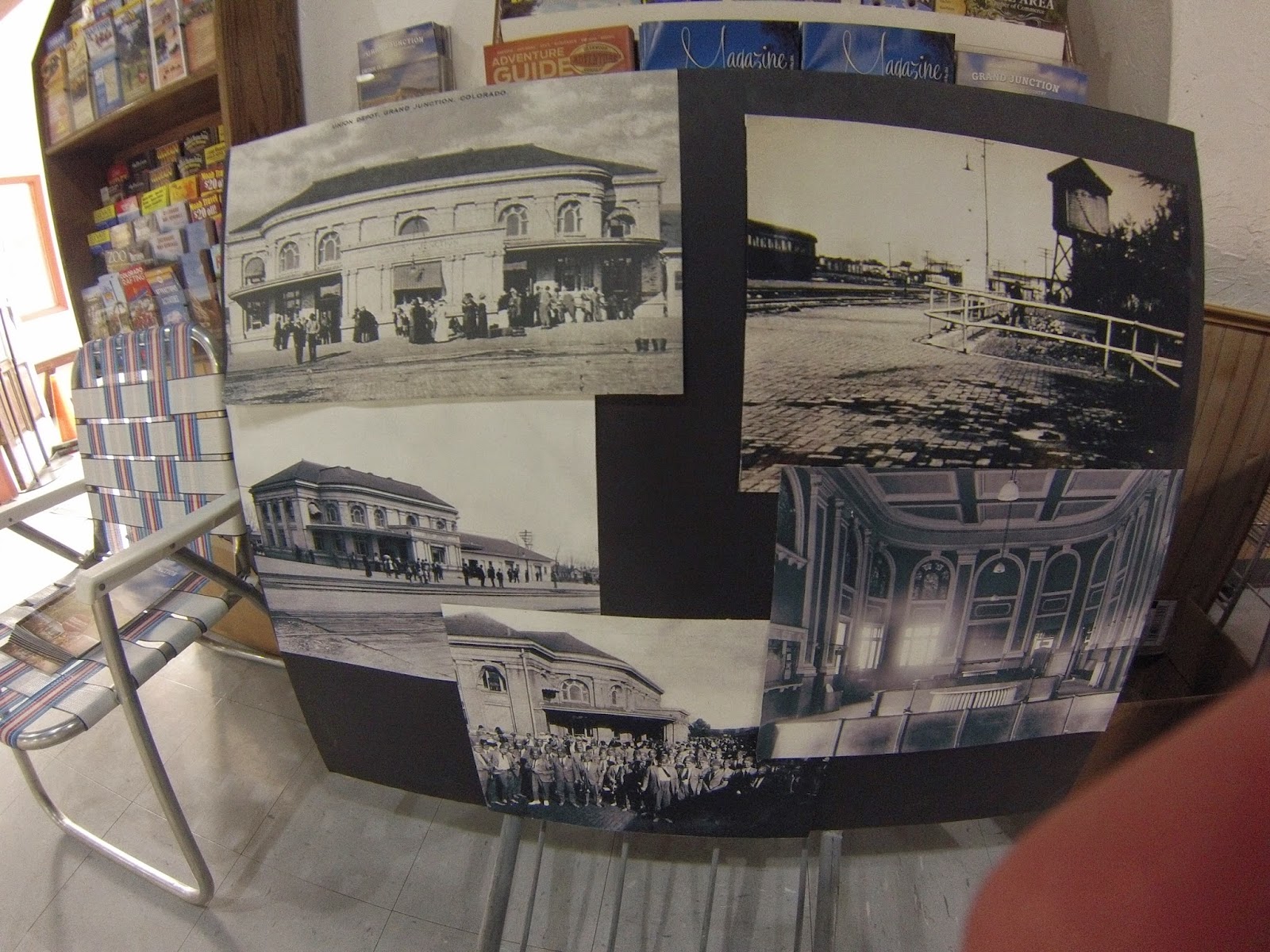 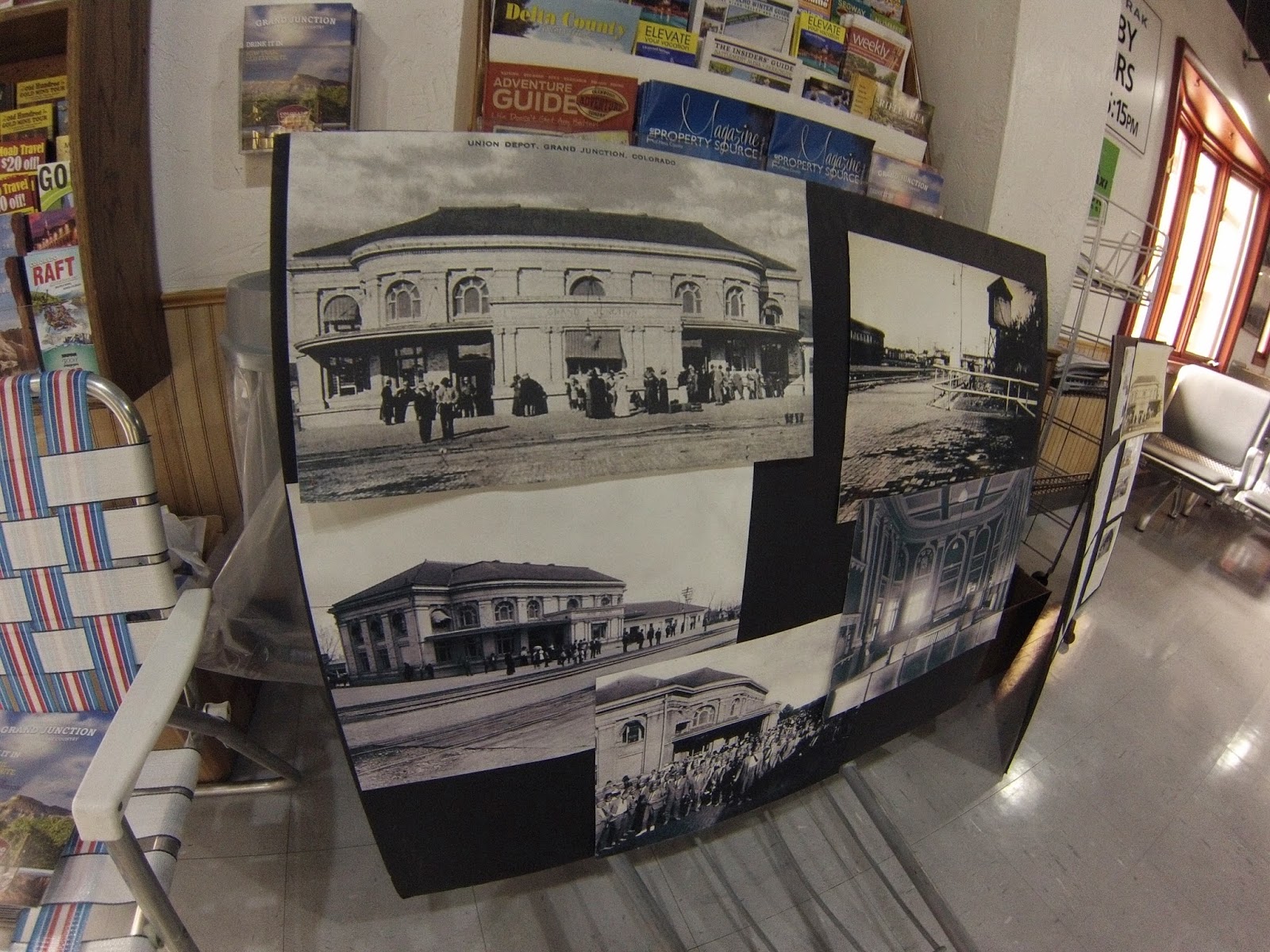 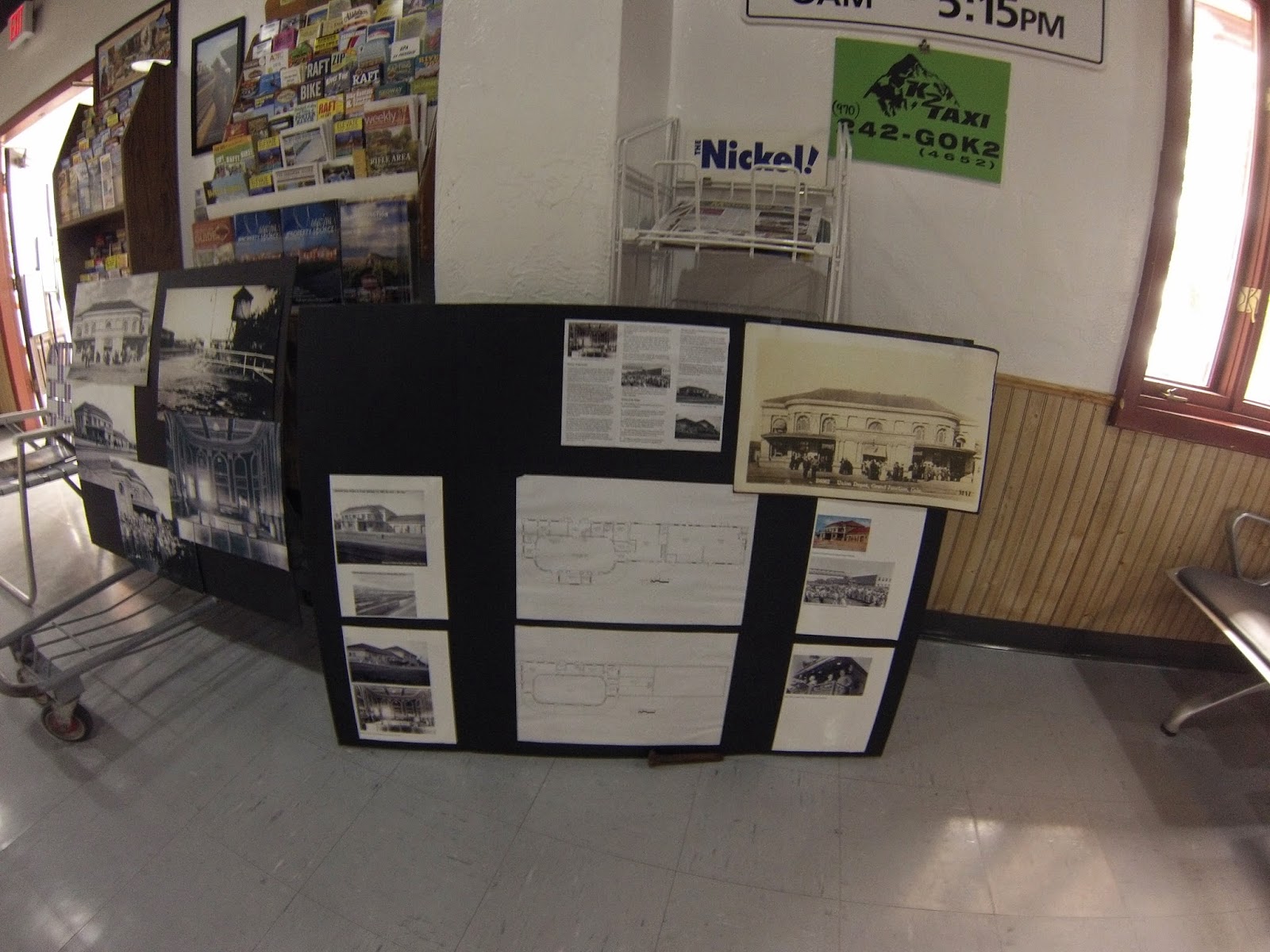 Some photos of the GJ Station that was build in 1906. At this time, I became quite disappointed by the representation by GJ's finest. I took myself outside & set up a time lapse. That also sucked!!! Hopefully in 2015, I will lend a hand 4 the event, bring a little life back, maybe, maybe something bigger. 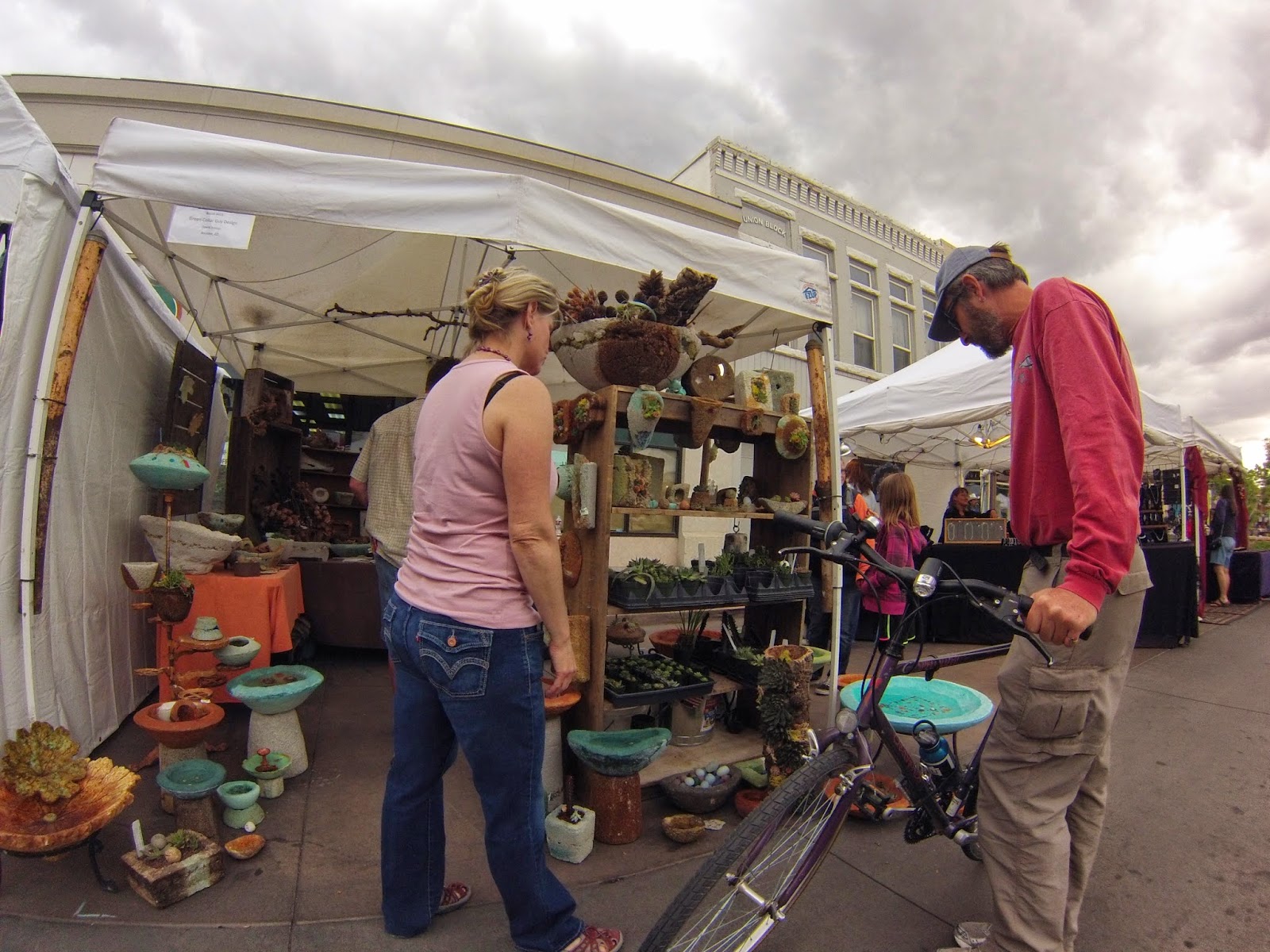 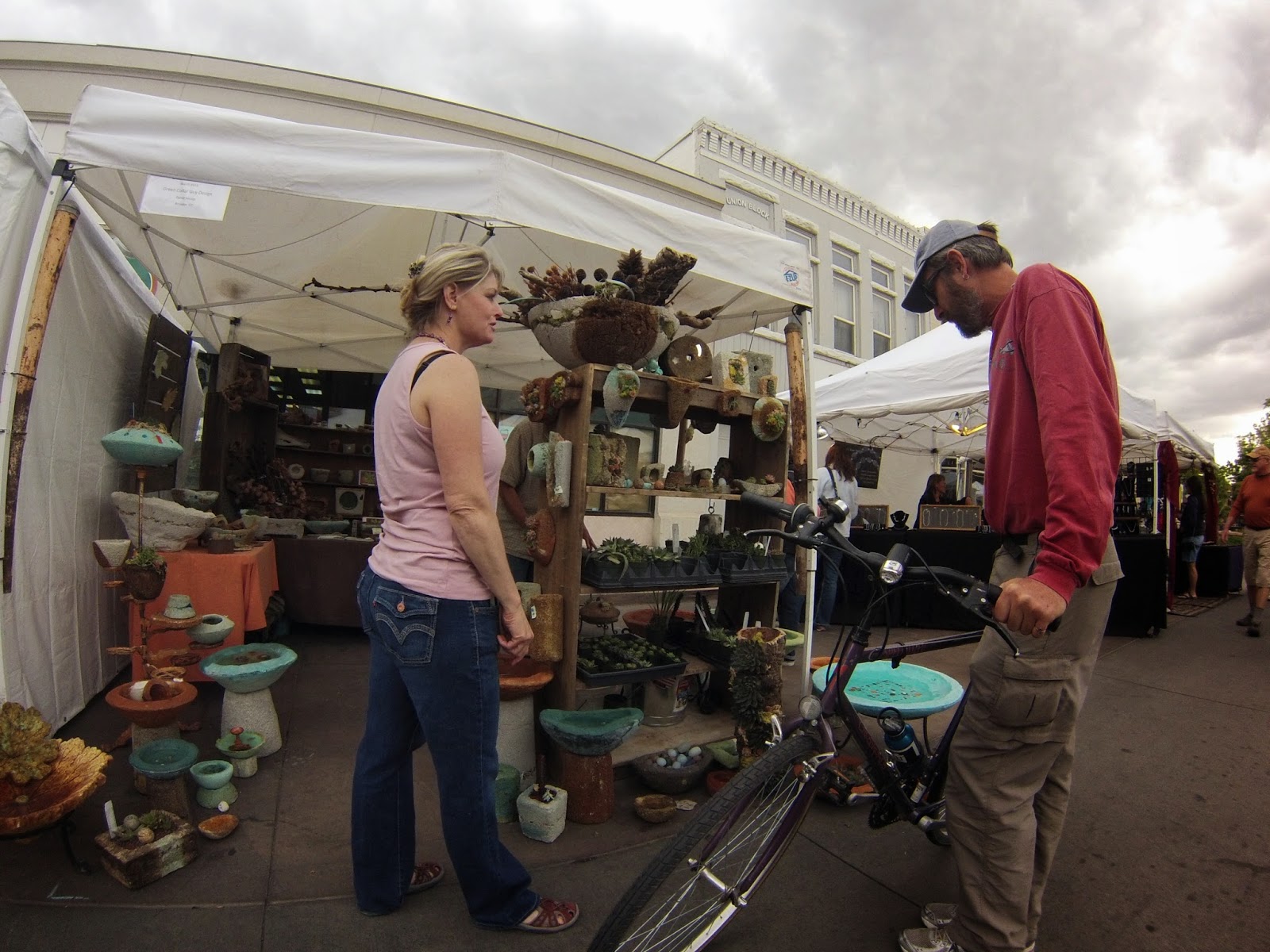 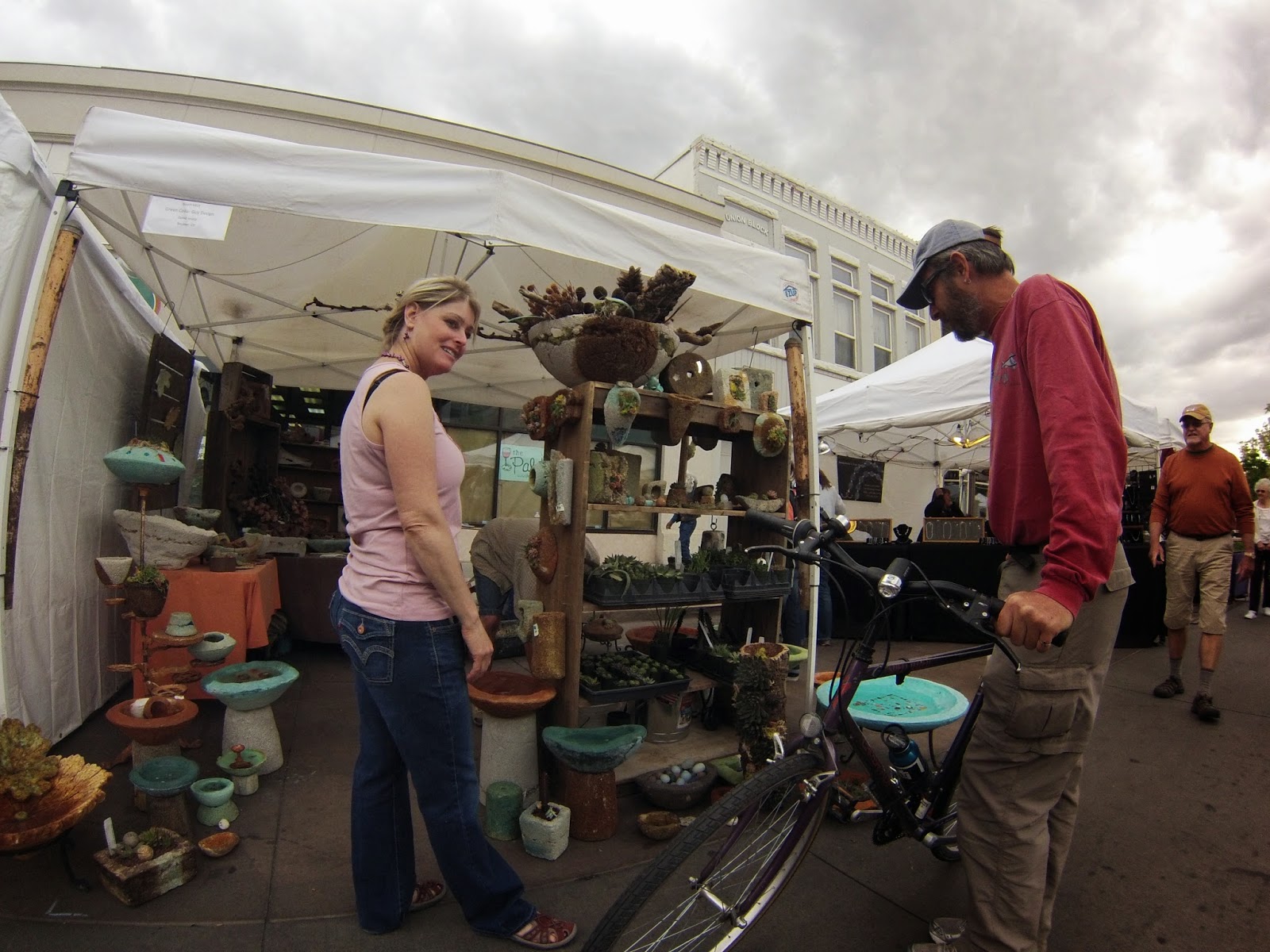 We adventured on 2wards Main St were the 2nd day of Music & Jazz was in full swing. This lady took sweets on The Dude. I was giggling inside & snapped a shot. Forgot it was still on time lapse setting from the trains. Cracked me up when I saw this series & now you can see it as well. 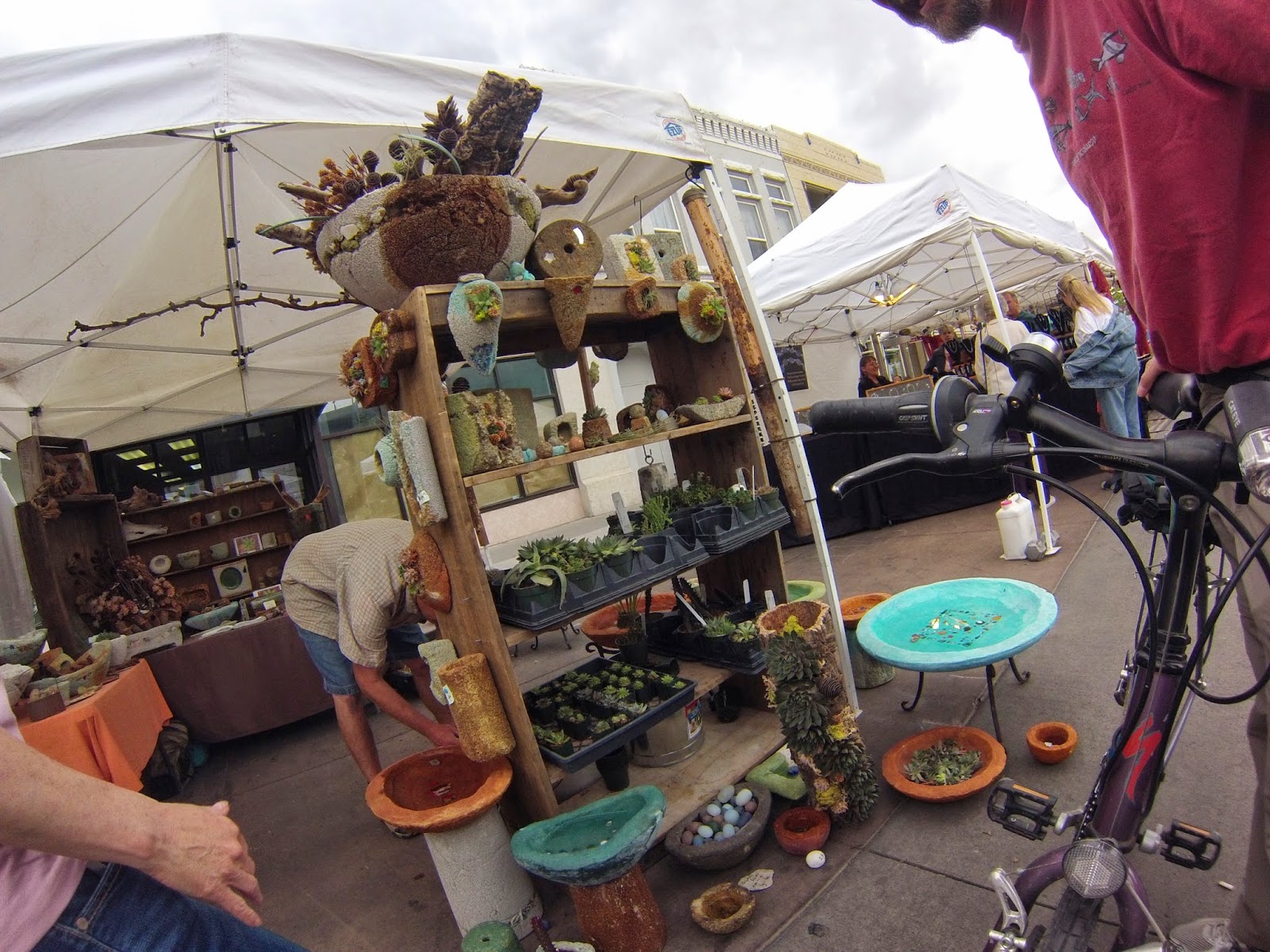 Pretty cool succulents 4 sure. Adding water was a nice touch. 8 Bucks a plant was a drag. 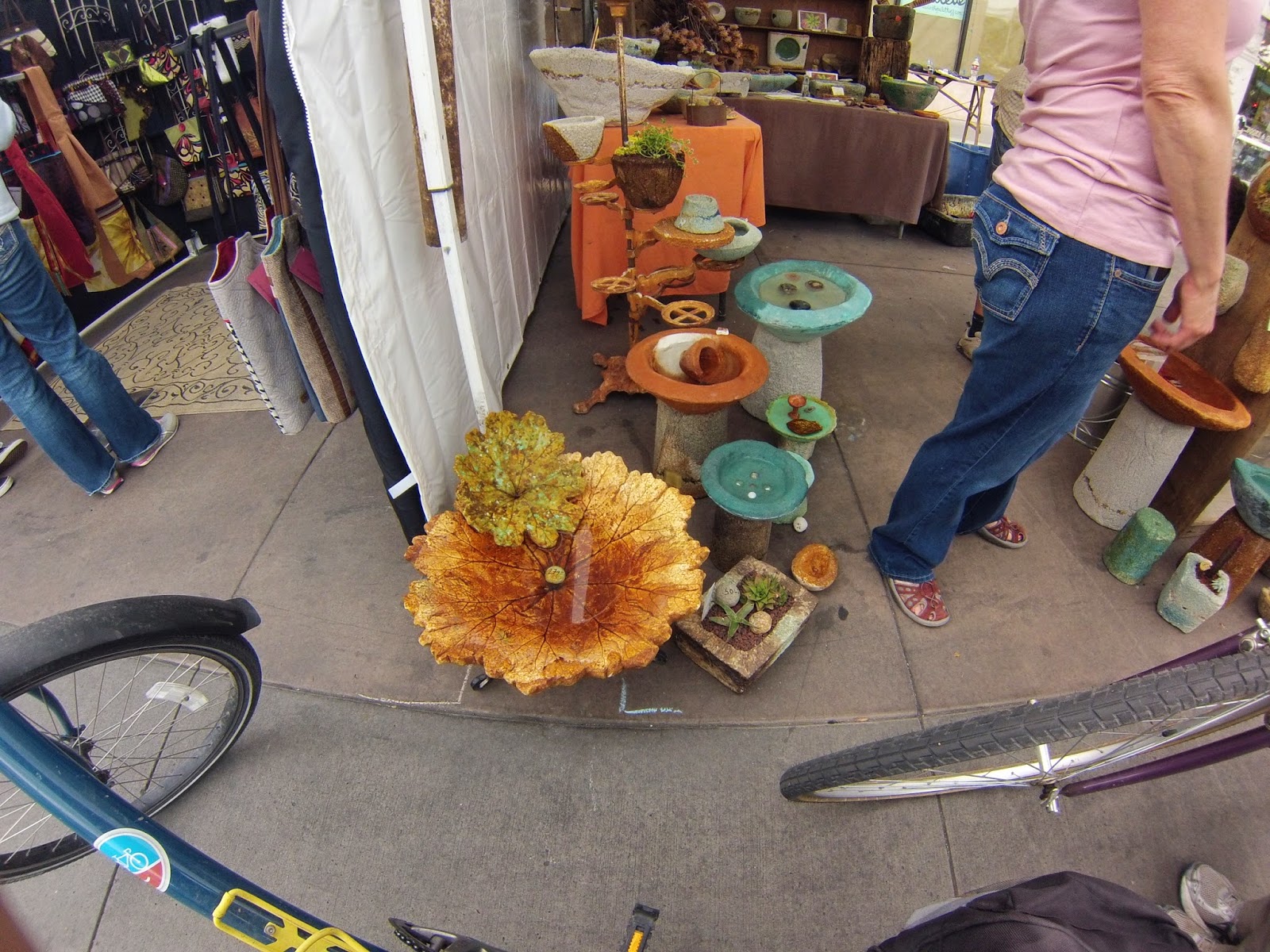 I really enjoy walking Art festivals. Who doesn't love people watching??? The vendors have become so damn creative. Even the simple booth's have attractive hobbies that look so easy 2 duplicate, but we don't. Also, all the different stages were unique in every way. Verities of music, style, & stage performance. I like it all. Oh, the sunset was perfect 4 an Art & Music Fest…... 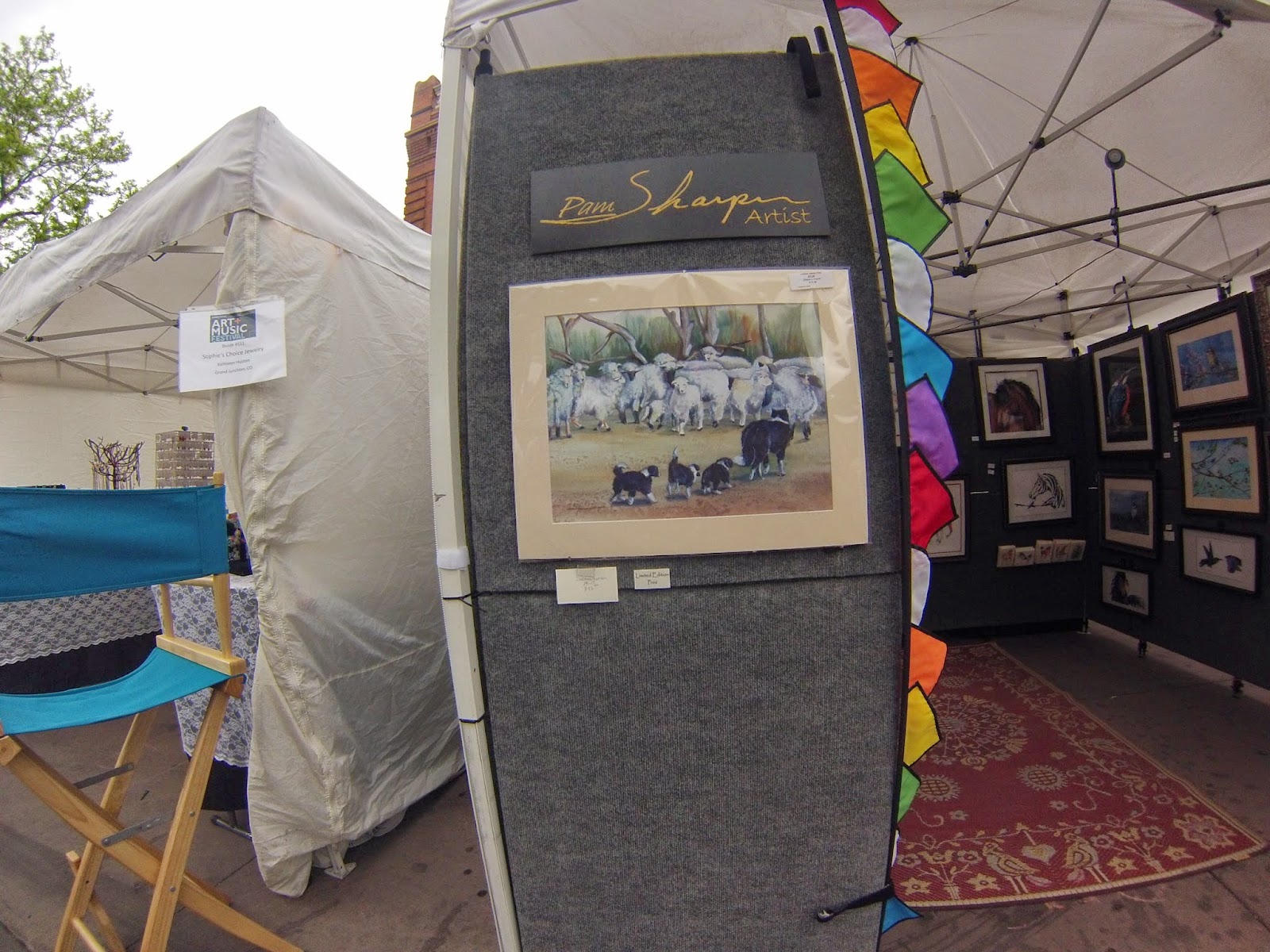 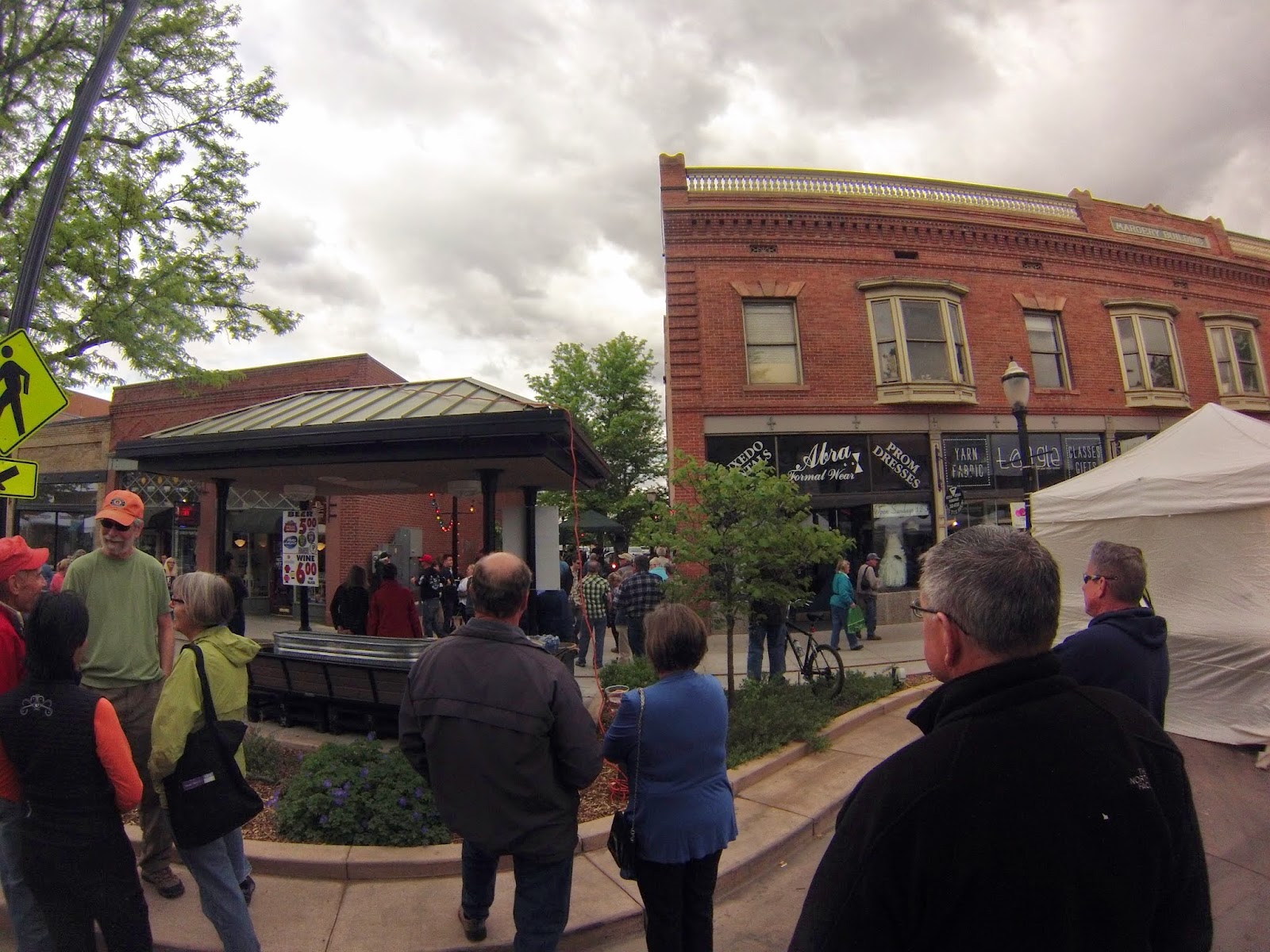 Side stage band that was really good. They didn't over play their location. A good size crowd gathered & I spoke w/a few old faces from early 2000. Note: Check Out The Clouds. 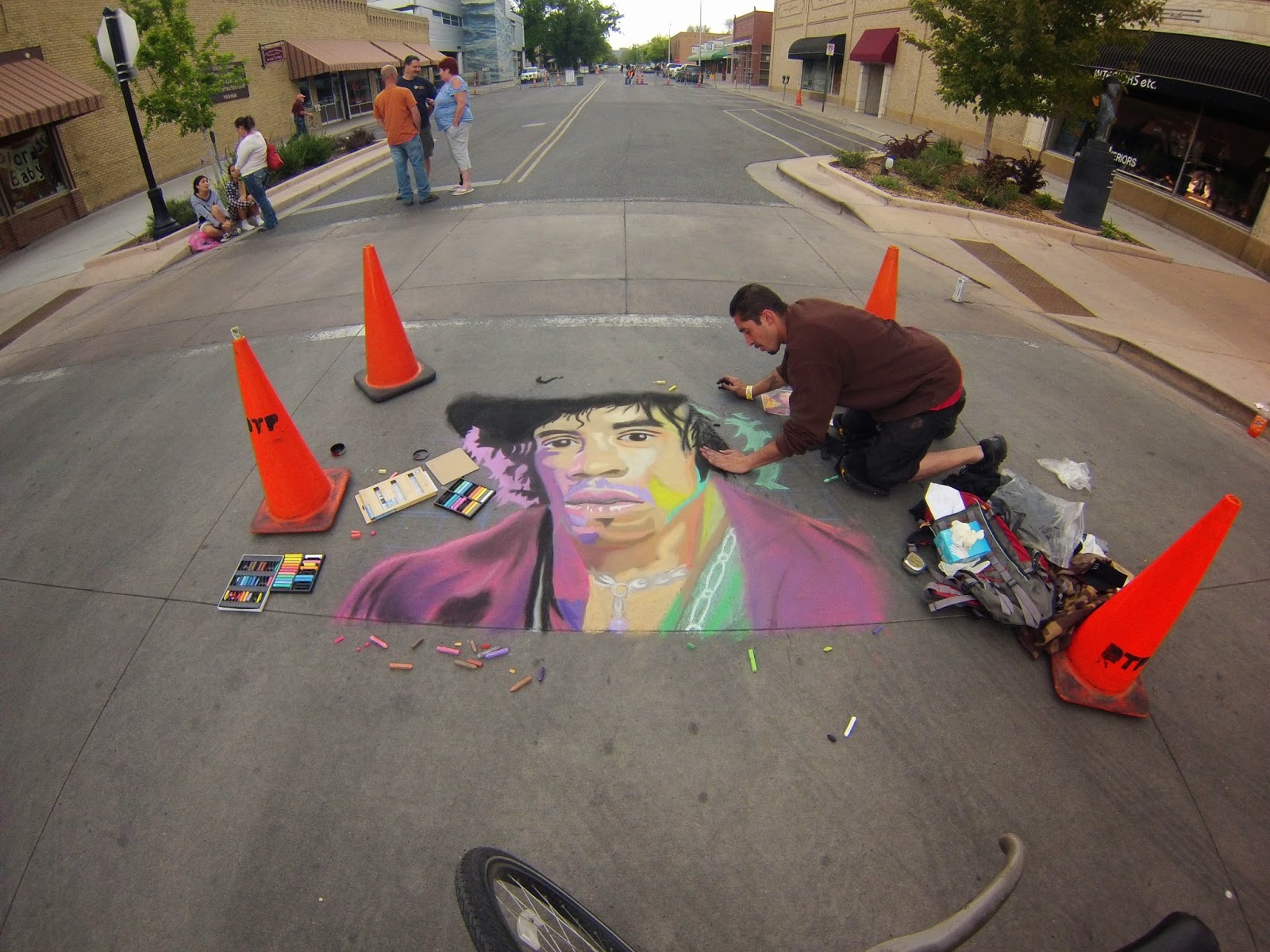 This guy was focused. He wasn't doing it 4 the money. Wish I could have done a time lapse on this work of art. 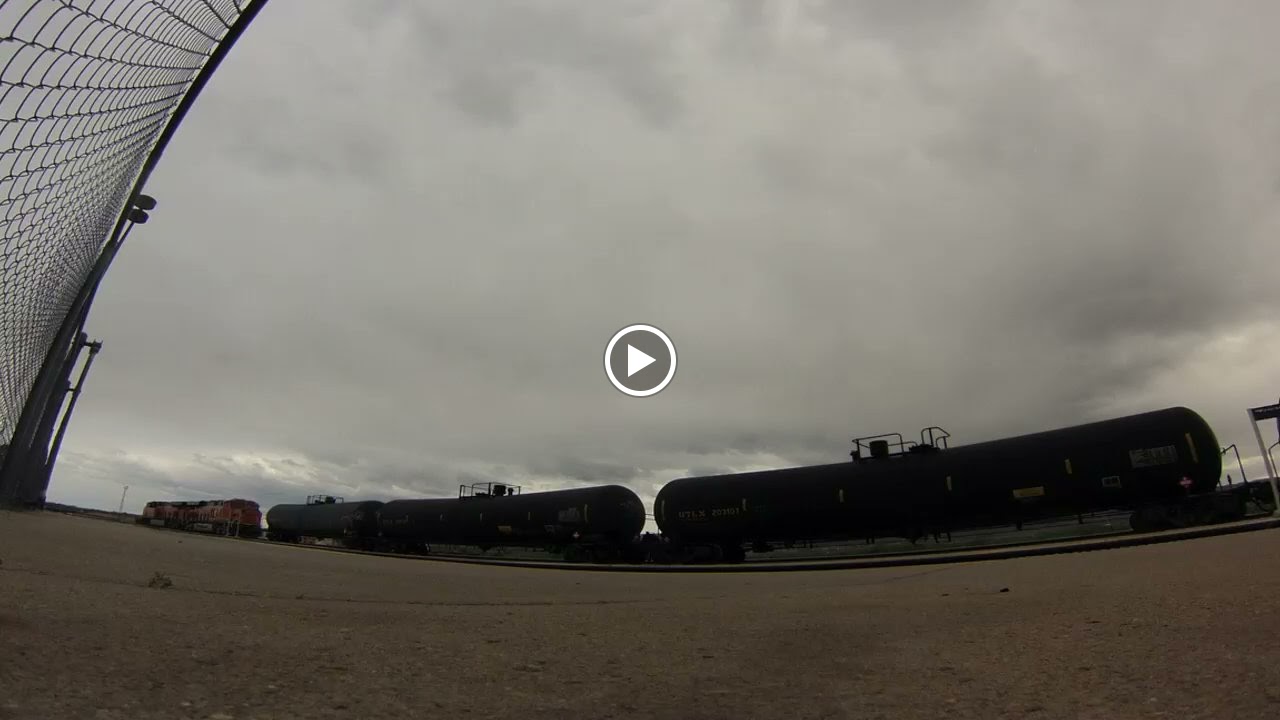 Super cool weekend. Talked w/the right people at the right time. Big news is just around the corner.
Posted by The Padre at 9:25 PM No comments: