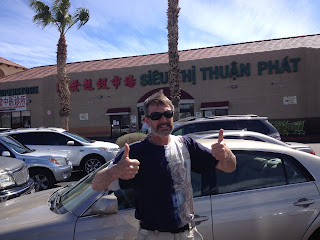 The Dude And I Made Our Annual Migration Down To Vegas For Opening Weekend Of March Madness. We figured that this was his 17th trip, so we might know what we are doing by know. First Stop, Chinatown!! The tropical fruits are dirt cheap, we stock up on hard to find items, but you have to read all the ingredients to avoid MSG's. 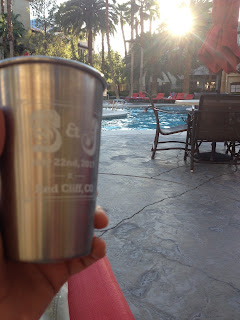 Next Stop, the pool at the Tuscany Suites. This is our 5th year at the Tuscany because every room has a kitchen, dinning area, lounge area, and two queen beds. We drove down with two ice chests full of prep meals for the crockpot so the kitchen is a must. 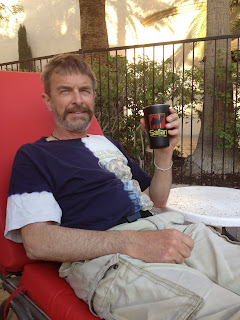 And the Tuscany's Sports Book never has anyone in line and happily pays out often. Vegas now offers Buy In Games which is ideal. For instance, the betting line opens at say 15 1/2. The favored team hits their first two 3 pointers and that line now shifts to 20 1/2. So you can buy in on the under dog at 20 1/2 spread rather than the original 15 1/2 spread. The under dog team claws its way back into the game loses by 16. That means that the favored team covered the original spread but I win the buy in spread!! The Buy In addition flipping takes the cake. 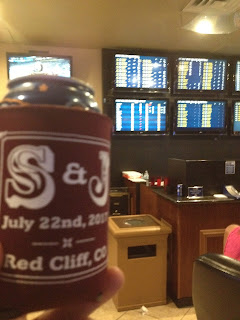 We tritty trotted on over to Baileys and watched the afternoon games on Day 2 and scored Dr Millers seats when they went back up to the room. Score!!! An associate of Dr Miller's told us to keep their seat warm while they are gone. All of a sudden, I really like Baileys Sports Book. 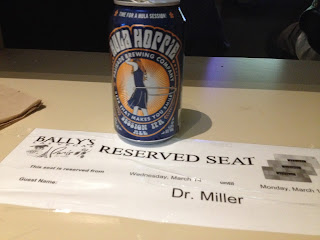 The evening of Day 2 was spent roaming around mid strip with a backpack full of spirits. The casinos were packed with Spring Breakers and Basketball Enthusiast. Extremely Enjoyable!! We ducked into the Flamingo and hung out with the African Penguins, took snap shots from around the Bellagio, and sat near the Thailand's Buddha Temple. What doesn't Vegas offer?? 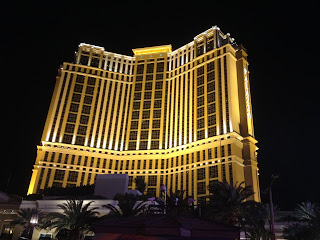 We shifted on up to Fremont Street for St Patties Day and checked into the Las Vegas Grand for our third adventure there. It just happened to be the cheaper of the rooms on Fremont. The pool is located on the 3rd floor which is actually the 5th floor. Way Cool 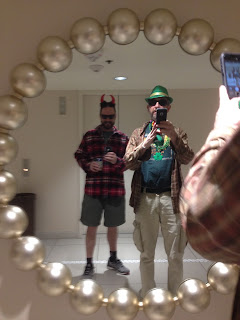 My first outfit was the Red Devil and what a hit. I totally stood out in the sea of green & I was in a number of photos with that outfit. It was kinda funny how women would act super hesitant/polite and ask/say," Love your horns. My I have a photo with you??" I Love So That!! 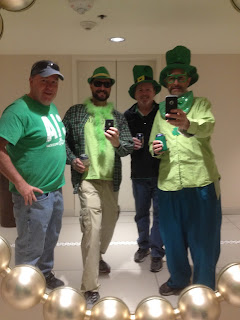 The Kenny Brothers made their way up from Henderson and the younger brother immediately joined in and tried out a few of our accessories. You see, the deal is, every time we walk back to the room for a new cocktail, costumes are changed. 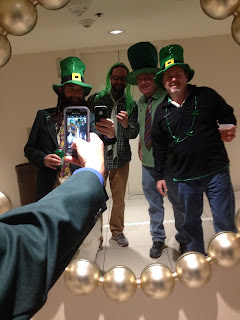 Having a new disguises frees you up to roam with a new projection and it makes for easy photo opportunities. Its a classic to see a group dressed up at 3pm and full of piss and vinegar, you can see the dehydration kicking in for that group by 5pm, and then the look of a complete shithouse by 7pm and you just know that half the group won't make it till 10pm. Changing outfits keeps it fresh and helps to avoid rookie status. 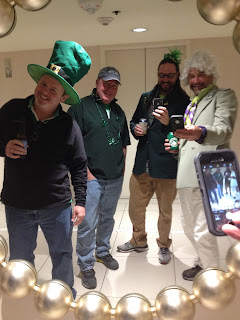 Speaking of veteran moves, I went with layers because of the breeze that night and I wore comfortable shoes. I figured that there were so many people milling about that I could pass on all my dress shoes and stay comfortable and warm. Yes, that worked for me & my lower back. 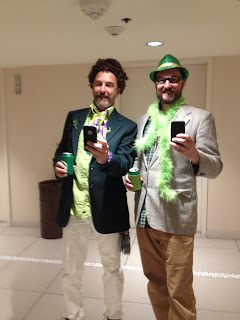 We danced with 5,000 of our closest friends to an amazing 70's/80's cover band to end the night. Overall, there were about 10 different acts on 4 stages throughout the night but the last cover band was awesome and totally worked the crowd. They had both a male & female vocalist for different covers like Billy Idol and Paula Abdul. 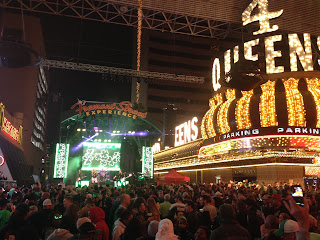 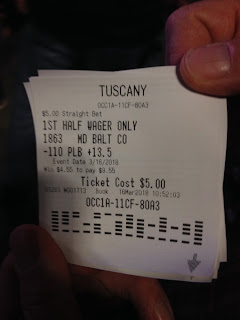 AND WE WERE PART OF HISTORY!!! A 16th seed has NEVER upset a #1 seed and Vegas paid us for being a part of that history. The Books keep the winning tix, otherwise I would put this under glass or frame that sucker. Right?? "they" brought out a flat bed semi trailer right in front of the Brooklyn Bowl with a massive TV for the games. The Dude & I were watching this Va/MDBC with only about a hundred folks until about 7 minutes left in the second half.

The crowd grew, the atmosphere became buzzy, and the crowd size doubled by the 2 minute mark left in the game. Well over 1,000 of us watched history being made during the final seconds. The cheering after every bucket was epic and loud. It wasn't an upset were everyone was dumbfounded by it. In fact, it was pure unity really.

That Is Why We Head To Vegas For Opening Rounds Of March Madness. Its Electrifying To Be Around So Many People With The Same Common Denominator. Its Magical To Be Standing Next To Some Stranger Who Is About To Win A Four Game Parlay.

Thanx Again Vegas!! As The Dude & I Always Say," What Happens In Vegas Is Talked About All Year Long!"

Scored On The Addition & Some String Cheese For Perth

Added weight to all my exercises - focusing on ROM - exaggerate, squeeze, and hold

Surfing The Waves Of Chaos

I used the old iPhone4 and An Old Dinosaur GoPro3 Silver 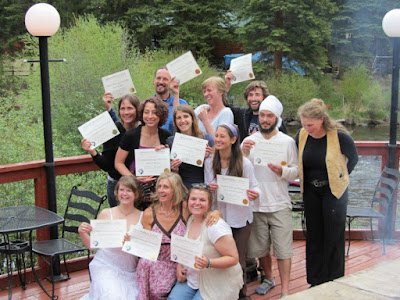 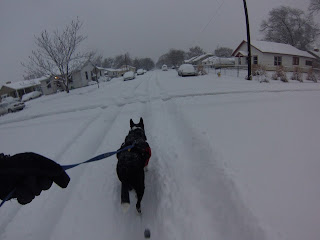 I hit the gym today, but I just drove away since I don't have car insurance .... HA 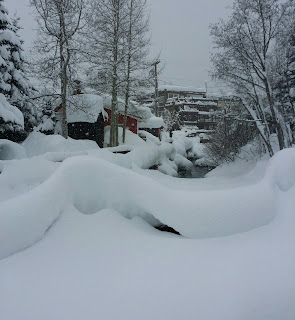 February's numbers were pretty damn impressive considering my current state of mind. I say that because death landed in my lap a couple of times in February. 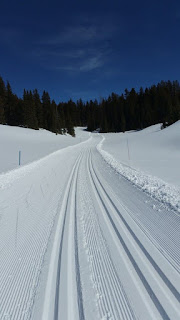 February 2017 posted a total of 32 hours and 267 miles. Thats when I was just doing my thing and not really grasping the fact that I would go over 3,000 miles on the commuter bike for the 2107 calendar year. 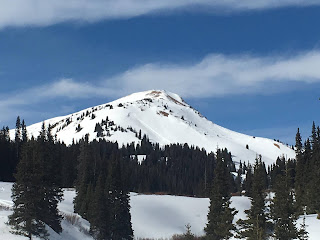 February 2018 recorded 331.6 miles on the bike and another 71.7 miles in my shoes. Strava always captured 42 hours and 4 new personal records. That simply blows my mind. And to think what those numbers would have been if my MAC trackpad hadn't gone out in Crested Butte. Thats another 4 days of missed numbers, including the demo day on the Fat Bikes riding the ski slopes of CB. 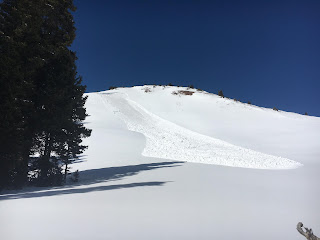 But without getting lost in numbers and BS, what a month. Ideal conditions weather wise, I have seriously enjoyed riding my bike, and its hard to wrap my mind around the fact that its Phuc-N March!! On the flip side, I leave for Vegas in about a week, Oh Baby 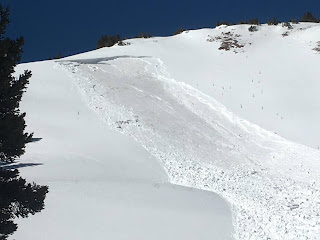 I am currently still participating in the Mile A Day & 100 Push Ups and added pretty much all new weights in the gym. Back on Monday, hadn't looked in awhile, pulled out my "chart card" and updated my weights. Tooting My Own Horn Here: 50 pound dumbbell one arm rows and thats up 10 pounds, 40 pound DB military press up from 27.5 pounds, and 45 pound DB incline chest press up from 30 pounds.

I still focus on full ROM and concentrate on slow and controlled movements. And thats kinds difficult for me sometimes. Like some days I want to rush through or while I am in mid rep I will start to drift off about work or something. But I seem to be managing well and STILL injury free after  2,831 push ups, workouts at the gym almost 6 days a week, and playing in the snow with the Boy Dog. 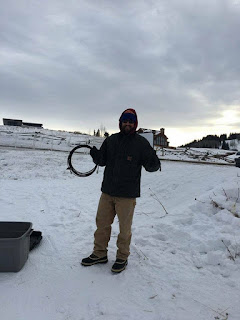 Speak Your Truth, Consider Ours Feelings Before Be Reactionary, & Pound That H20,
Cheers
Posted by The Padre at 10:44 AM 8 comments: