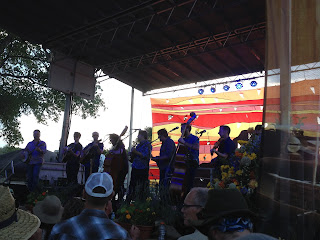 Friday opened up with a little known band named Let Them Roar. Families began pouring into the festival grounds while these mountain folk taped into a soulful roots, rock, and raw improvisational jams. A perfect welcoming while attendees were looking for that sweet spot between the speakers.

This Festival is surrounded by well established cotton wood trees, beautifully well kept lawn for NO dust, and the Mighty Colorado River flowing by with easy eddy outs for a quick dip. Come and take advantage of this event next year. 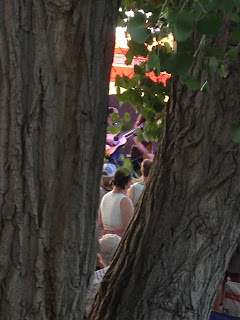 The Sweet Lilies, Mayhem Gulch, and Lonesome Days shined like a whiskey-fueled campfire jams on a crisp summer evening in the Rocky Mountains. I chose to bail out during the Friday Headliner Shel and stroll on back to camp where pickers were already finding their groove. 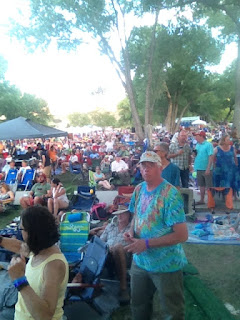 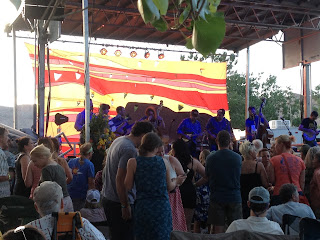 The Travelin' McCourys were a show stopper and commanded respect. So Tight, So Damn Talented. Amazing story telling between songs with life long dedication to the power of bluegrass music. Then, The Jeff Austin Band came out and covered damn near all the Yonder Mountain String Band Tunes.

Don't get me wrong, they were good, but predictable. They were basically a warm up for the Phuc-N Fantastic Grateful Ball!! This one of a kind collaborated set features a boundless musical adventure through timeless music of the Grateful Dead.

Accompanied by the most perfect sunset ever!! My iPhone didn't quite capture the true moment in time but damn was it ever memorable. All of us were singing and taking photos in rhythm of Grateful Dead jams. 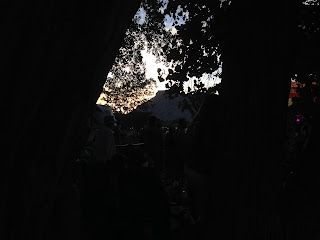 The festival grounds were packed full of all walks of life. Most of us were singing along with the band and the ONLY disappointment was the fact that the set ended at 9:05 PM. We all kind of looked at each other as if someone had pulled the plug during a Jimi Hendrix solo. 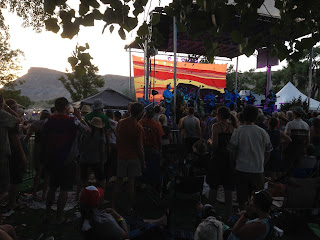 We all filtered out to the camp grounds wondering why such an early ending but the picking in the camp grounds were Bitchin' Camaro for sure. We played under a near Full Moon, we sipped off different top shelf beverages, and 2AM appeared rather quickly. 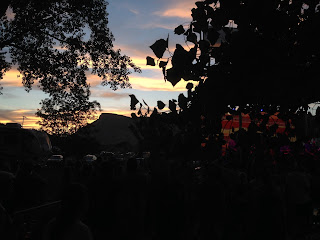 The Camping area emptied out Sunday Morning??? It was clear to me that everyone was there for the Grateful Ball. Most of those folks missed out on a brilliantly timed opening act by Harpeth Rising. WoW!! Building from the tonal depth of the cello layer in the shimmering sounds of the violin and the strikingly natural additions of the banjo to create a sound at once familiar and impossible to categorize.

Bloody Marys tasted smoother while Harpeth Rising made way for Parsonsfield. Another tight traditional and jubilant indie roots music. A few cover tunes rang out but mostly an original set of tunes that were obviously well played. 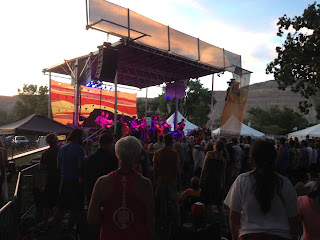 I was excited to finally see LiL Smokies at 3PM on Sunday and they brought the beats!! They have a very unique blend of bluegrass, new grass, exquisite musicianship, and unique originals. They new grassed an original, into a Supertramp, into a Prince tune, and then back into their original song. 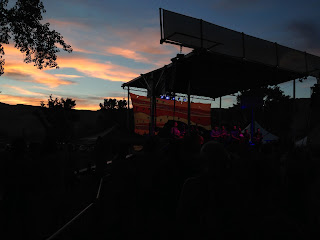 So Keller and The Keels had a little snafu at the airport in Denver so some locals took the stage and we VERY well supported by us locals who were still in attendance. Hugh Phillips and Pete Langford from Avalanche String Band joined two others from Bluegrass Offenders Band to play traditional tunes while we waited for the arrival of Keller Williams. 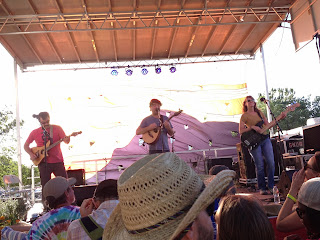 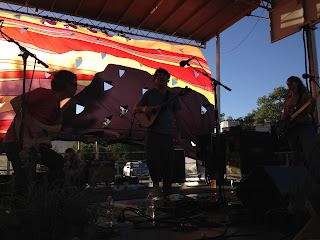 The phenomenal instrumental technique of this group is complimented by the amazing range of vocal styles captivating and inspiring audiences of/for all ages. They rolled through an edgy rock tempo, a bluegrass vibe with a ton of notes, into a Keller original, and back into a rock format without missing a beat. 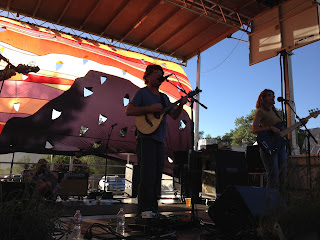 At one point, they started Breathe > Steppin Wolf's Wild Side > Paul Simon's Still Crazy After All These Years > Butt Hole Surfers Tune > Breathe. Super tight and never stopped between songs. Even when Keller was addressing the crowd, Jenny Keel fingered her Phat Bass, then into the next tune.

I am bias when it comes to Keller and Jam Bands but these guys stole the show from the whole weekend line up of talented musicians. I danced my A$$ off and will always remember Keller and The Keels opening up with Port-a-Pottie. Totally scripted for my weekend during the 9th Annual Palisade Bluegrass and Roots Festival. I haven't missed on yet and I can't wait for the BIG 10th Annual Party!!! 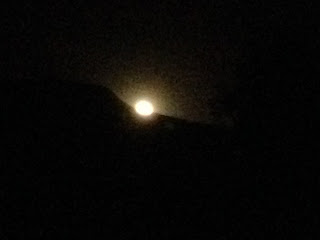 Tomorrow I start working at Country Jam. Oh Boy. Country Jam is in its 26th year and always has remarkable line ups. Its going to be HOT, like cooking eggs on a sidewalk hot, Townsquare pays me very well so I can't bitch to much. But feel free to wish me luck during triple digits fahrenheit.

What Could Have Been

The Grand Enduro Write Up On PinkBike And Killer Photos


Cheers
Posted by The Padre at 8:28 AM No comments: 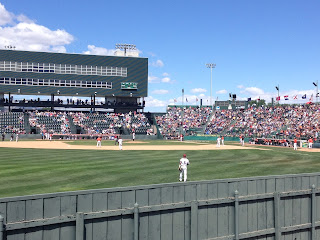 I so thrive on watching 18-21 year olds blasting the ball out of the park!! These kids are amazingly talented and the weather has been perfect for baseball. 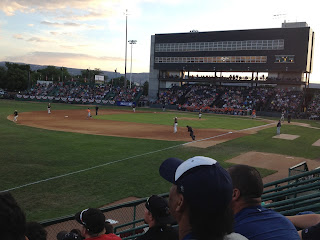 JUCO is held right here in my backyard every year and brings in folks from CA, TX, FL, AL, UT, MO and TN.

Just to name a few states. These games are beyond exciting and almost every game posts double digit final scores. A few mercy rules came into play. And these kids are so fast that Triples are not uncommon.

I grab a pass every year which makes it so much easier to come and go and catch some of the action. I passed on most of the high noon games to dodge the heat. Sat, Sun, and Monday of Memorial weekend offers 4 games a day. And you ARE allowed to bring in your own food, snacks and NON alcohol beverages. The Dude & I consumed a full bag of peanuts that he brought in. 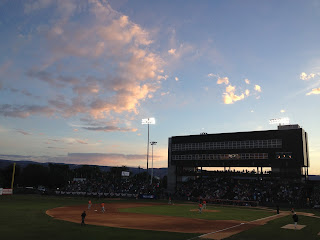 Its a double elimination tournament so every team is guaranteed two games. The fans/family members are passionate as all get out and have different traditions that are quite entertaining.

One group created a game that was addicting as all get out. The outfield fence is covered with sponsors. So everyone ( small group of us ) picked three sponsor signs and when the ball is hit to OR over that sign, you collect one point. Damn It Was Fun!! 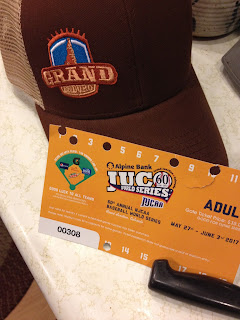 Tonight is the Championship game between San Jacinto ( TX ) vs Chipola ( FL ) at 7:05pm. San Jac just so happens to be the defending Champions. Should be a pretty good games as both teams posted only ONE error all week long. A solid Defense wins Super Bowls, Tennis Opens, And World Series Titles.