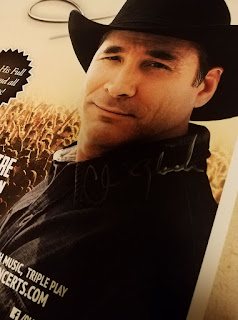 Talk about a showman! I received a text a few days ago asking me if I would be available to usher the Clint Black show at the Historical Avalon Theater. Now, I pictured a bunch of blue hairs needing assistance with everything.

Not the case at all. Sure, there were a few oldies but the audience was a full spectrum of ages. A majority of them were in line before the 6:30pm doors. I would have loved to have set up the GoPro time lapse for when the "rush" roamed on in.

I was more than happy to usher the upper mezzanine area. Everyone pretty much was seated way before the show & I was able to visit with a number of familiar faces.

The audience roared with excitement as Clint walked onto the stage at 7:44pm. His first tune must have been a hit because everyone stood from their seats and cheered and raised their arms in hopes of being lifted away.

The 6 of them played for about 30-40min before they walked off stage and allowed Clint to play solo. He told some brilliant tales of Willie Nelson, shared writing stories from 1987 tunes, and knew just how to command attention from his followers. So Impressive


I can understand way these fans paid over $60 smacker to see him live. One of his biggest fans of the night was a woman in her 50's, she has down syndrome, danced her night away. She would pump her arms in the air, shrug her shoulders, and twist and shout which every song. I Was Stoked For Her

The shows encore began at 9:30pm and came to a closure at 9:57pm. Clint Black never left the stage, played the harmonica, ripped on an electric guitar, acoustic guitar, and whipped the crowed into a frenzy with ever nip off his bottle between songs. Again, Total Showman