Not ONE but TWO Strikes On Film


I placed the GoPro up on the roof facing east. The settings were 10sec time lapse mode, 5mp, and the battery life lasted about 3hrs. So at 1:37 I slowed down the video in iMovie as Life Flight cruises across the screen and looks as if it blows up against the Mesa. Then again at 1:54 I slowed the video down to capture the strike. I then added just the photos of the two strikes at the end of the video. The sound track was provided by The Cheese from a 2003 show in SF,CA
Why I am so stoked about this is because the GoPro's night vision is absent big time. As soon as light is lost, the GoPro has been useless. Once, I time lapsed a full moon rising and it was only worthy because clouds rolled in and the moon danced in and out for awhile. But lacking the distance, light, and clarity brings me to post two thumbs down. 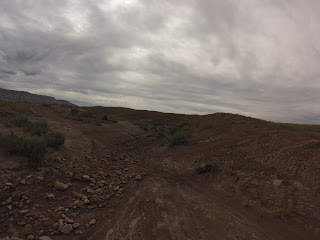 At some point this Spring, off 27 1/4RD, heavy flooding took place. This was a road that actually went to the right and curved around and now there is a new road to the left. I took this shot because of all the exposed rock in the wash out bed. 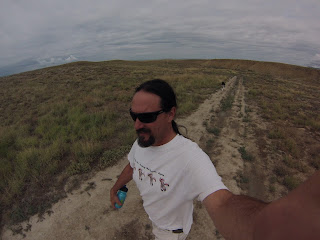 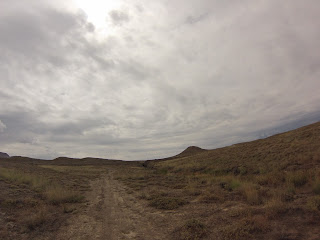 Another area that washed out. Click on that photo and you will see the flat road from L-R and the huge hole where the road used to be. The hills to the left is where I would do hill repeats last year while training for the Lead King 25 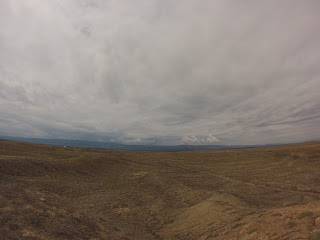 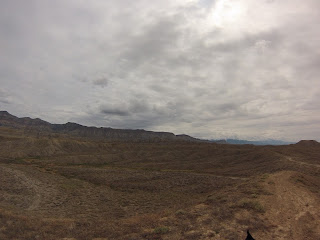 The hill climb hills, looking back towards town, and me and the Boy Dog on top of another smaller landing. 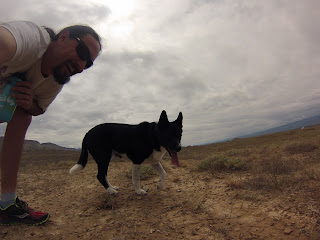 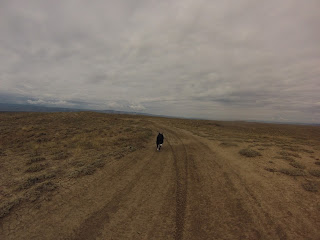 Shadow Boy leading the way. The ground was so soft from all the rain and him and I clipped along at an easy 10 min mile pace at this point. My cadence was perfect, my hips were rolling, I was leaning forward, hadn't lost my cardiovascular system just yet, and I felt in control as my arms synced w/the rest of my body mechanics. I felt strong and thanked myself for all the time dedicated to the gym this year. 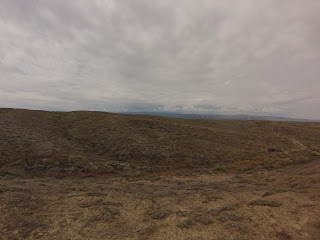 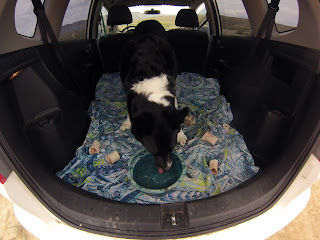 The Boy still thinks he needs a new bone for the car ride. Classic or What?!?!?! He is the best damn dog, he is loyal as all get out, he loves to run, he checks on me all the time, and he knows that this will be the day that he catches that damn Bugs Bunny. 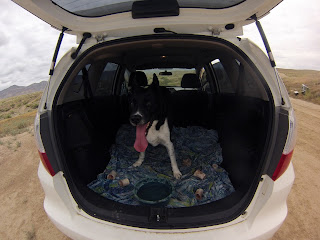 And just for the record, I did cry, like really choked up. I was watching the Tour and witnessed poor Tejay's body shut down w/every turn of them pedals. When the team car pulled over to stop him I thought maybe it was some kind of consultation but no. When Tejay dismounted I cried w/him. I can't imagine the dedication that his whole team has put in and to not make it to Paris SUCKS!!!! I am not a pro cyclist, I have no idea what goes into it, but I can feel their pain. See You In August Van Garderen