Not My Best Time Lapse But Still Effective For Sure

So July ended on a positive note. The whole month was a blast but seemed to fly on by. And now we are embracing August as its already the 3rd day of the Boy Dogs Birthday Month. And yesterday was an eye opener!!!

There is an amazingly generous woman a few blocks over that allows friends to borrow her little RV Camper. I am not usually a big fan of this gas guzzling beast style of camping but both times The Boy Dog & I have driven this rig its poured down rain at some point. Not having a wet dog in a tent is rather wonderful & relaxing to say the least!!! We can enjoy the sounds, the wet weather smell, & remain totally dry & comfortable. SCORE

So I set the GoPro up on the rooftop of the RV facing in a northernly direction & built a small little camp fire inside the well established fire ring. You can even see some smoke during the time lapse down in the bottom right corner. And be sure to checkout how green the hillsides remain & its AUGUST!! You would think it was March or April. 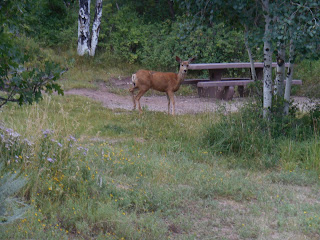 So the GoPro is capturing the cloud formations rolling around in the sky, beautiful bed of coals, meals are in the works, & the Boy Dog tells me he could walk if I was up for it. So away we go, The Boy Dog walking just as proud as can be. We walked along the road & came across an old silver rusty gate. We unhooked the opening & proceeded along an old jeep trail that hasn't been used in years. Anyone from Tenn. will be able to picture this rolling hill terrain. We are talking lush emerald green meadows with wildflowers in full swing, deer strolling along, aspen tress cascading dancing shades of protection, & cresting each hill painted another BoB Ross oil story. Over each hill was another welcoming meadow of colors, deer, & very lush juniper trees, aspen trees, tall reeds on the east side of watering holes, & more well timed blooming wildflowers. Perfect Timing!!!

Shadow Boy had on his backpack & we were clipping along at about an 11 min mile pace, I am guessing here as I haven't been caring around my Garmin. Mostly we were soaking up the scenery & watching how the deer focused on us but knew we were no threat of any kind. As we were hiking along a "ridge line" with sage brush about knee high & pretty much walking along a wild game trail the Boy Dogs demeanor shifted. His sniffing, panting stopped & he was totally on point. He ever so slowly   stepped like this for about 10 more feet and thats when I damn near sh&t myself. Down & kinda around the treeline was about a 400lbs brown bear. He was working over a stump for grub worms & I will never forget that sound of a bear ripping "open" an old stump. I have seen 700+pound bears so this wasn't the most massive kinda bear stories but still, Its A Bear!!! Its a big bear!! Shadow Boy & I just stared at what felt like an hour but was maybe 30 seconds tops. And the damn GoPro/camera were sitting safely back at camp. Because of all the rain, cooler temps, & fresh berries I would have taken a photo for sure!!! Shadow Boy & I called this our turn around spot. Again, thats when a little panic started to brew up. The Boy Dog & I were cursing along pretty quickly & we were only on wild game trails. Where the hell are we Boy??? Now, I knew the main dirt road was towards the east & if we bush-wacked along we would eventually find that road. So it wasn't a full on panic moment but it was an awaking of sorts. Over the top of the second hill from the bear was we picked up the pace to a below 10min mile pace of hiking. No Extra Sniffing. Every crest opened up another meadow that was absolutely beautiful!! I can't even describe how light I felt on my feet. Me & Shadow Boy, Picture Perfect Settings, So Quite It Hurts Your Ears, Bambi Dancing Up Towards Cover Under Happy Healthy Trees, & Again, The Wildflowers, Totally Unreal….. Like Crazy Unreal

GOALS: A number of goals for this month!!
#1 Its The Boy Dogs B-Day Month So You Know What That Means!!
#2 I will FINALLY be meeting the famous Ursla at an Ortho workshop in Crested Butte next week!!
#3 I know I will see at least 3 new clients this month.
#4 Taking new body measurements after 7 months of dedication at the gym.
#5 Focusing on higher reps of leg work for endurance workouts at the gym.
#6 Pulling off the original shower tile in the master bath, oh boy.
#7 Sit in on a yoga class at the downtown gym.
#8 Being Way More Present & Thinking Before I Speak
Posted by The Padre at 10:25 AM