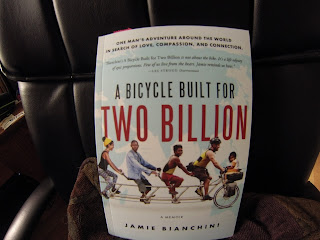 I just can't even begin to recreate Jamie's speech from the other night. This story is unreal and inspiring for sure. Jamie rode a tandem bike for 6 straight years and touched so many lives. He broke through language and cultural barriers and blew my mind. His family continues to ask him about what he will do when he returns to the states. In my own words, he found a wife, so he will start a family when he returns. Some years later, 2015, he has two kids, same wife, and goals of giving back. His presentation was full of photos, classic tales from different countries, and a true raw emotional experiences. 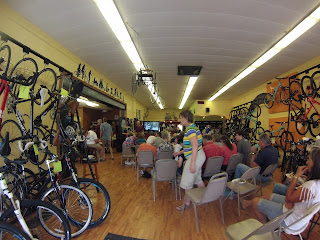 The turn out was awesome!! Jamie mentioned that this was by far the best turn out during his book tour this summer, sponsored by KOA Camp Grounds. This photo is from one side of the Brown's Cycle Shop. There was another full room to the left were they served little munches to snack on. By 6pm this room was shoulder to shoulder and a fascinating Q&A afterwards. From meals to scary situations to favorite to stolen bikes. I am still so thankful that I went!! Will start reading this book in CB.

Tim Long: I saw that Tim threw out the idea that he may want to have a "crew" around while he tackles the BEAR 100 this September. So after a few e-mails, a sit down meeting, we agreed to travel together. Two different Worlds, Two different Thoughts, Two different Agendas, Two different Adventures, Two different Goals, & Two creating memories from stories to be shared at a later date. Needless to say…… I'm Phuc-n Stoked!!

Clients: Scored my first new client of the mont last Tuesday. I have known him for about 8 years now and he reached out. We booked an appointment as he still currently lives in Boulder,Co. He way dug the Ortho releases throughout his elbow, Ulna, and Radius. He does carpentry for a living so his forearms were as tight as you could imagine. Ortho is so sweet in that you don't have to dig and bruise someone in oder to have some relief down the road.
Another client came in and told me that she feels great and doesn't have any goals for this session. So love that to hear. We did a pelvis balance and went on to some organ communications. Something was let go and showed up in her nick. Well, C2 really. We performed a very simple shoulder release and then held her head in a preferred position until her own nervous system reeducated itself. She smiled, exchanged some energy, and happily walked on down the hall.

Crested Butte Colorado: I know I have talked this to death but I am almost out of my skin about this upcoming Ortho workshop in CB. Its not hard at all to believe that its just around the corner. Almost all of my clients this past week have lit up as they relive their perspective regarding the wildflowers up there. And thats just a small slice of the pie for whats to come. Cant wait to see the other Ortho folks, staying with an incredible family, & the meteor shower will be just ramping up. And I will say it again, 2015 was been totally epic!

Best Dog Ever: Its Still The Boy Dogs Birthday Month 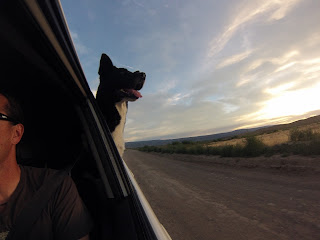 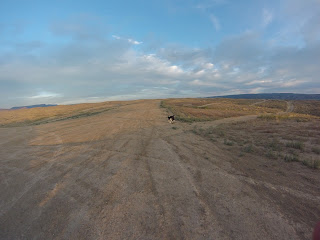 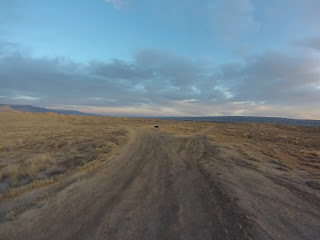 Legs felt really good at this point. I didn't care about time, pace, cadence, or volume. I went with the Boy Dog vision of being in the moment and having the best day ever!! Each step was approached by how I felt and where it lead me. Meaning…..  When the Boy Dog went up a hill, some moments caused me to power hike the hell out of it. Some of my foot strikes almost pushed me toward one side of the trail or divot in the road and I just relaxed into. The Boy Dog ran like every sound was created by Bugs Bunny. Zig & Zag & Back & Forth. We both had our different observations but were happy as can be on common ground. 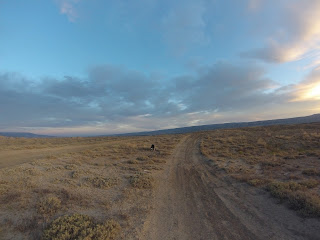 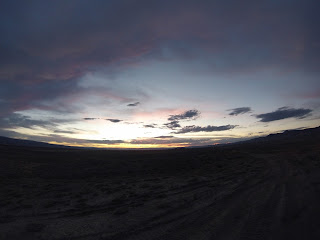 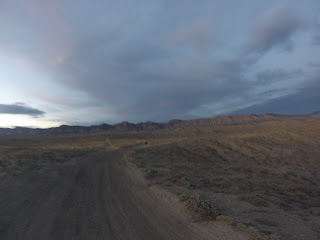 MAD Racing: MAD Racing is so on this Fall!!! 6 cycle cross races and 4 timed 5K running/trail races. Including a 5K on the airstrip out at Walker Field November 14th 2015. How cool is that??? Running a 5K on the runway with potential of hosting a cycle cross race next year. Apparently the airport has a back taste in their mouth from two years ago and passed on the opportunity to host this event last year. So I have really hammered it home to Klishy that we really want to go above The Call Of Duty for this one. Like bring a ton of enthusiasm, professionalism, and empower the guest. Not Runs but treat them like GUEST!!  I know I get a little worked up over these events and over think them a bit but damn this will be huge exposure of what we are trying to accomplish. Hell, backing up our mission statement.
Posted by The Padre at 10:44 AM