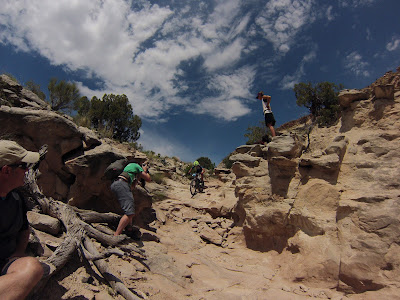 Epic Rides hosted an incredible 4 day "festival" this past weekend. The 3rd annual Grand Junction Off-Road 2015 was a huge success and rides from around the WORLD came out in full force to tackle our looping systems.
Here is another link to a write up describing the event and I just happen to be in the very last photo. 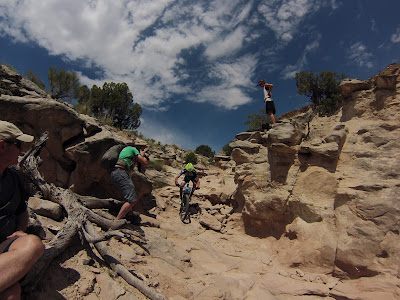 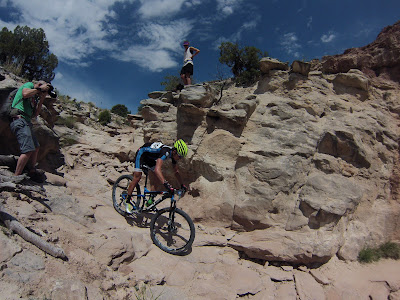 Thats Right, from around the world!! Backing up a bit, Thursday night was the kick off party with James McMurtry at Edgewater Brewery. The music was OK, the attendance was PACKED HOUSE status, and the sunset was perfect. Like, everyone was pointing out the cloud formations as they turned from pink to purple to that ever so frightening display of thunder cells moving in. And then the hail pounded on down!!! Its Was Awesome!!! The crowd scurried indoors and left about a dozen of us standing around to wait out the storm. 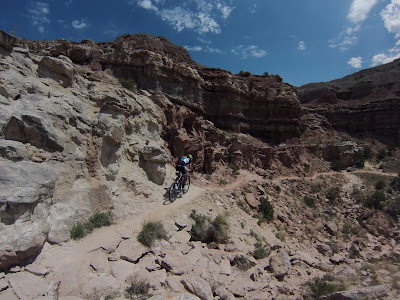 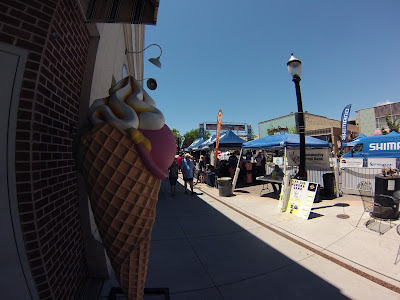 Friday was amazing weather wise. After receiving a very unusual amount of precipitation over the past few weeks, Friday Was Gorgeous!!! Epic Cycles was in full set up mode and venders for the Bike Expo were pulling in from all over the states. Epic also partnered up with the once named Arts & Jazz Fest of GJ. So Main St transformed into a huge beer garden, 5 stages for live music, vendors, and a Start/Finish right on Main St. 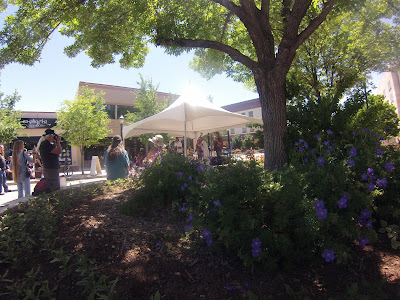 Friday was also host to the 15 Grand, 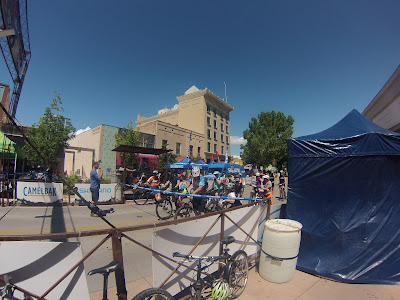 the Klunker Krit, the men/women Pro Criterium Races, and a live performance by Sam's Funky Nation. The Dude & I decorated our bikes while BBQ'n and both dogs checked in quite frequently. He & I dressed up and downtown we headed. And too my surprise….. GJ came out in full force!!! The costumes were most outstanding!! Very well attended by both riders and spectators. The Klunker Krit was a 2 lap parade of the race course and then the Pro Riders took off like a shot. Thrilling is an understatement. And Sam's Funk, Off The Damn Hook!!! 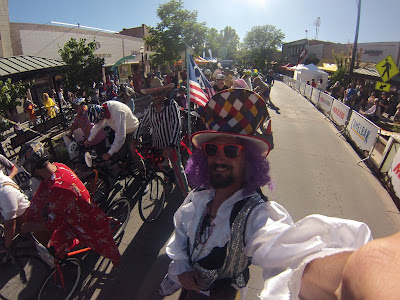 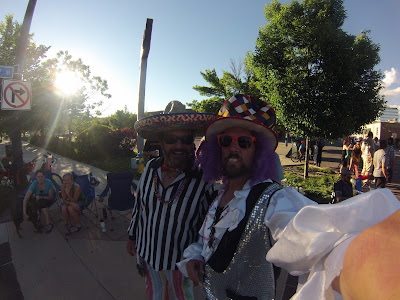 Saturday morning started out way early after a pretty late night and thats OK. I drove up Little Park RD just ahead of the Amateur 40/30 Grand Riders and parked just above the Gunny Loop portion of the race. Something like mile marker 7 of the race.
This was my 1st year of NOT volunteering during this event and I wanted to simply soak up the atmosphere. And That I Was Doing!! I walked part of the Gunny Loop and called out names of local riders, snapped some photos, and shot some video. 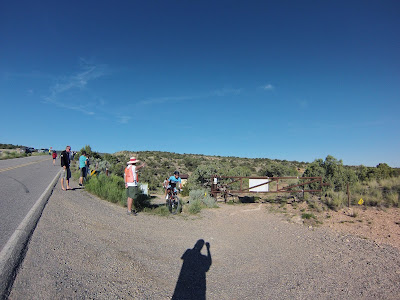 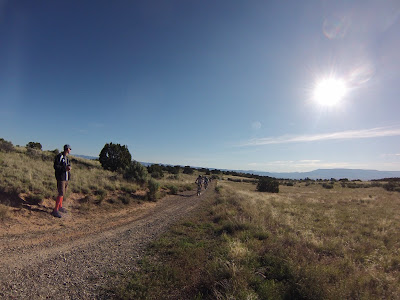 Hello Mr Sun, thanx for making an appearance today. In the orange socks stands Mr B as he is waiting for his wife to roll on through. The leaders at this point looked strong and then it was as of a switch was flipped and the out of shape riders made their way up to this point. These folks were suffering and I kinda felt bad for them because some of then still have 30+ miles of hammering. But still a lot of smiles pasted by me and I made it a point to THANK EVERY RACER for coming out and riding in our valley of awesomeness. 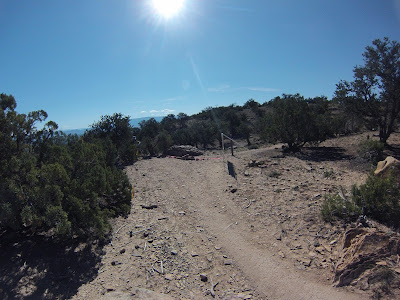 I made my way up Little Park RD and parked across from the staging area of Bangs Canyon. It wasn't long before the 30 Grand Racers were making their way out of that section and the 40 Grand Riders were flying down on the pavement after pounding through Rough Canyon. Turns out, damn good thing I was there because the "volunteer" was totally useless. You have to understand that 40 Grand Rides AND cars were coming downhill and 30 Granders were turning onto that same road. So I took over and shouted out to the 30's to turn tight when I saw cars/racers bombing down the road. And still THANKED them for coming out. 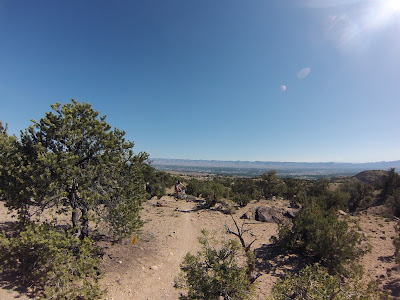 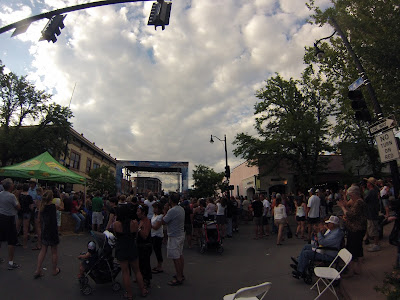 I mean, LOOK AT THAT VIEW!!! What a killer course and extremely challenging!! Saturday brought out a ton of locals for our local bluegrass band Stray Grass. The problem was that the sound was awful. When you can't hear the Upright Bass, sound engineer needs to go. Then, Shakey Graves came out with his "band" and hammered out 5 or 6 songs. I witness my friends walking away. Shakey then played another 5 or 7 song acoustic by himself and then brought back his band. Afterwards, the general consensus was that he should have played acoustically to start out and then hammer out songs later in the night. 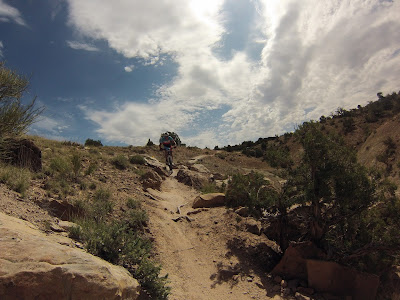 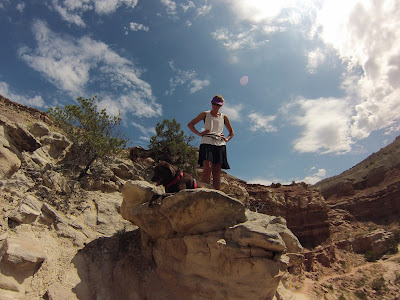 Sunday was totally radicle!!! The Pros ripped and made our trails look easy and manageable. I just met Kya on Saturday during a performance by local We Speak Imagines. Her and her dog Willow were hanging out in this spot.
I shot video along the trail and filmed most of my "movie" from this location. After about 40 riders had come through, I hiked back out at about a 12min mile pace. I was fully inspired by all the beautiful quads I had just seen. I do believe that I will be focusing more on my own gluts this summer!!! 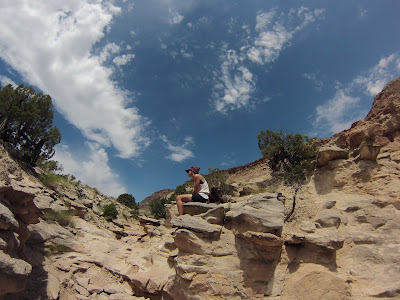 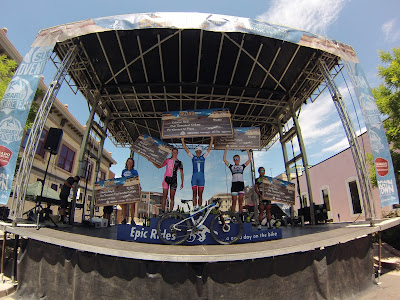 And what I want everyone to understand and where I am coming from, its this, this whole weekend was really just for me!!! I went full on selfish and planed the weekend on the idea of finding the best possible outcome. That was achieved and more. I saw so many wonderful faces that includes folks I haven't seen in over ten years. I crossed paths with travelers from St. Louis, Idaho, Louisiana, Texas, Nevada, Montana, California, and bloggers from right here in Colorado. The Atmosphere was unbelievably heart warming and I was totally in my element. Having a blast, hugging old friends, hell, hugging ODD friends, but just having that satisfaction of positive interactions and happy people on every corner. So Yes, These Past Few Days Were Just For Me…... 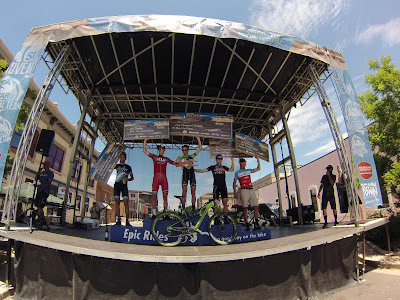 ….. And even if it came off that I was bitching about how loud the music was or something could have been different, the fact is, Epic Rides held an amazing event that everyone MUST add to your bucket list. Something a rider told me on Sunday was how he was able to stay downtown in a hotel, put on his helmet and ride to the starting line, and how his wife had something to do all day because of the Art Fest & All The Live Music For FREE!!! How Awesome Is That?!?!?!
Junk Town, I Am Proud Of You!! Epic Rides, Thank You So Much For Hosting This Amazing Weekend!!! Dave Grossman, Hats Off Brother!! And to you the reader, thanx so much for stopping by and I can only hope to see your happy A$$ next year for the 4th Annual Off Road Endurance Race in Grand Junction Colorado!!!
Posted by The Padre at 10:00 AM