This Past Weekend, Memorial Weekend, Was Totally Epic!! Friday started off as like every American house hold, The Dude, Ol' Smokey, The Blue Z, & Shadow Boy watching me BBQ the nights dinner and setting the precedence as whats to come throughout the weekend.

Saturday morning started off early as the Boy Dog and I walked the quiet streets of downtown GJ. We actually had some humidity in the air and my legs felt awesome. My hips are rolling, my lower legs haven't had any kind of burning during or afterwards, and my hamstrings are feeling stronger, FINALLY. I played around with my breathing again and started exhaling during my non-dominate foot strike. After our walk, The Dude came by and we headed for Stoker Stadium for Game One of the National Community College World Series thats held every year in GJ,Co. Thats Right, JR College World Series!!! 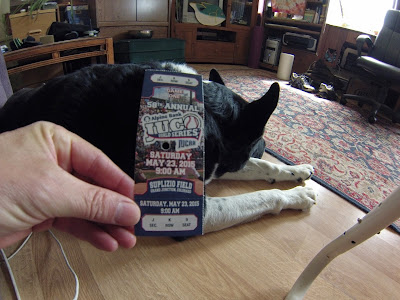 I scored 2 FREE tickets for Game 1. Unreal tix, right behind home plate, about 7 rows up. And I kinda forgot that we were watching 18 year old kids until they started kicking the ball around the infield. The 1st inning delivered 3 errors, a terrible 3rd base coach call sending the runner home to be thrown out. He totally should have held up the runner and the bases would have been full. The pitcher was clearly struggling and the 3rd base coach ran them out of the inning. More errors later, the 6th inning finally produced another run, and the final at bat by the team down 2-0 brought out all the excitement. Both teams were from Texas, BTW, and the bottom of the 9th gave us bases loaded, errors, and damn near ALL game, the 3rd call strike was dropped by BOTH catchers and a throw out at 1st was needed. VERY ODD. And nobody could cross home plate in the 9th. 2 nothing was the final score in front of 5,700 fans. Free Is Good

After a rainy afternoon, some short chores out back, more BBQ-n, Saturday was a wrap. Sunday came WAY early as the F1 Monaco Grand Prix started at 5:30am, the Indy 500 started at 10am, and my boney butt was on the bike by 2pm. Sundays ride was awesome. I treated every car as if they were driving drunk!! I rode parts of the River Trail System, rode out to Palisade, and struggled with HEAD WIND BOTH WAYS!!! But No Rain. So thats cool. But man, did the quads feel great!! Full Range Of Motion in the ankles, really engaged the gluts, and worked a very high cadence when riding up hills. I.E. Burn Them Lungs Baby!!! Back to the BBQ Sunday night and relaxed with The Blue Z's company. We sipped tea, threw some cards around, and called it a night by about 9pm.

Monday, walking the Boy Dog early, again, dead silent streets, and calisthenics. Loaded up on carbs and did a few more chores and back on the bike I rode. I really took the first 10 miles super easy. I expected my legs to me stiff, slower, and unmotivated after Sundays rid but to my surprise, My Legs Are Coming Around!! Love That. I rode into the wind and witnessed that the Colorado River has come up in a BIG way. The fruit trees are healthy and lush. Not as many bike riders out as I anticipated. Thats Cool. My ride back was with the wind and I hauled A$$. I Did. I was on a long side street and rode behind a car for that 3 mile stretch and I hammered the pedals. Even received the PEACE sign from the female driver as she had to stop at the light and I turned towards the River Trail System. I know that that acknowledgment wasn't much to anyone else but it was huge for me. It lifted me. Love That 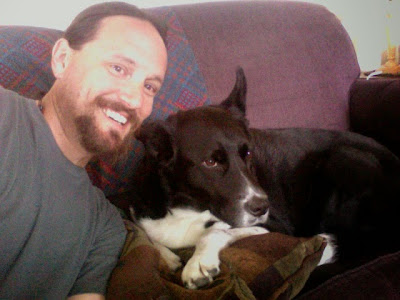 Back on the foam roller, standing in front of the BBQ, and catching that crazy Golden State vs Houston Rockets Game 4. Damn Good Way To End The Three Day Weekend. And Notice, No Alcohol Was Consumed. And that will change this Thursday because its the Grand Junction Off Road Endurance Weekend!!! I Cant Wait!!! Tons of free live music, huge bike expo, Kluncker Kit Race, Pro men/women crit race, and mt bike racing at its finest. Epic Cycles puts on a massive killer enevt and this will be the 3rd annual event. Epic partnered up with the formally know as Art & Jazz Weekend so there will be art booths, 4 live stages of music, expo, beer gardens sponsored by Sierra Nevada Brewing, and MY FAVORITE EVENT….. THE KLUNCKER KIT!!! Hold On Folks….. Photos 2 Come
Posted by The Padre at 12:06 PM