Bikes. They Are Everywhere People!! 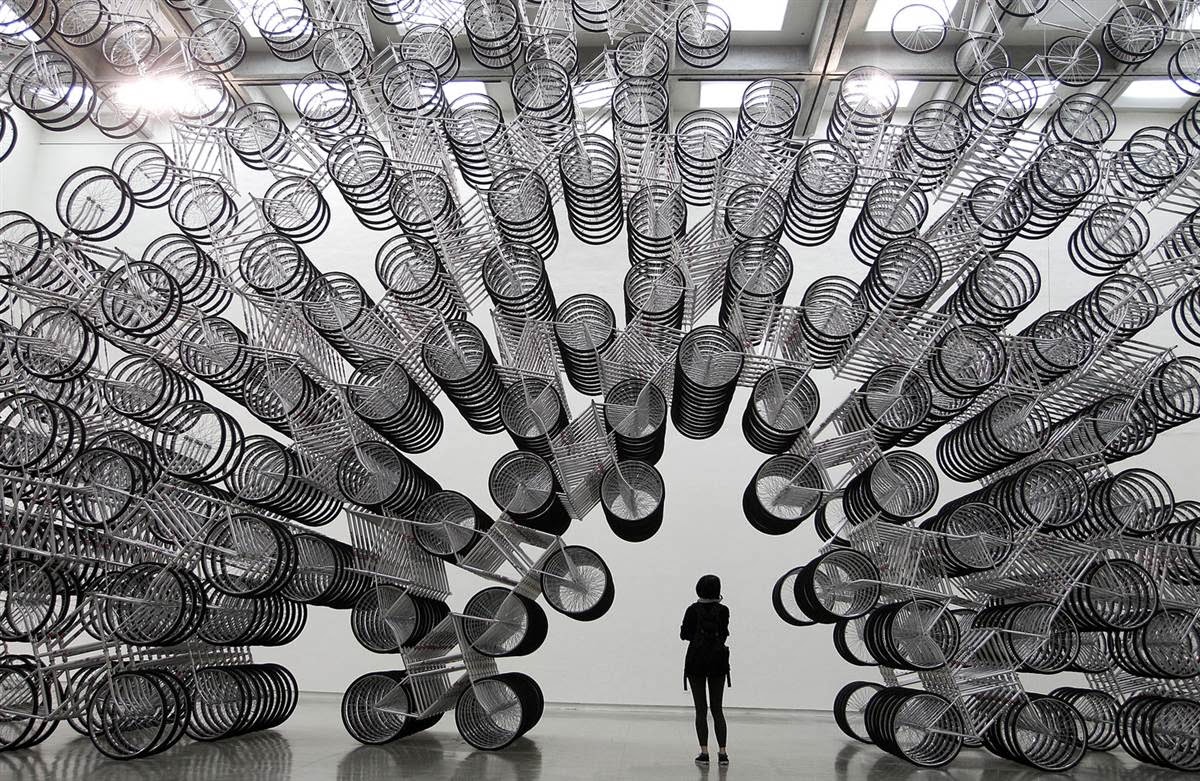 So yesterday I wrote a quick note about how I was feeling about riding the bike. Or lack of riding and feeling good about it. Well, that festered inside me 4 awhile and away I went. Thats right, jumped on the commuter bike and rode around town. I completed almost all of my errands around town and even had that moment of feeling I over dressed. The day felt warm and it was only 31F. I began 2 notice how many drivers were dressed or bundled up tight in their cars. It was weird because everyone was wrapped up like cocoons and missing the fact that it was beautiful day out. And how many drivers had that DEAD look in their eyes as if they just weren't alive behind the wheel. Then it dawned on me that nobody was on the phone. Its strange 2 me because all of my observations happen so quickly because I am scanning around w/my eyes at sculptures around town and birds overhead. I don't recall taking in many of the drivers while I was riding along. I even remember checking out some of the grass thats more green than brown. Then a flash back 2 drivers flying on down 5th street racing 2 that next red light. Hands at 10 & 2 and that empty stare into what????? During my ride I was just wondering the roads and taking in the bluebird Colorado day and was down 2 my last stop. The Bank. I has leaving the Post Office and heading 4 the Bank. I am riding east bound on Rood Ave and was about a block from the bank when it happened. Again, I am riding east on Rood and approaching 7th street. I am coming up on the zone were drivers make that decision about picking a lane 2 drive 4ward, make a left from that same lane, or pull over 2 the right lane and turn right. Here comes an audi so close 2 me that their side mirror brushed wind over my handle bar. It woke me up because it was the only car that passed me on Rood Ave. About the time I wanted 2 yell something at this woman, she turned on me 2 make the right onto 7th. Her rear bumper caught me front wheel and out goes my left leg because I was going down. Some how I didn't blow out my knee catching myself and I didn't hit the pavement. This lady never stopped at the intersection and rolled on her merry way. Total Hit & Run!! I had the post accident jitters 4 sure and as I gathered myself a guy pulls up next 2 me and claims he saw the whole thing. He quickly made sure I was ok and said he was going 2 track her down. I told him don't bother because she will sue me 4 scuffing up her bumper. He mumbled something and drove off after her on south 7th.

The rest of my ride totally sucked as I was all phuc-d in the head. What if games rolled around in my mind. What if I broke a wrist?? What if she clipped my knee and my head was the 1st 2 bounce off the pavement??? What if her side mirror hit my hand and I went under the rear wheel?? Sure, I would heal and just deal w/it but what if I had died right there and my last posting was how I was enjoying the break from riding??? Who would take care of Shadow Boy?? I understand that there is a fallout 2 death but the one that really upset me is Shadow Boy would never understanding why his human never came home!?!?! My friends would be sad but would have some kind of closure, my family would move on and say things about how he died doing what he loved, but Shadow would never be the same dog. That is so hard 2 shallow.

I never made it up 2 the rental, never made it 2 the bank, I just rode home and gave Shadow Boy the most love I could. And he knew something was up. He says he thought we were going 2 the Vet. Yesterday was my 1st nap of the year. Me and the Boy Dog butt 2 butt and away we drifted off as one.
Posted by The Padre at 9:39 AM