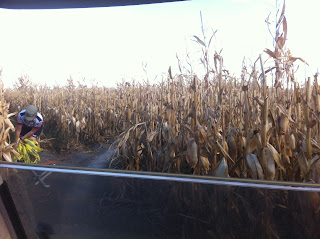 Riding the golf cart through the corn maze cleaning up after the 1st Cyclocross Race of the year. 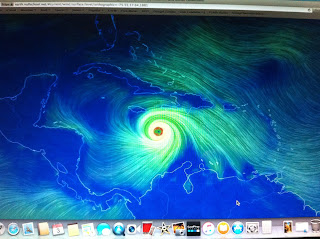 Shot of Mathews on Monday. Americans, you don't have a clue as to what a "MASSIVE STORM ROLLING" towards Florida really is. That title on the news cracked me up. Did anyone see the last TWO typhoons leveling Taiwan?? Not just one but two super typhoons within 6 days of each other destroyed all those little tiny islands south of Taiwan and off China's coastline.

The top speeds recorded were 185mph and 165mph and here Mathews hit Cuba at 125mph. Damn you American media!! 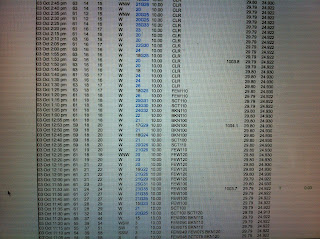 So I went on a little bike ride as per cross training schedule and check out these local wind speeds. Not fun at all. Side ways , back ways, front ways, you name it and Willy Wonka threw it at me. I do believe that I was passed by walkers along the river trial. Not really

However..... The fall colors are pretty damn impressive right now. Yellow leaves blanket our city streets and I so dig the sounds they make under my commuter wheels. And those fire red bushes that folks have their yards. Bitchin

Excellent number at the gym Monday/Tuesday. Monday was 40min on the dreadmill and chest/tri afterwards. Bumped up weights on every exercise but the skull crushers. Tuesday started the same on the dreadmill (45min) and back/bi. I only added more weight to the triple 8's because the 10's were already on the bar from the last guy/gal. And you know the Boy Dog is still on two-a-days

I have a radio show this Friday from 9am-11am and will be highlighting an old LP from Vin Scully's broadcast of Sandy Koufax's Perfect Game on September 9th 1965. You can stream the show at www.kafmradio.org

Tonight will catch the Giants vs the Mets and then ride on down to the sh*t hole Mesa Theater to catch Twiddle of $12. Tomorrow will be a rest day but will pull off an easy pace bike ride for a few hours. Friday looks to be a double digit trail run.

Seek The Best Possible Outcome
Posted by The Padre at 11:50 AM