A few weeks back, my drear friend Kelly asked me if I wanted some succulent plants. When I agreed 2 stop by, I had no idea that she was talking this pot of SUCCULENTS. Look at the above photo. This was an amazing arrange of plants. Like I said, I p/c these plants just before the hard freeze rolled into the valley like a blanket of fog over the city of San Fran. You can see that the ends are still holding brown. And now the tops look a beautiful green. Totally Alive!! 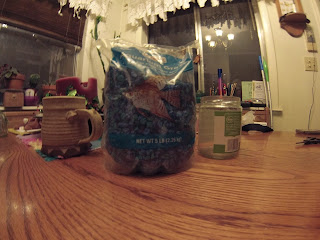 
I am recycling plants, glass, & soil for my Christmas gifts this year. I only had 2 purchase a 5lb bag of fish aquarium rock. Simple steps here. The blue rock on the bottom for draining & an indicator for not over soaking. After all, its a succulent. A small amount of top soil from last years garden that I didnt use for what ever reason this year. Classic. I dug around the root systems & placed them in their new locations. Maybe home??? Added a little more soil around the root ball & watered. Quite a fun little project 4 X-Mas.

Back 2 the longest day of darkness. Last Saturday started rough w/a drunken text at 1:40am from a friend. Dealing w/a new phone already made me uneasy about waking up at 4:45am 4 my radio show at 6am. So the rest of that night was filled w/Shadow Boy stretching & rolling around until I just realized that I was going back 2 bed. Thats when I saw that Mother Nature was there & ready 2 entertain me. Ready 4 the show I was, NOT being late was on my game. I enjoyed the hell out of my radio show. Not because it was snowing, that just helped. After my show was road trip time. Paonia was calling my name & away I went.

Craig Childs is an author, story teller, traveler, holy sh*t fire extraordinaire. He packed in the Paradise  Theater 4 his version of Winter Solstice. Local bango player Russ Chatman open w/a reading & away the night unfolded. And unfolded it did. Characters came up from the depths, apparitions were in the room, & visuals were displayed at the right moment in time. I so hope that someone recorded the show because I would love 2 hear it again. You must understand that by the 1st intermission my brain was overloaded. Completely. At one point, Craig is telling us that the boots he IS wearing were his Grandfather's boots & that story lead us into Craig holding his heart attack Grand dad while doing CPR & looking up at his dad asking 4 help. Could you imagine being in the same room w/your dad while your grand dad is passing??? What a dynamic!!! The whole night consisted of crazy wild tales. And done very well!!! By the whole town!!! Paonia, What A Place.

And now I am out of time. The last game ever in Candlestick Park. That place was built 42 years ago. Can ya believe its that old????? Stay Tune & More 2 come. And as always, thanx 4 stopping by my blog.
Posted by The Padre at 6:43 PM