Stage 2 of the Pro Tour 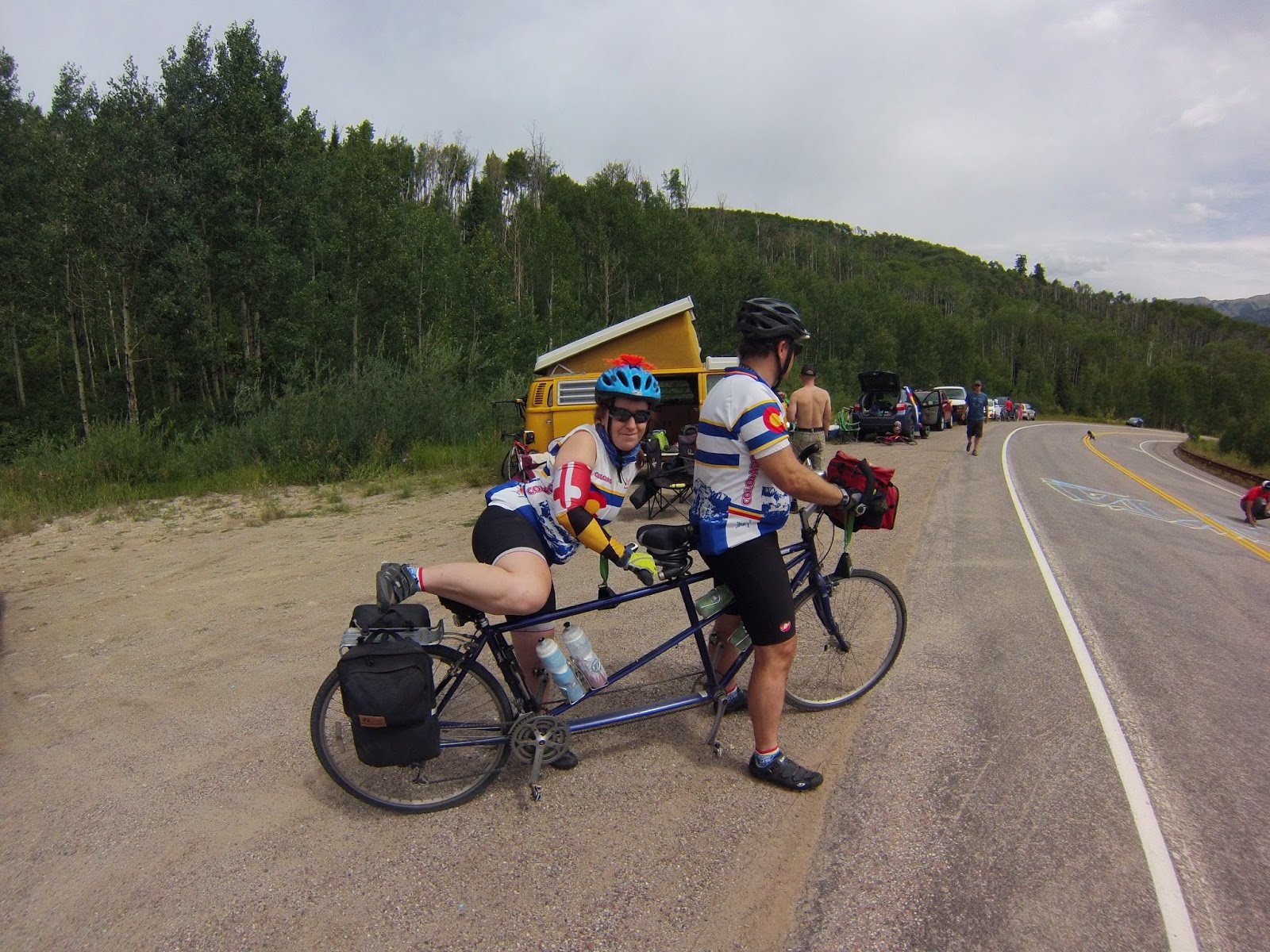 My day started at 2:47am, I just woke up, Shadow Boy next to me, my eyes were open w/excitement to look forward to. I had set my alarm for 3:03am but I was up and going. Started the coffee and loaded up the car as I was packed up from the night before. Out the door, after dog treats were handed out, heading for the beautiful foothills of the Rockies. My plan was driving up and over Kebler Pass and breakfast in Crested Butte. Driving along Kebler, best shape the road has ever been in, I was stopped by C-Dot and told to turn around. Kebler Pass was closed at 5am for the bike race. I showed the guy my phone and it read 5:07am. Told him," Oh come on man. I will drive slow." He didn't give two damn sh*ts about me or my day. So I returned to the little town of Paonia  for coffee and a breadstick from the Flyin' Fork Bakery & Cafe. What a place!!! I regrouped and headed up McClure Pass ( 8,653ft ) at just about 8:50am. 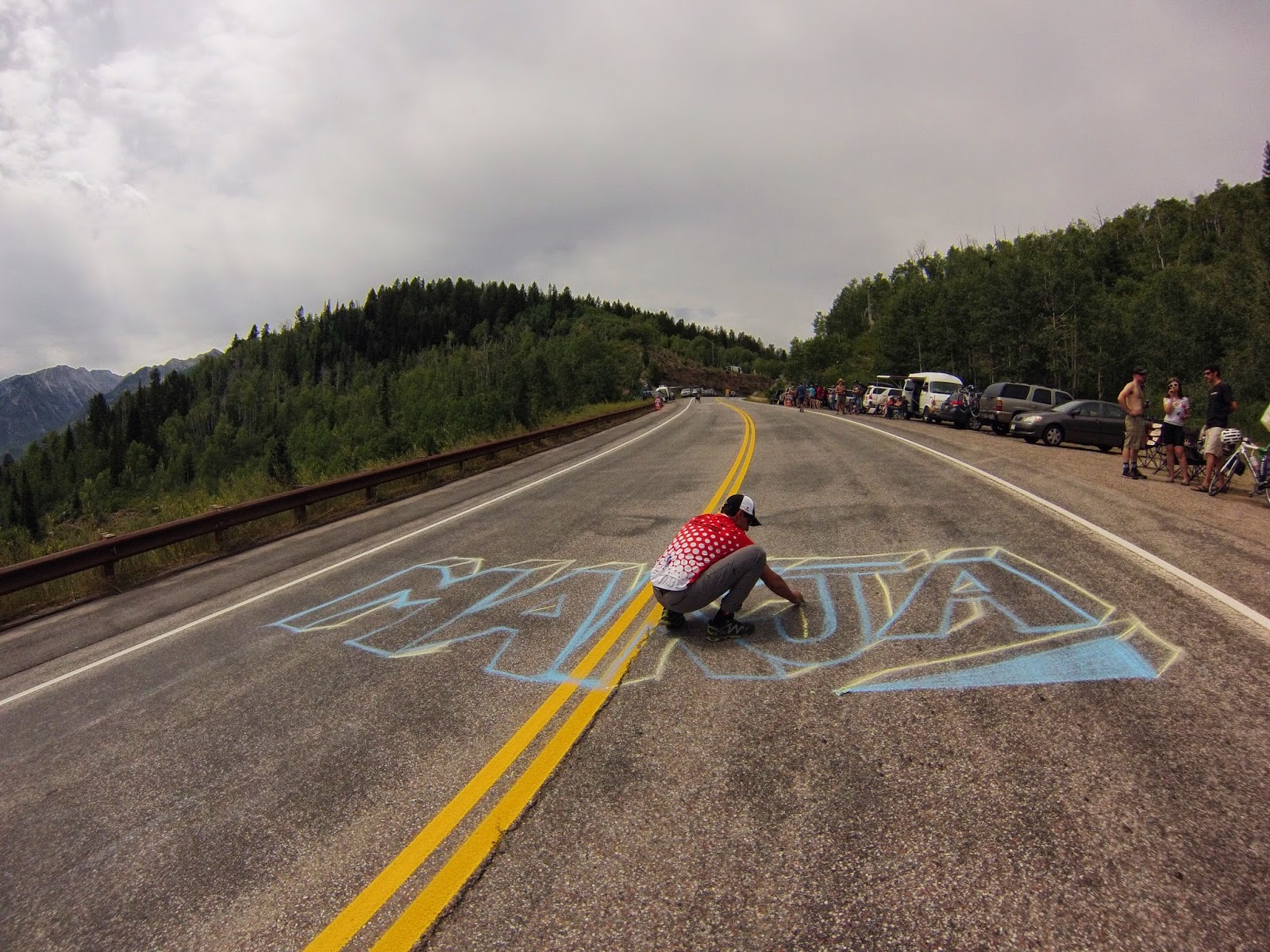 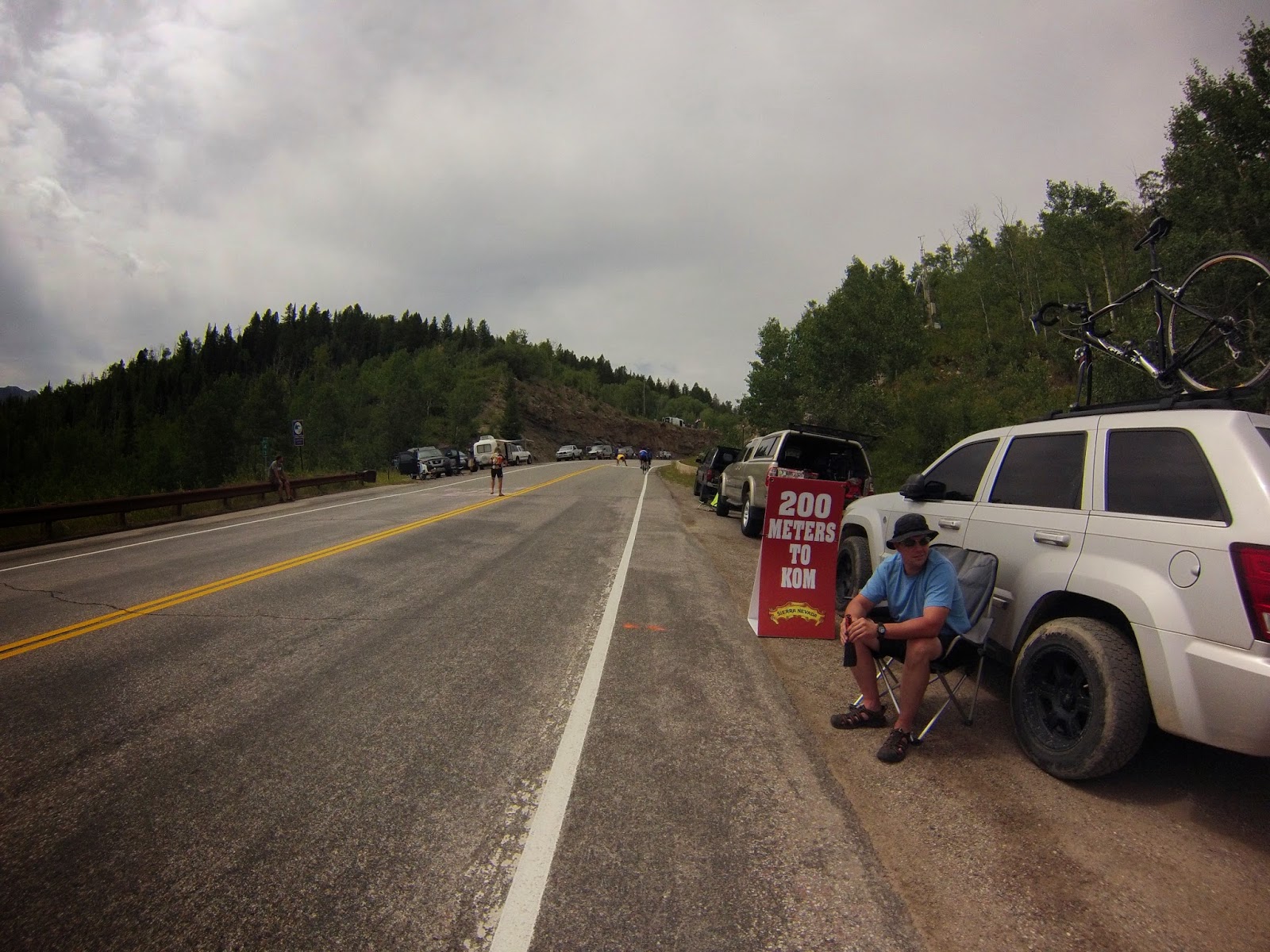 When I first arrived, surprised by how little race fans were around, I set my self up near the 200km from the King Of The Mt banner. And at about this time of surveying my location, the place filled up w/cars. The guy above w/the chalk was a pretty cool dude. He knew everything about bikes, racing, & cycling in general. The guy on the right was a classic. He drives around to each stage and camps out in his car until the race. I don't know if he was loaded or just not used to a person like me asking questions and making small talk. It didn't take long for the " tour folks" to come along. Because the pass was closed to traffic, club riders ride the pass. I mean all day long, old riders, young kids, mt bikers, a guy on a unicycle, and who knows what else. We all cheered as they climbed on by and when I would see a high end bike w/an average rider, my comment was, COME ON LADIES, STAND UP A GRIND!! Well that took off like wild fire. 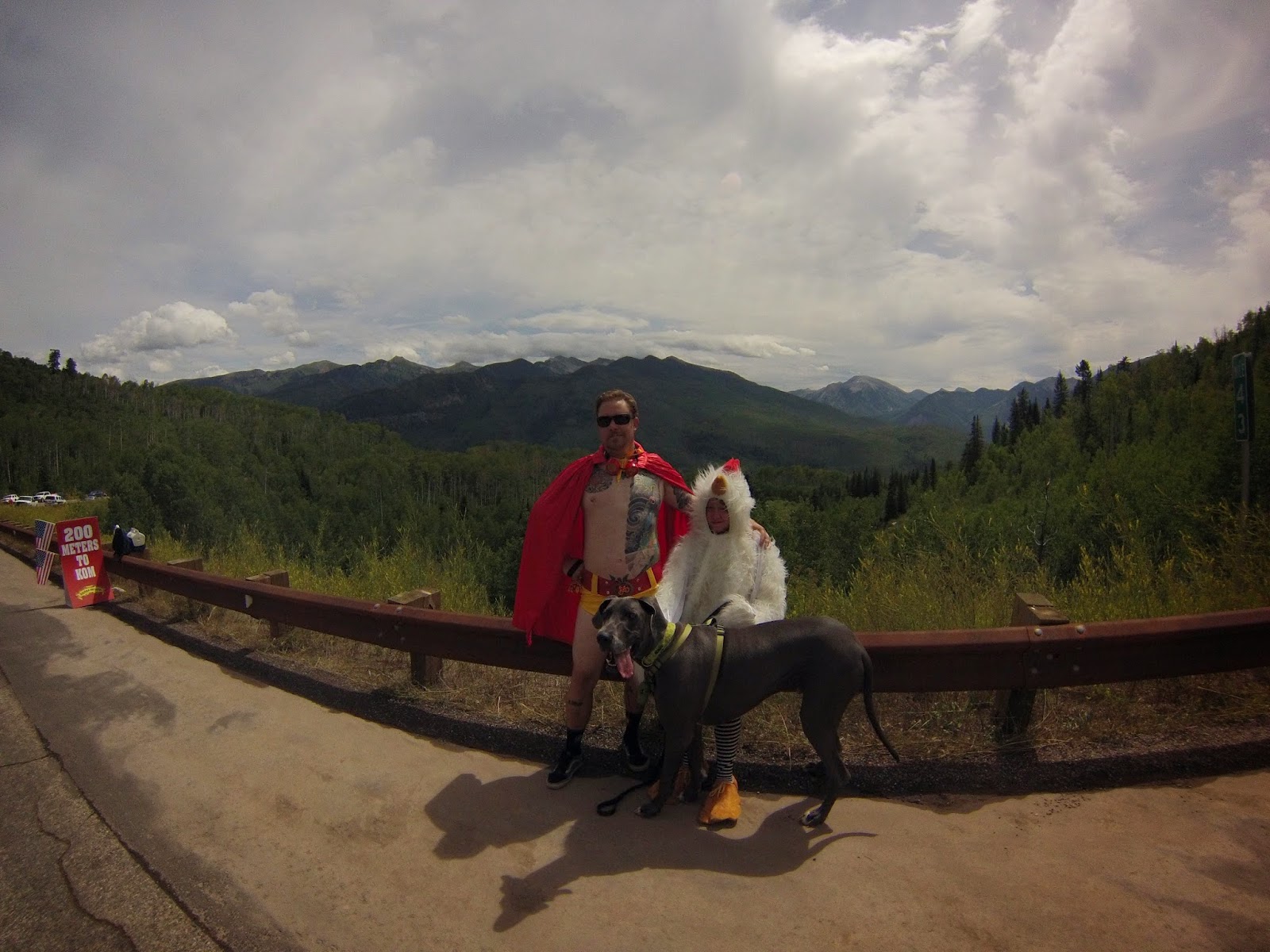 Oh, and costumes?!?!? Classic!!! I saw the dog before the Hulk guy and Chicken Kid and asked for a photo op. They were happy and posed before I could even ask. The lady below had the polka dotted dress was pleased I engaged w/her. She was a weeeee bit tippseee as well. It was all about soaking up the atmosphere indeed. Everyone had ice chest full of beer and never used their lawn chairs they brought along. 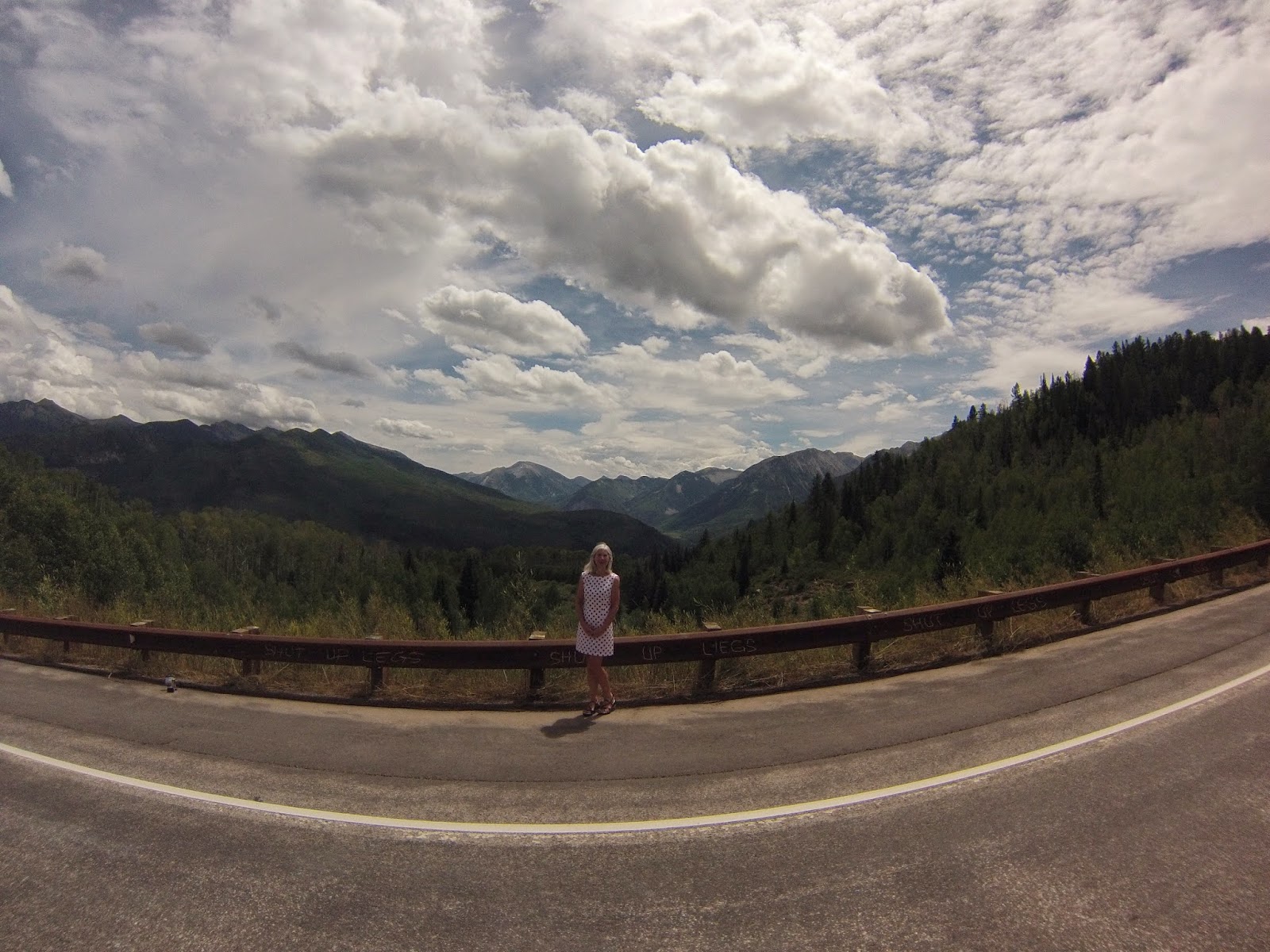 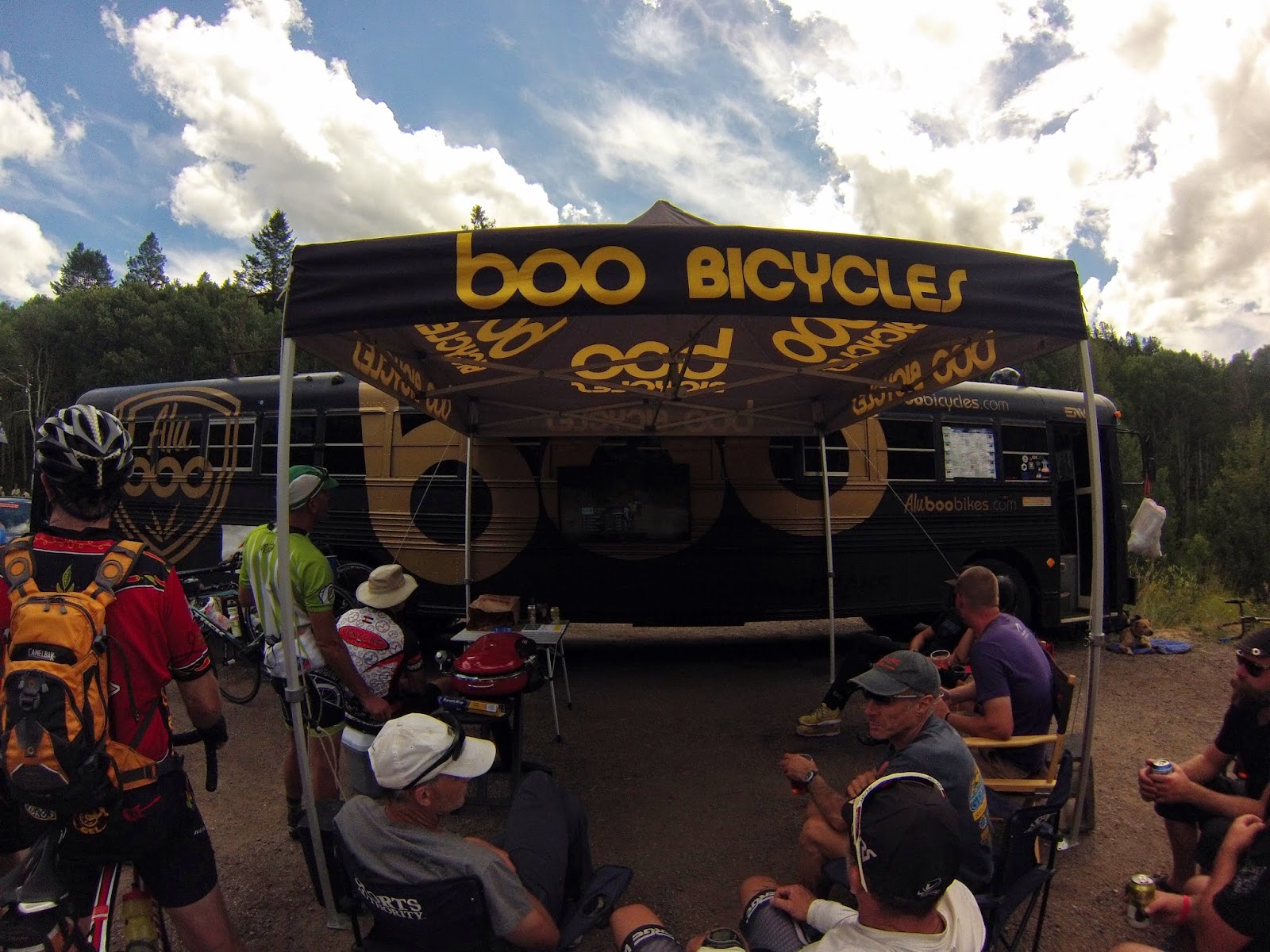 I have videos of the racers and will post ( editing needed ) more on that soon. After the racers flew on by ( up hill ) the real party started. I found myself in this camp and was totally stoked for sure. The boo bicycles were on their game!!! Their bamboo bikes were unreal and will be featured in Outdoor Mag next issue. They had everything, keg, TV Coverage, BBQ, chairs, maps, & much much more. I met a kid from Washington that took his vacation just to come to Colorado for the tour. The more we talked, the more I liked him. He shared our Kebler Pass stories and we both came to the conclusion that this was were we were supposed to be. Up and over in Crested Butte, it was hammering rain, we were dry w/food and beer. I knew I would be driving at some point so I was the ONLY one not drinking off the keg. No shortage of chips, hot dogs, and beer for the group. And everyone was so damn cool. No egos!! Just bike fans and race fans. The best kind. And what totally blew me away, after the NBC Sh*t coverage, the owner of boo cycles handed out trash bags and said, " We Clean The KOM now," Thats what we did. We picked that place clean from old discarded Natural Light beer cans, candy wrappers, & one old tire. What a feeling!!! Giving Back!!! Smokey The Bear would have been so happy & proud of us. 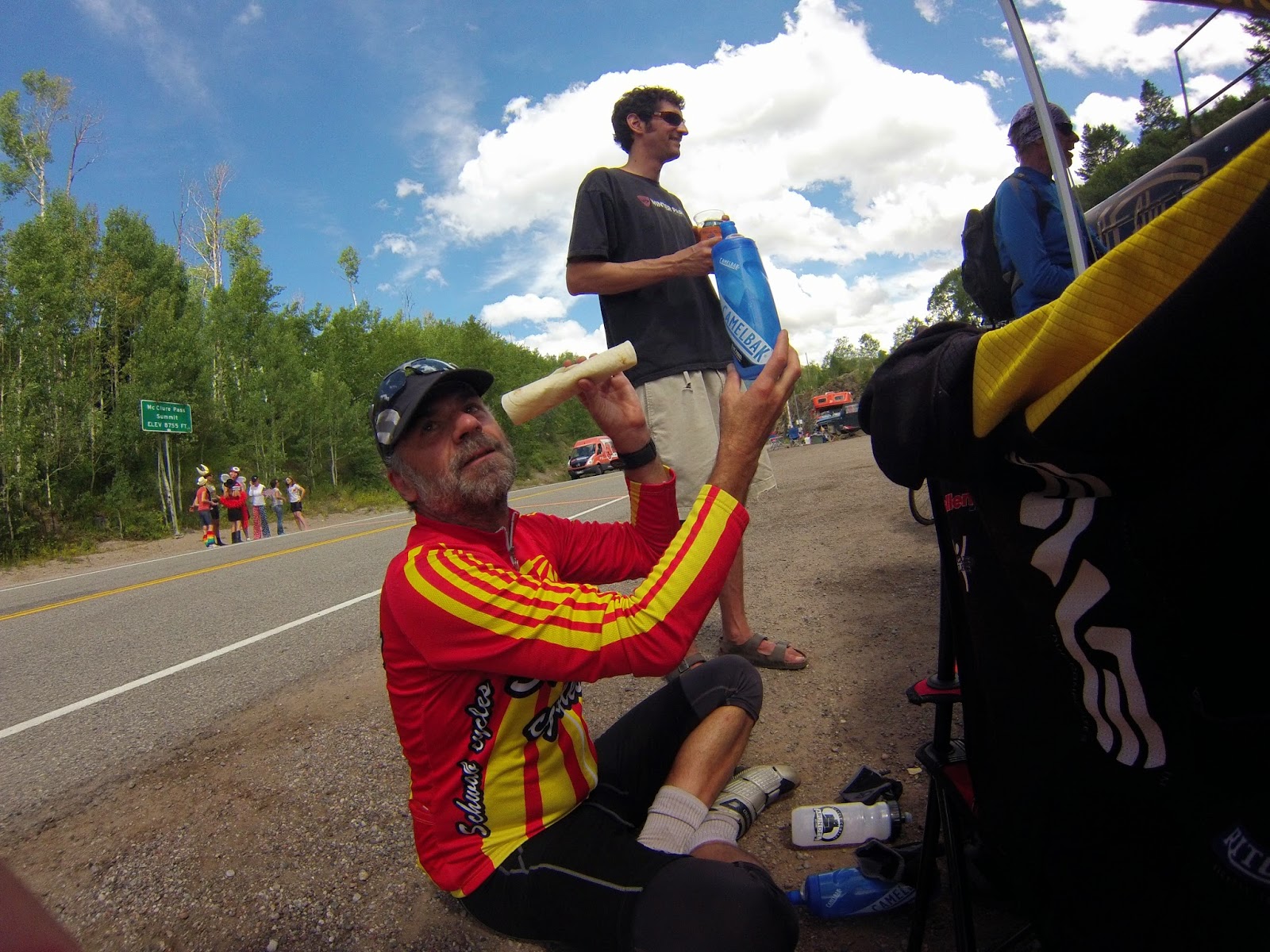 This photo was taken for many reasons. #1 The dress up group on the left. #2 The Garmin water bottle. #3 The hot dog wrap. #4 The happiness of just being on the face of the guy standing. #5 The Colorado Blue Sky #6 And just the epic vernal feeling shared by all. Lots of hugs as we went our separate ways.
Posted by The Padre at 9:48 AM