Back in Crested Butte for Fat Bike Worlds 2020

Welcome Back To Crested Butte!! MAD Racing was once again honored to provide a professional service during Borealis Fat Bike Worlds. Couldn't Be Happier 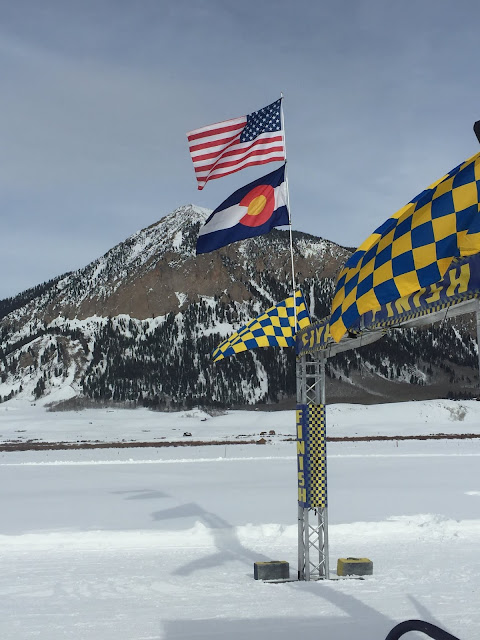 While driving the Tundra with the Red Trailer in tow, about to put on my pissy pants over the lack of wildlife, a magnificent Bald Eagle perched the ready on a winterized Cottonwood limb. The streams flowed crystal clear, creatures of all sorts on the hunt, and my heart was once again rejuvenated with excitement. Elk? Yes Rams?? Yes A Fox or Two? Yes Common Mule Bucks? Yes 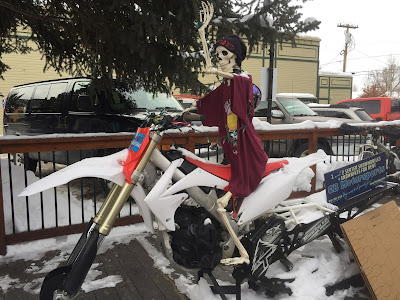 We rolled our wheels into Crested Butte on Thursday by check-in time, dropped the timing trailer in place, and proceeded to stroll forward in search of a beautifully prepared Nepalese meal. Our warm cups of chai was exactly what I dreamed of. Oh Baby 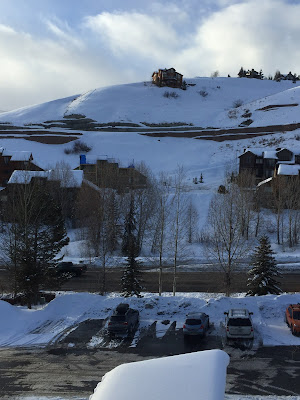 My bedroom window showcased this majestic view that commanded my attention whenever possible.  First thing I did was pull the wooden curtains from my viewing area. Having said that, didn't spend much time THIS spot. A local watering establishment offered up a stool with my name on it. And I Was Quite Thirsty 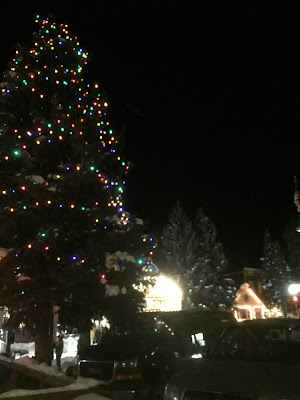 I am a people person generally and enjoy engaging in human interactions. Those conversations that lead to stories and background perspectives. Asking one another how about the workings of or from what part of the world. Maybe its because I appreciate the term/word sympathy. Thats a noun that means to have compassion for or feel sorry about, someones else's sorrow or misfortunes. We all share these styles of tales, just choose to express them differently. Or maybe its empathy as a noun that refers to understanding or experiencing someone else's emotions, or as a shared experience as if it was your own. Or maybe its the simple possibility of stepping into someone else's shoes. 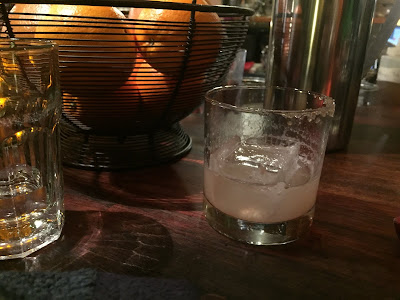 Ether way, creating space for those moment in times are why any one of us travel to destinations known or unknown. Even better, really helps to take advantage of all the FREE public transportation. Insert Your Thumb Up Emoji Here 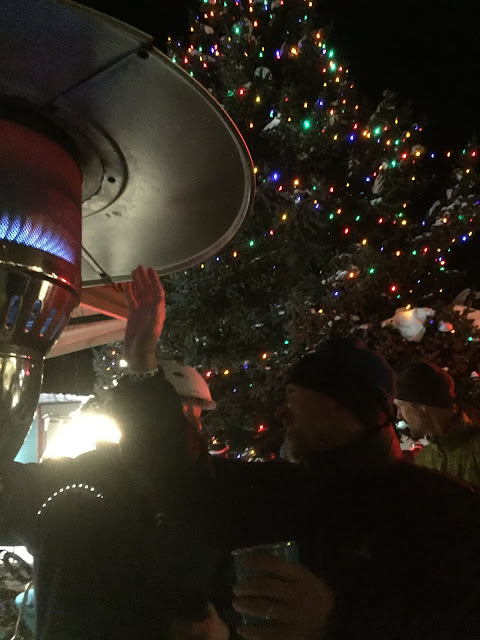 
Fat Bike Polo matches Friday Night took place in front of the Brick Oven Pizzeria and what a Hoot. Wouldn't catch me participating but totally entertaining and highly recommended. Two separate courts on Elk Ave. Timed matches narrowed the field down to two undefeated teams. The final six or so matches were really good and the final was impressive. 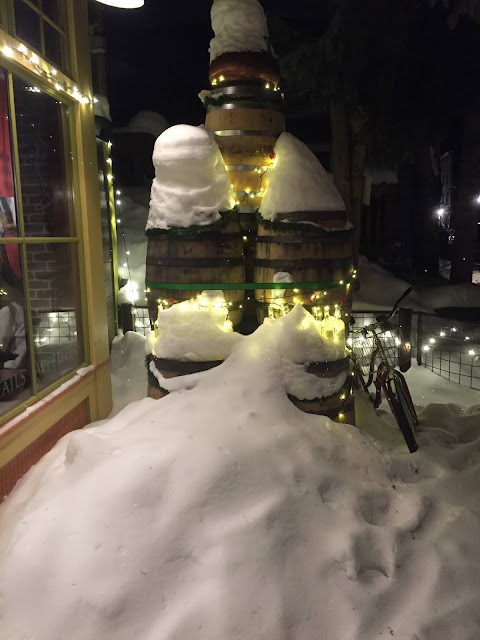 
WELL, not really morning as the race didn't start until 11am. Ok, Sort Of!! I obviously was up sipping a cup of joe and wide eyed to embrace the sunrise in real time lapse mode. What A Beauty 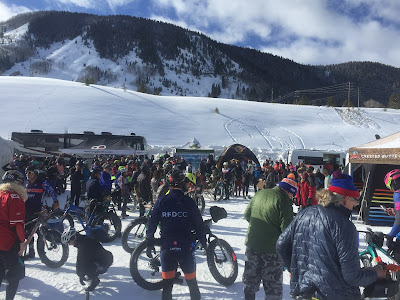 By 8am, we were in the timing trailer to organize, executing protocol procedures, fire up computers, and anchor the finishing arch in its final resting place for the day. The tepid 8F / -13C doesn't really bother me because the UV rays felt ever so balmy and NO WIND. 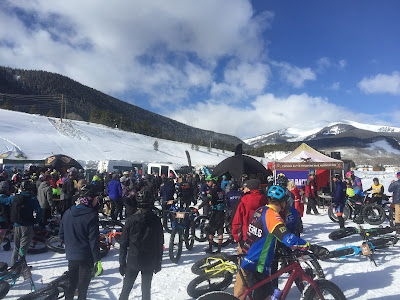 Last minute registrations went smoothly and everyone was"alert" for the racers meeting. Which was actually tastefully conveyed. Not just your typical "watch out for each other" approach. 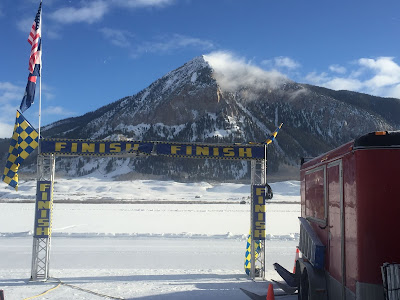 I took that time to explore the venue and see how vendors merchindicesed their products. Notice, minimal movement in the flags?? 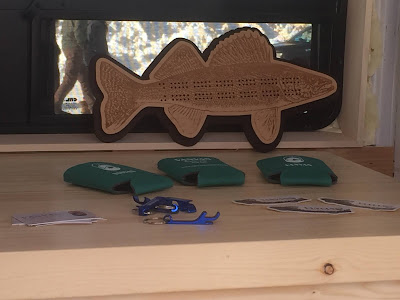 Shortly after the announcements, mortar style fireworks were launched into the sky. Riders mounted up, gears were changing, and they navigated over to their starting positions. Right at 11am sharp, with a proper count down from 10, a flare gun shot a vidivd red flare into the sky above. Racers tore off and the amateurs gave their best battle cries while rolling out. 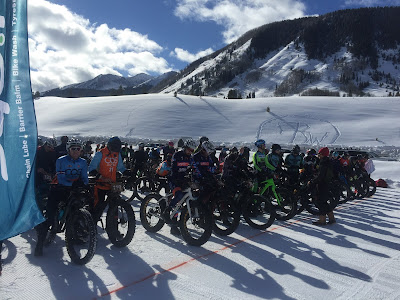 Numbers were up this year but a low costume turn out. Thankfully, Scooby saved the day!! 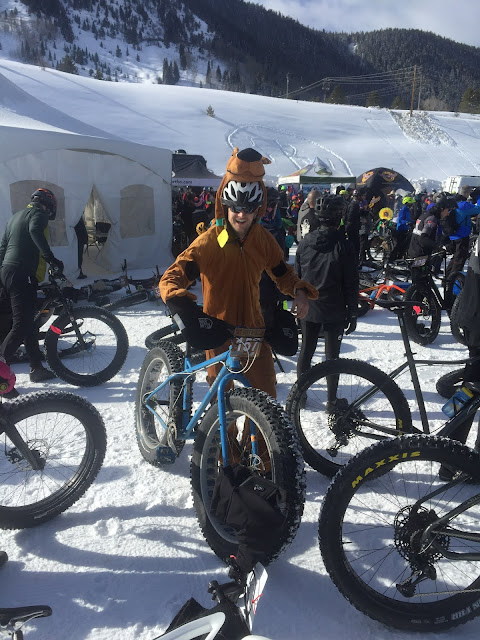 By the afternoon, the winds blew in from the west. Not strong winds but chilly winds. Riders of all ages dug deep and grinned it out. Ready For This??? Only One DNF 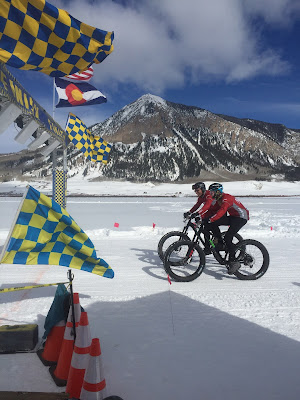 Above is a photo of Steve and his Daughter Sara finishing together. Notice the breeze?? 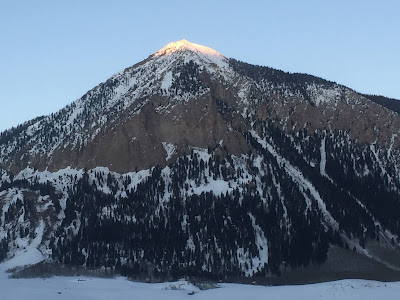 And what a backdrop to the event. I am completely bias for sure but Crested Butte is truly a magical treasure. Look At It, Even The Sky Is Gorgeous 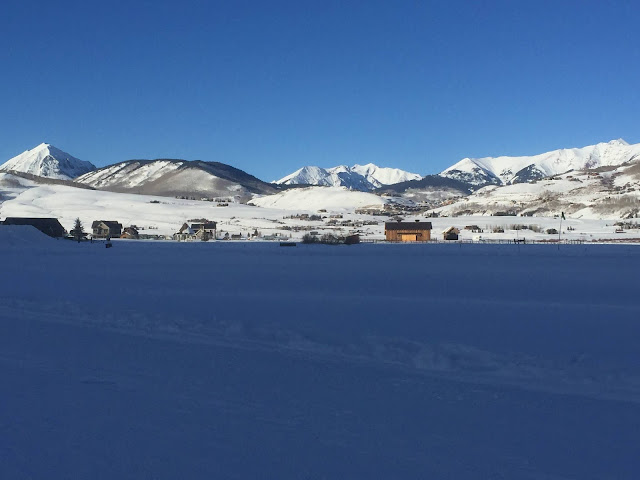 And then the Alternative People from Gunny plugged in and ripped out a few groovy / funk tracks. Durango's own Ska Brewery poured the night away and the tribe dance like nobody was watching. 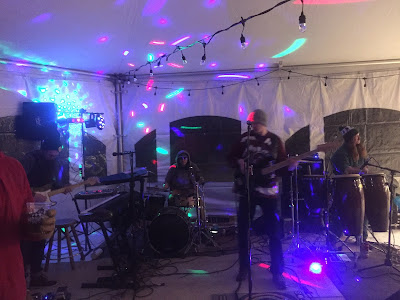 
Celebrating The Boy Dog with a Hike 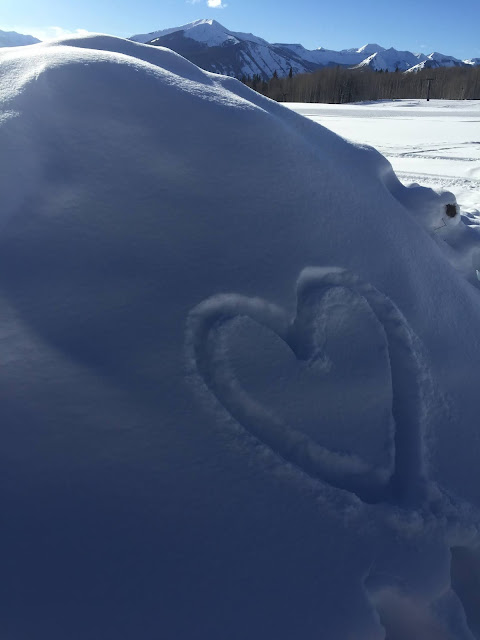 I headed out Sunday morning after a VERY relaxing morning and made my way towards the north side of the ski area. While calling CB home, The Boy Dog & I would climb Prospector Hill almost every evening after hours. Both Summer & Winter Conditions 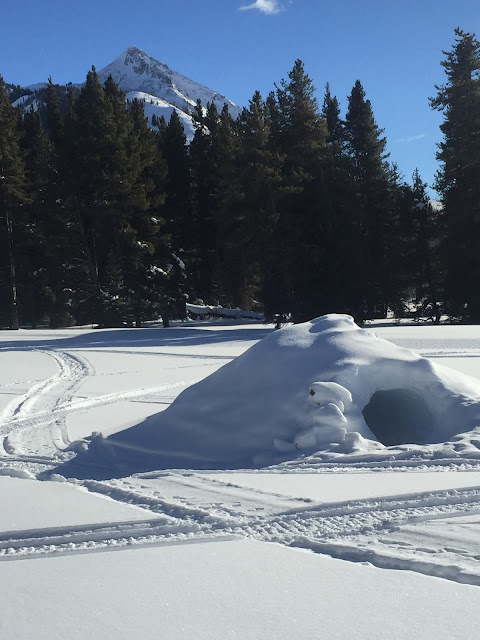 The snow crystals were popping off in full effect under the Colorado Bluebird Sky conditions. Those crunchy sounds were aloft with each snowshoe step. 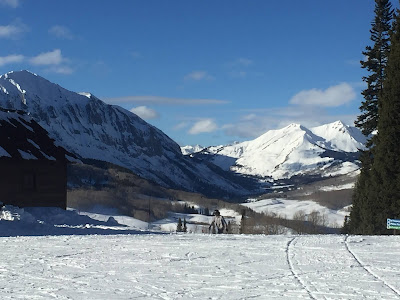 The ski run could have easily been walked on without snowshoes but my thought was to break off the slope and climb up in the powder. 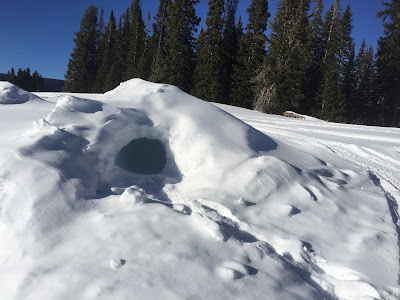 BUT that never happened. I hugged the tree line and focused on task at hand. Thought about the times that The Boy Dog & I shared together as I powered on up the groomed slope. Didn't try and kill myself but never rested ether. Wasn't sad by any means but I really miss talking to the Boy Dog. Not all that busy but a few folks snow boarding effortlessly carved the beginners run. 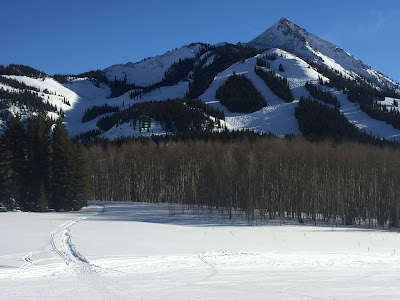 As I crested the ridge of that baby hill, huffing and puffing by the thin air and belly still full of adult spirits, I felt victorious!! 2.39 miles "straight" up sub 40 minutes. Reference Here - The 95 pound Boy Dog wore a full harness and we would climb this run in the Summer in UNDER 20 minutes. ( In the photo above, the white area right of dead center ) The Boy Dog & I would then hike up the run and button hook around that tree line opening. This was our No Excuse Loop. I would look down at him, he would look my direction, I asked if he was busy, he always replied with," My Agenda Is WIDE Open." No Excuse 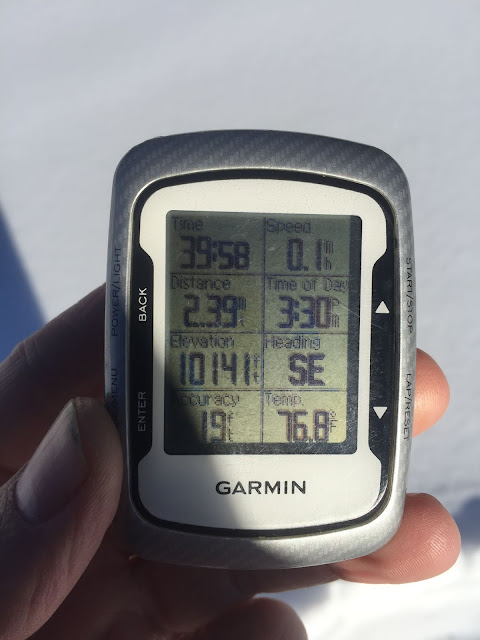 I headed East along the ridge and meandered along the groomed service road. Its a two way dirt road in the summer but its purpose now is a supply trail. Along that route were all these snow "hut" , "cave" , "igloos". Of course I felt compelled to leave someone a heart in the name of The Boy Dog. SHADOW BOY LIVES 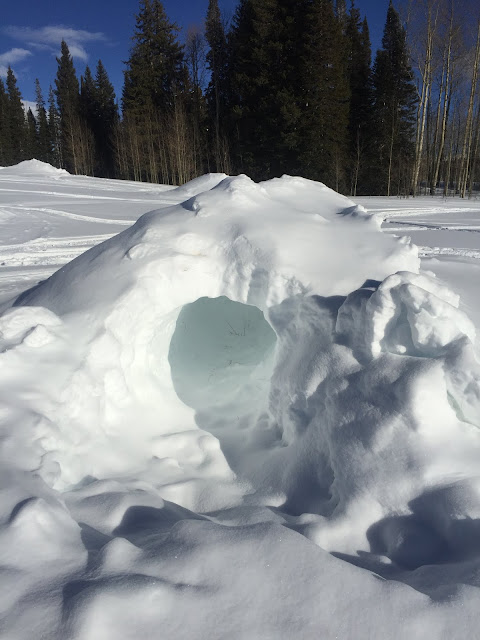 Clipped along until I came to the "loading dock" area and removed the snowshoes. Back on pavement, snaked myself back on down the hill. I couldn't believe my eyes by the amount of new homes and under construction newer houses. Unbelievable 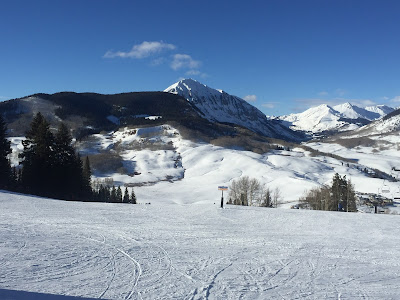 But if I could afford it, I'd purchase two of them. So feel free to call me an american hypocrite. And Yes, If I was independently wealthy, not at all how I would disperse that capital. 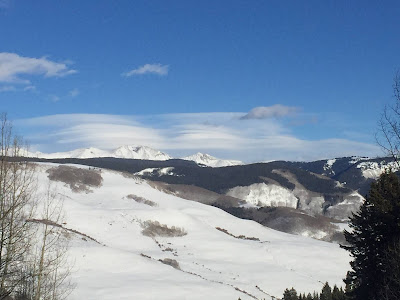 With The Boy Dog on my mind, no apperceiving visceral feelings, I recognized my awareness. It was satisfying to identify inner thoughts without festering or allowing it to consume me. And making these notes here and reflecting on those good times helps. 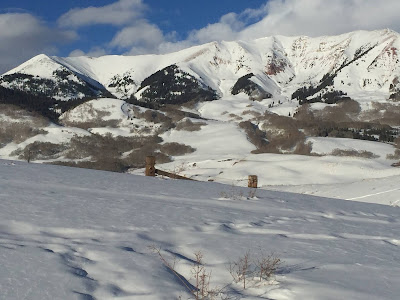 It was a simply wonderful outing of observations, processing old engrams, and projecting unconditional love for this beautiful valley known as Crested Butte Colorado.


After packing up, time to embark, started snowing as we made our last looks under beds, refrigerator, and living corders in general.  Can You Say Dicy??? And With A Trailer In Tow?!? I gingerly tooled on down the highway. Thankfully, I was at the helm as we skirted not one but two separate automobile accents. My Guess, Speed Related 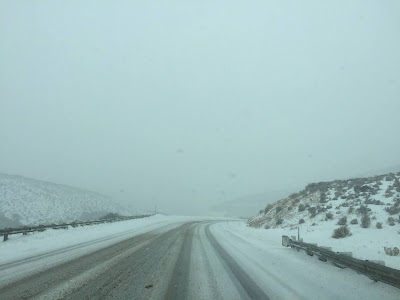 Like I Have Always Said," If I Didn't Have To Live With 9 People And Work 5 Jobs, I Would Move To Crested Butte Tomorrow."

Think Of Others First,
Cheers