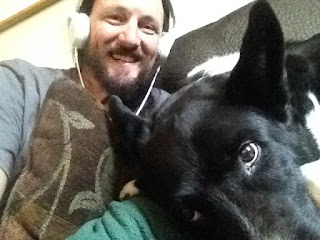 Its the Boy Dog's Birthday Month and its such a difficult time for me. Sure, I enjoy the month of celebrations but rather emotional about his 13th trip around the sun with me. He appeared in my life at four months old and changed my life forever. He's Always #1 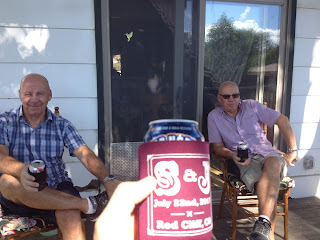 The twins are back again from Australia and were last here in 2015. Its always a gem having them around and I get a kick out of questioning them on their world travels. They average about 80,000 air miles a year and always upgrade double miles on their birthday. 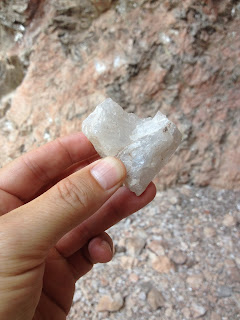 The Dude & I took them up the mica mine trail and I found this little beauty calling my name. I have quite a collection from this summers travels. Shells from Lake Havasu, ocean rolled pebbles from the California coastline, and the smoothest sucker from the mountains of Colorado. Anyway, gorgeous day along the trail as Mother Nature produced some cloud cover and cooler temps for our high desert living. Gotta Like That 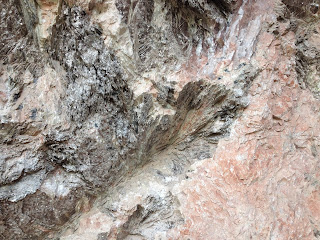 Hosted a sweet Global Groove show last Sunday and I was so into it. Started receiving phone calls during the last hour from people who were completely blown away. "Who Plays Turkish Music?"       " Is This Lebanese?"    " Where do you find this stuff?"    were all some of the questions asked. Had A Gr8 Show 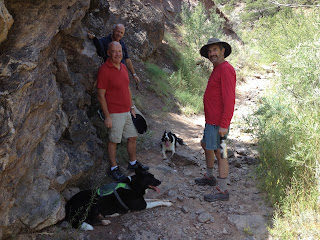 My next show will be hosting the Divided Sky on August 22nd at 9am my time. Will update as we near that date. Love Radio Shows

GOALS:
OK, July numbers on Strava were so lame that they are not worth mentioning. I spent two weeks in SD, an amazing wedding in Red Cliff Colorado, and now the twins are here. What I am saying is this," I am too much of a wussy to do anything hung over but crack another beer."

I' m not joking. I have spent a ridiculous amount of $$$$$ hard earned cash on booze during my birthday month and the twins are here until the 13th of August. Oh Phuc

BUT.... BUT.... Have had almost two solid weeks in the gym. During my first week back, felt relatively strong, I focused on the mechanics during each exercise. Not necessarily light weights but lighter weights and a full ROM. So my goal for the gym is to simply maintain a rhythm and control the weight during each rep.

I love riding my bikes. I can ride casually all day long. My goal for the bike is to gradually increase the milage after the twins head out. My vision will be riding a century during Labor Day Weekend on the midnight racer. Thats So Doable

Another goal will be to incorporate daily intentions and a more detailed blog from my trail runs. Again, I created this blog for me myself and Irene. HA. But this blog has sort of evolved along the way. Some old friends have discovered this blog and a number of really cool bloggers have been following and sometimes dropping a comment. I haven't reached 100 readers in one day but scored 92 hits. Without doing the math, pretty regularly see 60-69, I average about 55 hits per entry, post, update,etc. THATS AMAZING IN MY MODEL OF THE WORLD.

Having floated off there for a second ...... detailing feelings about that trail run, nutrition, mileage, upcoming events, and head space in general. I have even considered vlogging but I am not quite there yet and still unable to justify all the time that goes into editing for the "hits' "affirmations" "recognition" or even accolades. I do waste a lot of my time on 1 minutes and a few second time lapse videos that I have been "producing" for a few years now. But Vlogging interesting and relevant videos??? I don't know

I have a month now to hone in my visions, share my stories, and upload some sweet time lapse videos. Like This Kick A$$ Flight with 88 views. Its also odd to me that 88 strangers have watched my little insignificant moment in time. Crazy


Last But NOT Least >> Ortho - Bionomy << Ortho IS Everywhere