Dig If You Will The Picture   Of You And I Engaged In A Kiss   The Sweat Of Your Body Covers Me    Can You My Darling    Can You Picture This   Damn  If You Can  A Courtyard   In Ocean Of Violets In Bloom    Animals Strike Curious Poses   They Feel The Heat    The Heat Between You And Me    How Can You Leave Me Standing     Alone In A World So Cold    Maybe I'm Just Too Demanding    Maybe I'm Just Like My Father , Too Bold    Maybe I'm Just Like My Mother    She Was Never Satisfied   Why Do We Scream At Each Other    This Is What It Sounds Like   When The Doves Cry 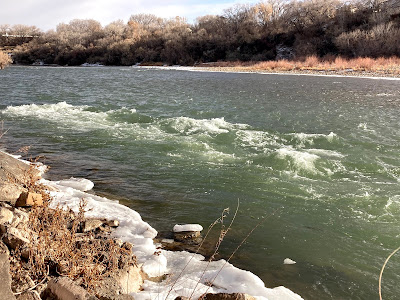 We are arid as all get out but still so damn gorgeous. I am always so amazed with the amount of beauty everywhere when one seeks out the best possible outcome. Sure, we have our rough days but then Mother Nature provides one with a natural soothing sound track at the right time. For the right occasion. During the moment in need. Phuc Yeah Colorado 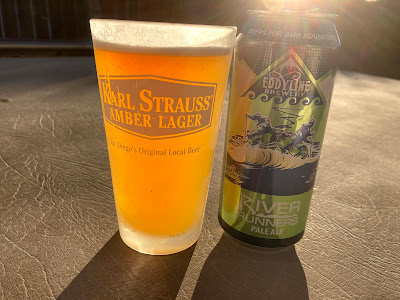 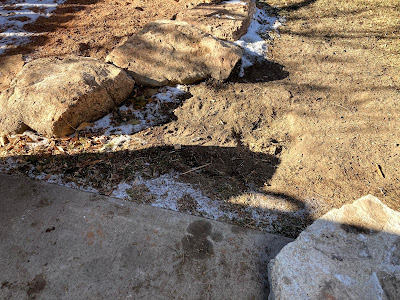 DOGS:
A happy untrained and totally lacking exercised dog began digging holes throughout their backyard. And right off the patio, for an easy ankle roller, they did their best digging. The photo above is of their lengthy sleeping pad, so well dug out for basking in the morning sunshine. "Give It A Try!!" says the dog "Sniff Away Under The Warmth Of Mr Suns Mighty Rays!" 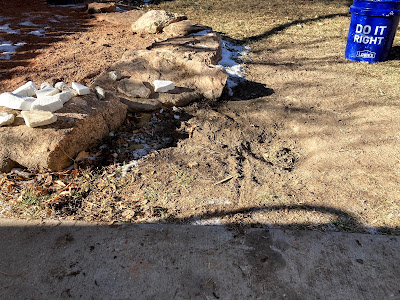 I explained that I have a couple of slaps of concrete from a landscaping job that might help. Here is what I purpose and a few days later, once the ground was frozen of course, they said yes. So a digging I began. This here my friends is what $20 an hour gets ya. 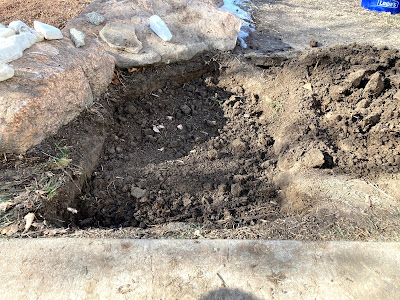 The first slap of sidewalk was 3 1/2 inches thick. Yes, I measured out the area, marked with my shovel, and dug out an extra inch in all directions. Driving the pick axe through frozen clay is soooooo much fun. Thankfully, pure luck really, I didn't pierce their irrigation pipes. Later on, found out that its the old sprinkler lines. Yah0000ooooooo 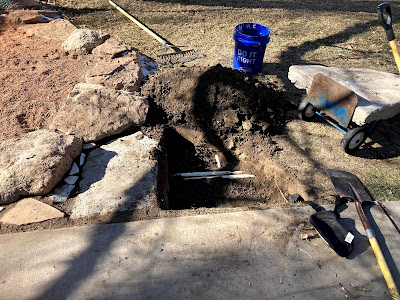 And how ya like that??? First slab down with a few left over marble chunks from this past summers collection as an accent. Fingers crossed that they appreciate the efforts of the littler things in life. The next slab was a triangular bastard that weighed more than I remembered. 30 inches by 37 inches by 26 inches and 5 1/2 inches thick. Oh Joy says the low back. 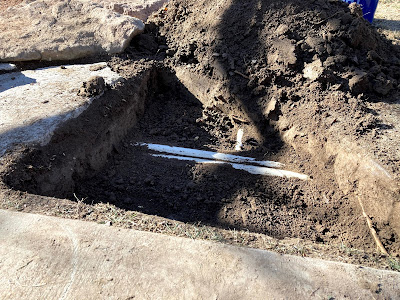 Kind of funny as there were a few times that I really got myself all screwed up in the head. But manual labor removed all those old engrams and onward we go. 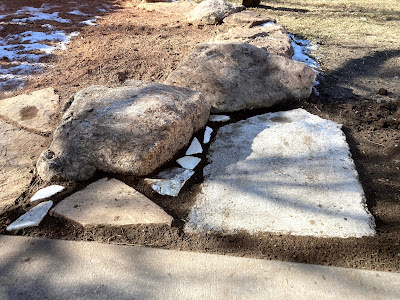 Another project that I came across was this old gate. Very weathered but plenty of integrity left. After a little TLC, the gate was ready to swing open once again. 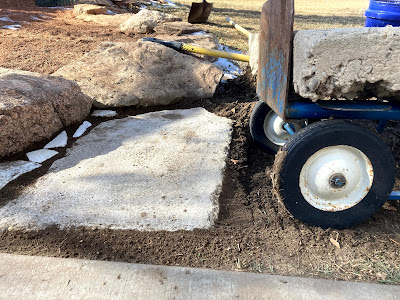 I screwed in two new hinges for maximum swinging action. I passed on going over board by chiseling out the post so that the hing would sink in just below the surface. Mainly, the two older 4x4 posted appeared rough and a little chisel work might not be the best at this point. Ideally, would prefer to replace both post this Spring/Summer and counter sink the hinges properly. If They Want 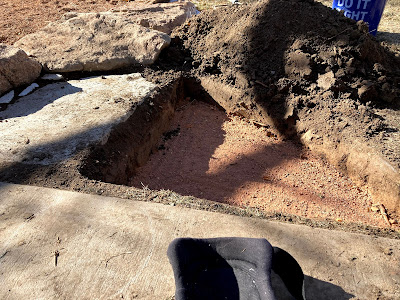 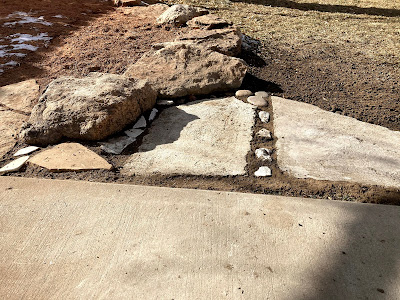 I was lobbing that we replace the entire system because you know how those projects go. As soon as you touch one elbow, start chasing your tail, another trip over to True Value Hardware Store. Its just part of the deal but I was over ruled. "Let's Just Replace The Valve. Wont Take But A Minute." I was told. Sure 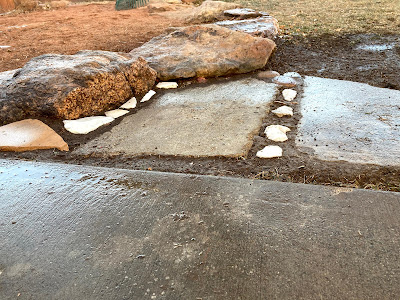 Replaced the old valve, primer before glue, and all seemed just fine. I felt a weeeeeeeee bit nervous as the whole thing became rushed. Not my preferred SOP but again, not my call. 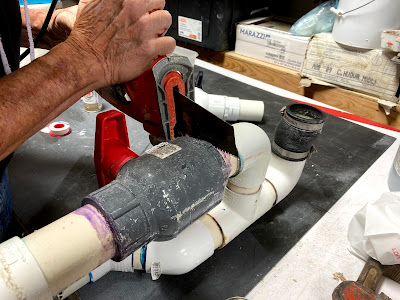 As soon as the jet pump switched was flipped, a tiny little bubble of water presented itself. I was told that I shouldn't worry and the fitting will be just fine. "Takes A Second For It To Settle In Its New Place." but within seconds, I could see we were in trouble. I yelled repeatedly ," Flip The Switch!! Flip The Switch!!" Imagine the Disney character Goofy processing this command. The sound wave vibration entering the ear hole, along the brain stem, up to the brain, slowly engages, and before the hand lifts to flip the switch, POW!! The glue never stood a chance. In a matter of mere seconds, looking away with my hands straight out towards the general direction of separation, we were coated by gallons of hot tub water before the switch was finally flipped to the OFF position. 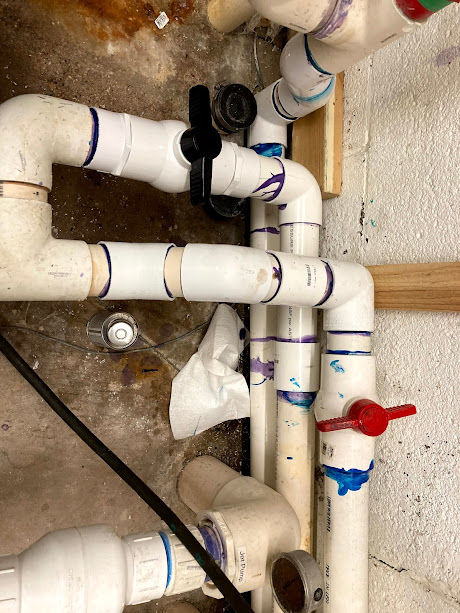 Best line of the day fell from my lips,"Wish We Filmed That Because That Was A $10,000 Americas Funniest Video Winner." Unfortunately, it wasn't a well received comment. Someone was pissed, soaking wet, and would never admit to their embarrassment. Me, oh well, its just water after all. And back to measuring, marking, cutting, and gluing new PVC pipes I went. Solo I Was 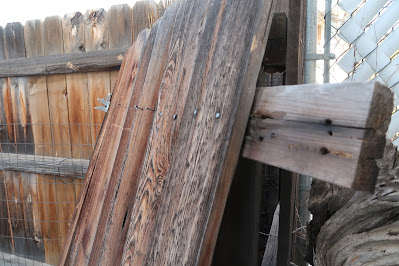 And then, there comes a time for painting, pouring, and creating with acrylic pants. I started these last weekend after finishing all the planter boxes and Christmas Tree cut outs from old discarded wooden pallets. A couple of folks I neglected. They will now receive my latest creations. Truly made with love. 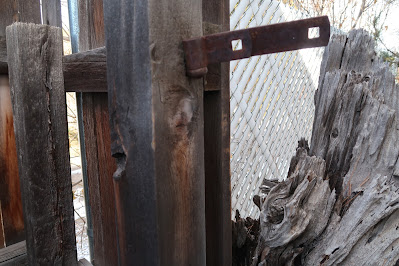 This was my first crack at using a blow dryer to spread out the liquified paint. Everything always appears to be so simple until you take your own stab at it. 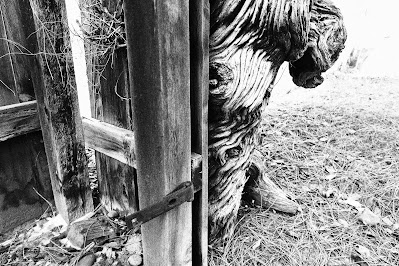 The paint didn't exactly ripple out like I had envisioned but just the same, looks pretty damn cool. And I happily went back in and touched up lines, giving the pieces a little more depth, and just felt groovy adding more flare to them. BoB Ross Would Be Proud 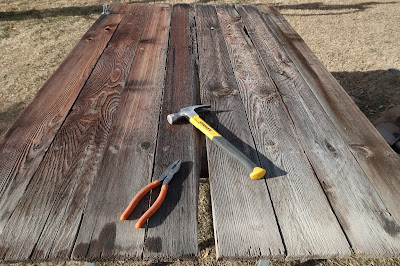 With the left over acrylic paints in their cups, I poured this little gem. And I really liked how it turned out. You know, considering that its the placenta of the art projects. 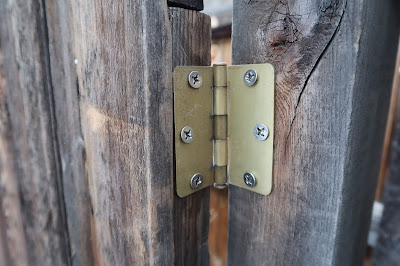 My first thought was that its good enough for a Duran Duran Album cover. Then, with the great conjunction happing, very space like atmosphere. The Holiday Spirits Helped With That Vision 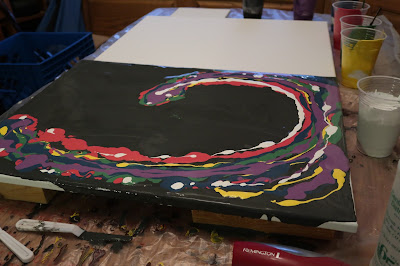 Will post some photos from the next day additions. These pieces actually were still rather wet the next morning. I really anticipated that the hair dryer would have helped draw out a majority of the moisture. But Not To Be 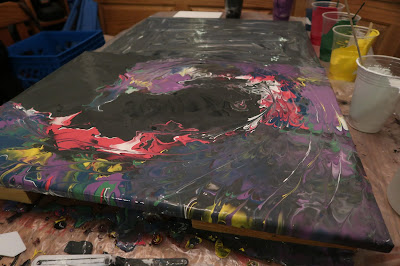 Anyway, it is time to light up the bike with festive decorations, fill the flask with a warm tasty beverage, and ride towards Christmas Lights Extravaganza action. The normal ritual would have been to roll over to Dyer and Janet's for fresh homemade Pozole Verda. Every year, Janet is a retired midwife, families would stop by, socialize, catch up after a years worth of events, and move on. Then, after years/decades of this, those same kids were grown up and walking in with their families. True cycle of life in the mix. Such a wonderful revolving door of entertainment. But Not This Year 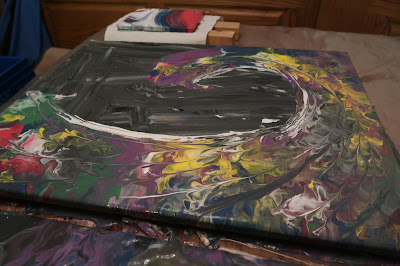 However, I want to express my Hearty Holiday Wishes To Each And Every One Of You!! I thank you so much for following along, for taking the time to comment with your insights and delightful perspectives, and for sharing your own adventures and glamorously creative photos. May you have a delicious Christmas Day or Hanukkah or Ramada or Chinese New Year. However you celebrate, full throttle ahead my friends. Close out 2020 while asking yourself," What Else Is Possible?"   Love & Light 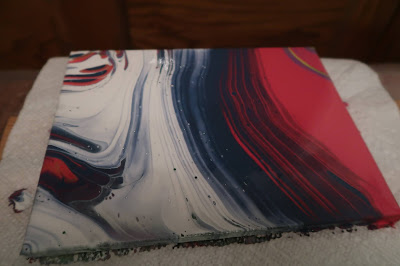 ( HERE ) is a quick one minute video from my day on the bike December 12th 2020. This one is for all of you bird lovers out there. The first clip, when I have mentioned "1,000's" of birds over me, I present to you my evidence. The trees are full of birds and the sky became alive as they took flight. Hydrate Often, Stay Safe, And Think Of Others First