What a magical run!! This week has been in the making for 15 years now and damn did it live up to its expectations!! Friday the 13th offered a Flash Flood Advisory and all of us campers were excited to party down in the rain.

Side Note - Due to drought conditions, designated areas were assigned to cigarette smokers. Brilliant idea for a number of reasons!! Non of us are turned on when someone sets up their camp next to ya and starts puffing away. Plus, the smokers enjoyed each others company in these designated areas. Last But Not Least, No Butts Everywhere

Saturdays line up was just OK until each performer/band took the stage. Tyler Childers was incredible with companied stories along the way. Larkin Poe sounded much better from a far and thats on the house sound and not the act. Big Something was epic!! Mike Campbell from Petty was righteous and all. Sheryl Crow opened with her happy song and proceed to belt out all of her hits. Then, during The Cheese, the sky opened with with rain and the band blew the valley of Telluride apart. I Mean YES

Sunday was an early outing to the ONLY bar that opened at 8:30am for the World Cup Final. A couple other establishments, we heard later, opened at 9:05am. Bastards!! Our watering hole was split down the middle which really made the match even more exciting. I couldn't care ether way and I was stoked with the 6 total goals.

The music was a little less muddy on Sunday but was piss poor overall. New Respects opened up the venue with a number of decent covers. Quaker City will be a headliner soon. Dhani Harrison ( son to the late George ) went electronic and vibrated the valley floor. Chris Robinson looked so shockingly old. Couldn't believe it was him at first, told myself it isn't him, and lucky for him his voice is still stronger than ever. Grace Potter and Joe Russo's Almost Dead sets were totally robbed by weather, lack of ticket holds, and a horrible muddy PA.

Again, the sound for The String Cheese Incident wasn't great but damn that light show was unreal. The drummers opened up their set and the full band proceed to jam and improv until the very LAST second before curfew. The members are clearly enjoying each other and jam sessions were perfectly laid out for ALL to enjoy.


The following weekend offer The Cheese at the ever so world famous Red Rocks Amphitheater for a three night run. Friday's show topped Tellurides weekend and there is no way that they will be able to impress me Saturday. Guess What?? Saturdays Opener, Miss Browns Teahouse, 1st song The Cheese played at my first show. From there, WoW. Amazing. Mind Melting. A Grateful Dead cover into a Led Zeppelin cover, and back into a Dead cover. They went deep, they mixed up the tempos, and they haven't played this tight in about 12 -15 years. Haven't Seen A Bad Cheese Show Yet

I took the opportunity to thank and cross pollinate with some of the original rail riders throughout the weekend shows. I expressed my gratitude and/or explained how they influenced me over the years. Or how they taught me the protocol of the Cheese family. Or shared an experience when that certain person that was in attendance during that particular show. Or for inviting me to witness their wedding vows. And to my surprise, all the folks that I really wanted to see were there at Red Rocks. I am telling you, it was an unforgettable week.

Now, I am keeping this in mind. I missed my mark by 8.1 miles BUT with my travels I missed the opportunity to log miles and shatter the elusive 500 miles club. Reflecting for a moment, the rest/recovery was ideal.

August Goals:
1) I would love to shoot for 609 miles. BUT The Weather Channel just listed all 118 wild fires out west that have consumed 700,000 acres. Our air quality so sucks!!! But Killer Sunsets
2) 100 Running Miles as these legs feel fresh
3) Celebrating The Month With This Birthday ( Beth wished him a happy BARKday Month ) Boy!! He Enjoyed Another Year of Me Cuddling Him, Lifting Him, & Hiding Treats Around The House. Sarcasm There, He Is A BOY Dog After All. 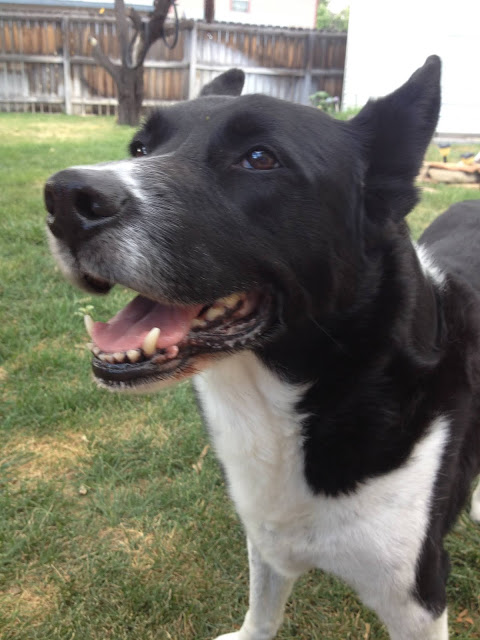 Stay Strong, Keep Yourself Hydrated, & Think Of Others
Cheers
Posted by The Padre at 8:57 AM